Worth The Wait: The Final Weekend of Wimbledon

The Wimbledon finals may not have been thrillers this year, but their routine scorelines should not overshadow the accomplishments of the two champions. 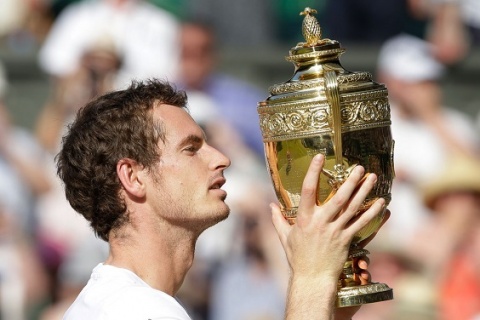 The ghost of Fred Perry had stalked the lawns of the All England Club for nearly eight decades, reinvigorated each year by the hopes of a nation.  Each year, Great Britain had wondered whether their current leading man could crack the code of Wimbledon, a prize that eluded them throughout the Open era.  When serial semifinalist Tim Henman gave way to a true future star in Andy Murray, anticipation surged of a historic feat.

But then Murray inflicted heartbreak after heartbreak upon his compatriots, losing three consecutive semifinals at his home major from 2009 to 2011 and surrendering a four-set final in 2012 to Roger Federer.  Never long on patience, British fans started to question whether he could break through.  They got their first answer last August when Murray won a gold medal for Great Britain at the All England Club, the site of his Wimbledon frustrations.  They got another answer a month later when he won his first major in New York.

Hope thus soared high for Murray’s first visit to Wimbledon as a reigning major champion, and the lanky introvert from Dunblane did not disappoint.  Ditching Roland Garros when a back injury flared up, Murray did all that he could to position himself for excellence on grass.  When he raced undefeated through a small grass tournament in London, he sent a signal of intent for his Wimbledon prospects.  All eyes stayed on him as he advanced through a section of the draw riddled with upsets, not facing a top-15 opponent until the final.  In the absence of Roger Federer and Rafael Nadal, however, Fernando Verdasco and Jerzy Janowicz injected plenty of angst into British hearts.  Murray fell behind early in both of those matches but finished them convincingly as he reached a second straight Wimbledon final. 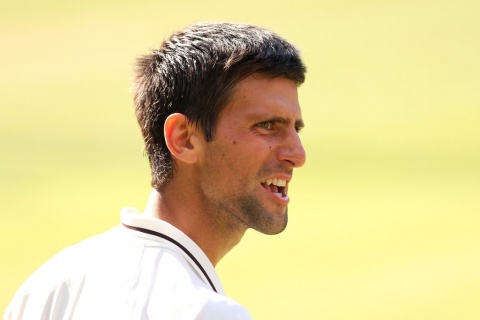 Fittingly, the opportunity to end Great Britain’s 77-year title drought at Wimbledon came against the world No. 1, and a man with a long history of marquee battles against Murray.  Novak Djokovic had faced the Scot in three major finals before, halting him at the Australian Open this year after Murray had won a five-set epic at the US Open last fall.  A Wimbledon champion two years ago, the world No. 1 had defeated two top-eight challengers before the final in Tomas Berdych and Juan Martin Del Potro.

Braced for a battle royale, Murray strode onto Centre Court under the gaze of British celebrities from Prime Minister David Cameron to renowned footballer Wayne Rooney.  He did not detain them long, delivering a startlingly efficient straight-sets victory.  The only potential turning point in the match came midway through the second set, when Djokovic stood within two service holds of leveling the match at a set each.   British minds might have drifted back a year to when Murray won the first set from Federer, only to lose the second and fade thereafter.

No déjà vu awaited here.  Reeling off eight of the next nine games, Murray showed his readiness to free himself from the monkey that had clung so tenaciously to his back.  Although Djokovic would mount another rally midway through the third set, only one destination looked plausible thereafter.  Murray had allowed a two-set lead to evaporate against the Serb at the US Open, and a one-set lead at the Australian Open, so he did not relax his vigilance.  Sweeping the last four games of the final, he laid Fred Perry’s ghost to grateful rest. 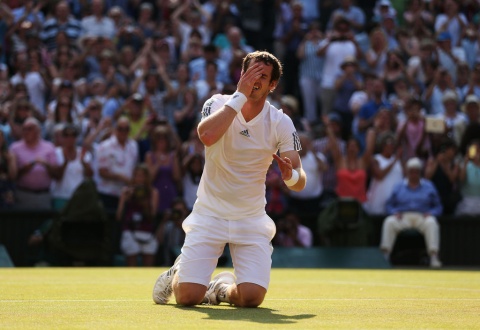 While this triumph marked a massive step forward for Murray, it extended an enigmatic season for Djokovic.  The Serb started 2013 with a 17-match winning streak, including his third straight title at the Australian Open, but he has won only one title since then.  A second Wimbledon final in three years on his worst surface will count as a fine accomplishment, and he came far closer than ever before to solving Rafael Nadal at Roland Garros last month.  All the same, Djokovic produced a startlingly flat performance despite the magnitude of the moment, donating 40 unforced errors.  His epic semifinal against Del Potro might have drained some of his energy, but he has recovered in similar situations before for some of his most memorable triumphs.

Djokovic’s tepid performance in the final especially surprised because of his poised, polished efforts earlier in the tournament, among his best of the season.  Dominant against the Big Four at the Australian Open, he has struggled against them at the other three majors despite his No. 1 ranking.  But he will feel delighted to spend the rest of 2013 on the hard courts where he thrives, and he will rank among the top two or three contenders at the US Open.  In fact, Djokovic is the only member of the Big Four who consistently contends at every major.  Whenever one opportunity disappears, another arises almost immediately. 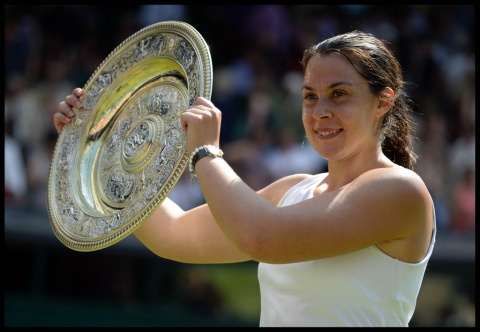 It paled next to Great Britain’s title drought, no doubt.  But Marion Bartoli still must have wondered at times whether she ever would reach a major final again.  Predictably overwhelmed by Venus Williams at Wimbledon in 2007, she spent the next six years searching in vain for a trip back to one of the sport’s grandest stages.  When a second opportunity came, Bartoli did not let it escape her.

The women’s draw imploded at this Wimbledon by the start of the second week, a rare event at recent majors.  Since the start of 2012, the top three of Serena Williams, Maria Sharapova, and Victoria Azarenka had monopolized major titles and most finalist berths as well.  Their absence opened a door for a host of underdogs, of whom world No. 15 Bartoli was not the most prominent.  At the quarterfinal stage, conventional wisdom suggested that 2011 Wimbledon champion Petra Kvitova or 2012 Wimbledon finalist Agnieszka Radwanska would claim the Venus Rosewater Dish this year.  Or perhaps world No. 6 Li Na would have an outside chance to add a second major title.

Overlooked for most of the tournament, Bartoli quietly advanced through a decimated section of the draw without losing a set.  Few envisioned her launching a deep run after her struggles this year, especially with her serve.  As recently as April, Bartoli served 17 double faults in a loss to journeywoman Coco Vandeweghe, and she had not even reached a final since last August.  Nor did turmoil surrounding her coaching situation bode well, for the eccentric Frenchwoman had banished her long-present father abruptly this spring only to recall him soon afterward. 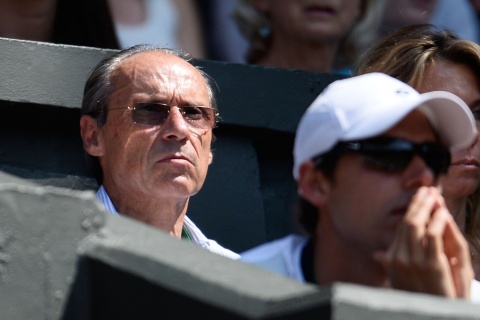 Walter Bartoli, Marion’s controversial and highly scrutinized father, deserves to feel vindicated by what his daughter accomplished this fortnight.  His guidance and care clearly lies at the core of her success, notwithstanding the criticisms of his unconventional methods.  Even heading into the final, most observers discounted Bartoli against the lower-ranked Sabine Lisicki.  They observed that the world No. 15 had not faced a single top-16 seed in the tournament, whereas Lisicki had defeated three.   They also suggested that Lisicki’s formidable serve would overwhelm Bartoli’s notably erratic serve.

One game into the final, the doubters looked justified when Lisicki secured an opening break.  Then the sky fell on Sabine, whose own serve deserted her as she failed to make any impact on Marion’s service games.  The weapon on which Lisicki had built her success at this Wimbledon and previous Wimbledons collapsed as the Frenchwoman tore through 11 of the next 12 games.  A flurry late in the second set proved too little, too late as Bartoli captured her first major title, losing just eight games in the semifinal and final.

Validating her distinctive playing style, Bartoli’s triumph marked the first for someone who swings with two hands on both groundstrokes since Monica Seles won the Australian Open in 1996.  Her father and she have spent most of her career in a tennis wilderness, daring to be different while attracting scorn and ridicule.  Now that she has conquered the most prestigious citadel of the sport, the epicenter of its traditions, even tennis purists must give her respect. 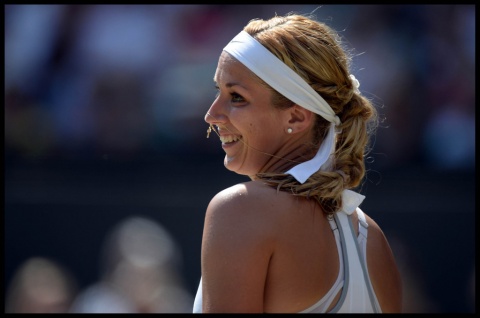 As suggested above, the women’s runner-up played a crucial role in her own demise.  In her first major final, Lisicki could not summon the fearlessness that Petra Kvitova brought to Centre Court on the second Saturday two years ago.  So bold against top-four opponents Serena Williams and Agnieszka Radwanska, she wilted almost from the outset against the less intimidating Bartoli and never showed the many reasons why she reached this stage.  Lisicki has plenty of illustrious company in that area, joining Ana Ivanovic, Samantha Stosur, and Vera Zvonareva among first-time major finalists who could not master the moment.  Surely thinking back to how she felt in 2007, Bartoli put her arm around her vanquished foe as they left the court.

And so Lisicki was left in the strange, sad position of someone who had achieved far more than anyone had expected in the best tournament of her career and far less than most had expected in the biggest match of her life.  But the German with the irrepressible smile and the fearsome serve will bounce back soon enough, recognizing that the positives far outweigh the negatives in her magical fortnight.

For all four singles finalists, Wimbledon 2013 will remain permanently engraved on their memories.  Other notable names may struggle to forget it as soon as they would wish.  An upcoming article takes a look at some of them, and at the players who conquered them.