It’s hard not to be emotional on Centre Court at Wimbledon, the pristine grass in alternating light and dark shades of green, the silence before a serve, the players in all-white, the umpire in a blazer, the Royal Box, all the tradition. This year Centre Court is 100 years old.

It’s my first time watching live tennis on Centre Court, though I’ve watched on television as long as I can remember.

World No. 1 Iga Swiatek of Poland wins the first set without losing a game. But in the second, she suffers a dip in play to go down 1-3, love-40, but comes back to earn a 6-0, 6-3 victory over qualifier Jan Fett of Croatia.

In her on-court interview, Swiatek, who is on a 36-match winning streak, says: “It’s my first match on grass this season, so I knew it’s gonna be tricky. 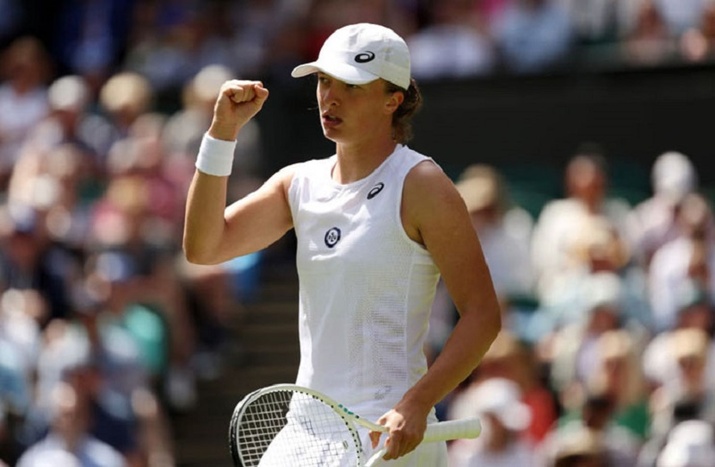 “In the second set at the beginning, I lost my focus a little bit, and she used that pretty well. So, yeah, I’m pretty happy that I came back, and I could finish in two sets.

“I’m just figuring out how to play here and trying to implement all the stuff that we are practicing on. So it’s pretty exciting. It’s a new experience for me.”

This was Swiatek’s first match since winning Roland Garros. Like her hero, Rafael Nadal, her favorite surface is clay and her topspin is soul-crushing.

In her press conference, she was asked about Nadal playing on Centre Court after her. “Yeah, and I don’t even know what’s the score during Rafa’s match, so I’m just trying to be focused on the work. I’m going to watch later, for sure, unless he’s going to finish in like an hour.”

After the match, Nadal said: “Difficult, yeah. Well, something expected because didn’t play on grass for three years. Being honest, he played at very high level for such a long time. He started to not missing balls, serving well, hitting great forehands, and especially great backhands. Normally he has a great forehand. But the backhand today on his side was great.

“Positive thing, I finished the match playing well. The last couple of games I raise up my level without a doubt. That’s give me the chance to end with a victory, no?

“But, yeah, very positive match for me. Of course, there is an important room to keep improving, but I am sure this match going to help.”

It was a cold, windy, mostly sunny day. Nadal said: “When it’s windy, cold, the ball here is very heavy. When the sun is there, in a little bit drier conditions, the ball is a little bit faster, stays a little bit less on the string. Today was a very heavy ball. Very windy out there. Honestly, haven’t been easy to play.

“I was more or less under control with two sets and one break up. But then, being honest, the sun was crazy there. For a righty probably is not a problem, but for a lefty where the sun is, especially when I am serving from the right side of the umpire, was so tough because it was difficult for me to find the spot after the serve. I was losing the ball completely.

“Yeah, he played well honestly, no? He played at very high level for such a long time. He puts pressure, playing aggressive on both sides.

“For me, I say the other day before the tournament start, no, every victory helps. Today was a victory. I spent a long time on court. I really hope that that will helps.

“I think, as I said before, I need to keep improving things. But at the end of the match I improved. At the most critical moment, I think I raise my level. That’s a very positive thing.”