What the Serena Williams and Victoria Azarenka Rivalry Means for Tennis

Two points from the harrowing bluntness of a third set tiebreak defeat in the final of Cincinnati, Victoria Azarenka could have been forgiven for resigning herself to what was sure to be a roaring kick down the final home stretch from her opponent across the net. The assumption was that Serena Williams would rise at the sight of the finish line and crash through the tape with triumphant finality. At first glance, the climax appeared almost pre-determined by some invisible presence above, perfectly poised for the more experienced and greater competitor to rise and win.

Whatever had been expected, however, failed to come to fruition. Two shots later - one missed backhand that had required only the most amateur of shovels into any part of the acres of open court, and one double fault later - the door of opportunity swung wide open for Azarenka. It was all the encouragement the world No. 2 needed. In one swift motion, she swept across the threshold and through the open door, triumphantly slamming it shut behind her.

With it, this victory brought back the single most discussed, important and pivotal issue in tennis. The difference between the sport’s popularity and derelict disinterest, entertainment and the domination that enthralls only those firmly in the corner of the dominant. Finally, at last, there’s a proper rivalry on the block. 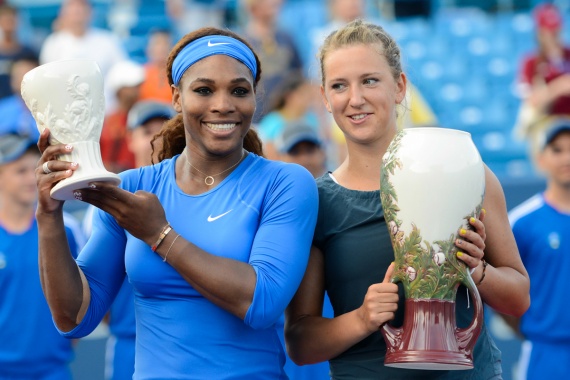 Other sports don’t care for such frivolous issues. For most other privileged sports, the entire concept of rivalries is so inherent - built firmly into their core and inseparable from the essence of the sport - that they aren‘t worth considering. Soccer, for example, found its identity indelibly forged to the backdrop of the fierce and violent frays that tore up Europe for decade after decade. Although the clashes have since been tempered and the violence is largely replaced with simple words and taunting chants, the sport wouldn’t exist without the yearly spectacle of games between teams like Barcelona and Real Madrid routinely descending into pitiful impersonations of some obscure Chinese Kung Fu movie.

But for tennis, the spectacle of rivalries have become its desperately waning life-force. Unlike golf, over the years the sport has endeavored to rid itself of the snobbish country club stench that came embedded inside it from its conception. In part they have succeeded, but the result is of the counterproductive variety. Not only is tennis no longer the hobby of choice for the affluent upper classes, thanks to the raging costs and minute chance of success, it is also swamped by those blissfully affordable sports that require minimum equipment and effort to participate in.

As a result, tennis has descended into a crisis of identity as its general popularity wanes. While in times of need those other major sports forever find security in the omnipresence of the teams and the rivalries that stretch back to prehistoric times or, like golf, the length of time the individuals compete for, tennis is based solely on the rapidly revolving door of individual players and personalities that grace the tour and charm the audiences for a short while before sweeping off into the night.

Once upon a time, there was rightfully little consideration for this as the early years of Open Era tennis appeared to demonstrate a simple yet foolproof blueprint for all future generations - an automatic rite of passage that ensured the survival and popularity of the sport. It was simple; the top established players would rule supreme for a number of glorious years. Eventually, potentially stronger, faster and better young upstarts would rise and make their presence known, first snapping irritatingly at the ankles of the giants before eventually downing them and assuming their throne. The era of Billie Jean King and Margaret Court was soon swept aside by Chris Evert and supreme athleticism of Martina Navratilova, before Steffi Graf rose and was joined by Monica Seles. Soon Martina Hingis swung through, and the Williams Sisters plus the assortment of players following behind eventually joined. Legend after glorious legend was churned out on both women's and men's tours with careless ease.

Despite Azarenka’s victory, the chain has already been broken on the women’s side and the consequent deflated popularity in the women’s tour has been palpable for a good while. Azarenka’s storming victory over Williams last week proved many things; that she is equipped with supreme mental strength that has improved beyond the realms of human imagination, that she is delightfully opportunistic and that she has once more shown herself unafraid of triumphing over the soul who has consistently influcted misery upon her for half a decade. However, it doubled as a clear, harrowing warning into this much craved rivalry - it hinges desperately on the level of the superior player. To wish for the pair to simultaneously play to a high standard, as a top rivalry should, and produce quality of the highest degree means wishing for a well-fought but ultimately routine victory for the veteran Williams. To hope for a competitive classic that leaves audiences grappling desperately to their seats means hoping that Williams arrives in as scrappy, error-strewn form as possible, allowing Azarenka the same opportunities she was offered in their recent battles.

But regardless of what the future holds, Azarenka’s victory and the maintenance of her one hundred percent record over Williams on hardcourts this year has surely transformed the women’s landscape ahead of the final Grand Slam of the year, presenting the most blissfully intrigued pre-tournament expectations for a fair while. 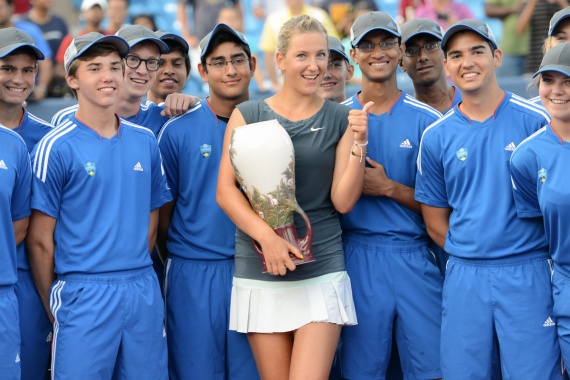