Using the I-Formation in Doubles

Keep your “I” on the prize with strategic court positioning tips from No. 1 doubles team Bob and Mike Bryan 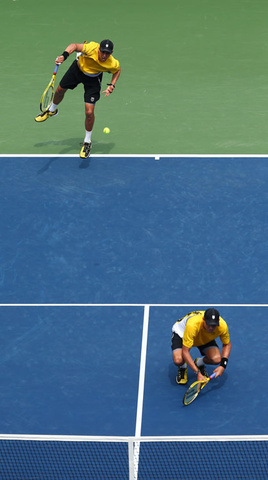 Changing your court position creates opportunities to dictate play by limiting the other team’s ability to take control of the point. A tactic known as the I-formation allows the serving team to use the element of surprise by lining up in the center of the court, then splitting in opposite directions while the receiver is returning the serve.

Are you and your partner ready to spice up your service games? Read on for tips from 15-time Grand Slam champions Bob and Mike Bryan on how to elevate your doubles strategy using the I-formation.

Tip #1: Shake up a team that is consistently crushing returns

Bob Bryan: It’s good to use the I-formation when opponents are returning really well. Psychologically, it’s a way to get their eye off the ball and create some indecision in their return game. We used it a few times recently against Bruno Soares, who really returns the backhand well and returns it hard. And sometimes in the I-formation, he’ll hold his return a little bit longer, and sometimes, he won’t hit it as hard.

MB: We just throw the I-formation in to keep that little bit of indecision and doubt in the returner’s mind. If a guy’s lighting us up and he’s hot - there’s some really good returners out there, so it’s nice to make them think a little bit.

Tip # 2: Force your opponent to hit a tougher shot and prevent the receiving player at the net from poaching (intercepting a ball headed towards his partner)

Mike Bryan: A lot of returners don’t like to return up the line, so when we’re doing the I-formation, we try to make them return up the line  – which is over the high part of the net – and then it takes our opponent's net person, who’s looking to poach, out of the play. We can approach the net and volley up the line, instead of cross-court where our poacher could be waiting.

Tip #3: Aim your serve at the “T,” where the center line meets the back of the service box

BB: When we play the I-formation, we want to serve close to the T. A lot of people who play the I-formation serve down the T because they don’t think that the returner is going to be able to hit the ball up the line in the alley. When they serve hard down the T, the net man [server’s partner] will go to the cross-court and make the returner hit it down the line, which is a tough play to pull off when you’re stretched.

Tip #4: It's risky leaving parts of the court open

BB: One disadvantage is that the alleys are wide open. If a guy can return the ball down the line in the alley, the point’s over. That’s why we don’t use it as much because we don’t like to give the returner an opportunity to end the point on one shot.

MB: I-formation is more of a gamble for the serving team.

Tip #5: If your opponents use the I-formation, adjust accordingly.

MB: On the first serve, we like to make up our mind where we’re going to return. But on the second serve, you have more time to see the play develop, and you can hit it to the guy that’s further back in the court.

BB: Usually when we're returning, we watch the server to see where he’s moving and then hit it towards him. That’s what most of the good returners do: they take their eyes off the net man because usually they’re moving to get your eye off the ball, return to the server so it takes the net guy out of the play.

I-Formation Stance: The server stands near the center point of the baseline to serve, while the server's partner crouches over the center of the service line. The crouching posture allows the server a clear view of the court. After the ball passes over the server's partner, he cuts diagonally forward to the ad or deuce side, while the server covers the opposite side of the court. This movement is often distracting to the receiving team and reduces their momentum. The I-formation is a good tactic to confuse and distract the receiving team and rob them of service return momentum.

1.       Communicate with your partner before the point begins and decide which direction each player will go so both sides of the court are adequately covered.

2.       Line up vertically so that the server is standing close to the center mark and his partner is either on the T or straddling the center line closer to the net.

3.       The server’s partner should crouch down low to stay out of the path of the serve, then be ready to pop up once the ball crosses the net.

4.       The Bryans recommend using the I-formation on second serves aimed at the T, especially on the ad side for right-handed players and from the deuce court for lefties.