This series of daily US Open previews features some of the more intriguing matches in both draws.  Rather than delving deeply into the nuances of each matchup, Fast Forward offers you a few key nuggets on each to remember as you watch. 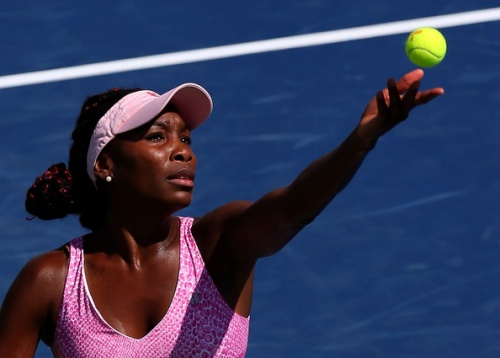 Kirsten Flipkens vs. Venus Williams:  Battered by Sjogren’s syndrome late in her career, Venus must win her matches efficiently if she wins them at all.  The two-time US Open champion raced through a first-set bagel against Flipkens in Toronto, only to wane in the second set and collapse in the third.  On a somewhat faster surface, Venus cannot afford to let the Wimbledon semifinalist slip away again.  She has won just one match since April.

Ryan Harrison vs. Rafael Nadal:  The elder of the Harrison brothers has lost all 19 of his meetings against top-10 opponents.  Among the most promising of them, however, was a three-setter against David Ferrer in Cincinnati when Harrison battled from start to finish.  A dismal 2013 campaign grew brighter when he reached a semifinal in Atlanta this summer, but now the American faces yet another daunting draw at a major.  Nadal has not lost a match on a hard court this year, having played three tournaments on the surface, and few would expect him to exit in the first round at consecutive majors.

Serena Williams vs. Francesca Schiavone:  Igniting the series of Primetime sessions under the lights, this matchup features a pair of major champions.  Serena struggled initially against Schiavone at the Rogers Cup before rebounding to win without drama.  Although the Italian reached a US Open quarterfinal just three years ago, the gap in serving and overall first-strike power should prevent this match from becoming truly competitive.  Never has Serena lost in the first round at a hard-court major.

Tommy Robredo vs. Marinko Matosevic:  A surprise quarterfinalist at Roland Garros, Robredo signaled his revival this year by winning two small clay titles.  Away from his favorite surface, he has compiled results less impressive.  Australian No. 2 Matosevic thus could score an upset to build on his strong summer hard-court results.  He snapped a five-match losing streak with consecutive quarterfinals in Washington and Montreal, the latter as a qualifier, and the fast courts seem to tilt in his favor.

Lauren Davis vs. Carla Suarez Navarro:  The unassuming Davis leapt onto the radar of tennis fans who followed the game closely this summer.  She defeated two-time major champion Svetlana Kuznetsova not once but twice this summer at the Premier Five tournament in Toronto, and then she took a set from world No. 5 Li Na in Cincinnati.  Suarez Navarro has enjoyed the best season of her career, cracking the top 20 for the first time this spring.  Steel yourself for plenty of long rallies while soaking up the Spaniard’s glorious one-handed backhand.

Monica Puig vs. Alisa Kleybanova:  This tournament marks Kleybanova’s first major since the 2011 Australian Open.  Emotions should flood over the Russian as she consolidates her second comeback from Hodgkin’s lymphoma.  Unfortunately for Kleybanova, her game and especially her serve looked rusty in Toronto and Cincinnati, so Puerto Rican rising star Puig enters this match as the favorite.  Puig reached the third round of Roland Garros and the second week of Wimbledon, accumulating valuable experiene at this level.

Virginie Razzano vs. Anastasia Pavlyuchenkova:  Viewers looking for an upset might earmark this match.  Pavlyuchenkova received a seed when countrywoman Maria Sharapova withdrew from the Open, but she may find that fortune less favorable than she first thought.  Famed giant-killer Razzano has reached the quarterfinals or better in two of her last three tournaments, notching wins over Kuznetsova and Petra Kvitova.  Meanwhile, the baffling Pavlyuchenkova has combined four semifinals this year (two titles) with nine opening-round losses.