Upsets at Day One of US Open Qualifying

NEW YORK, NY – As the top players and title contenders gear up for the final major tournament of the season by taking to the practice courts, a group of players ranked below the main draw cutoff have come to Flushing Meadows a week earlier than the rest of the competition in the hopes of winning three matches and qualifying for the US Open.

You won’t see a Maria Sharapova or Serena Williams battling for one of these sixteen main draw spots, but a trip to the qualifying tournament – which began today and runs through Friday – is a chance to see a mix of familiar faces and young up-and-comers, all of whom hope to survive the searing New York sun and book a trip into the main event beginning next week.

No trophies are awarded this week, but the stakes are high: win your matches and become eligible for the hefty prize money given at the Slams, lose and you’re out of the tournament before it even begins.

As Day 1 of the US Open Qualifying Tournament comes to a close, let’s look back at three of the more interesting results, and look ahead to what you can expect tomorrow.

A typical tournament can turn into a dud when it loses its top seed. But Shahar Peer, a former US Open quarterfinalist, was in for a tough fight against 22-year-old Ksenia Pervak. Pervak won the 2009 Junior Australian Open and began 2013 with a tight victory over Caroline Wozniacki in Brisbane. Since then, the Russian (who played for Kazakhstan for the last few years) has struggled with injuries but looked to be in good form in only her second tournament since March, playing over two hours to win two grinding sets against the counterpunching Peer. Pervak will play American wildcard Jamie Loeb, an incoming freshman at UNC Chapel Hill, who won a decisive match over Veronica Cepede Royg. 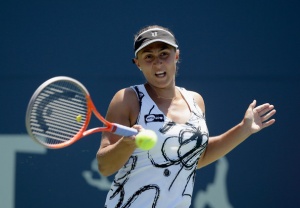 This match was fairly straightforward, but it was an important win for Tamira Paszek. A few months ago, Paszek was seeded in the top 32 for Wimbledon – a tournament where she had made the quarterfinals the last two years. But injuries and early round losses have plagued her year, causing the former Austrian No. 1 to tumble out of the top 100. Looking fitter than she has all year (and wearing Venus Williams’ clean and sophisticated EleVen apparel), Paszek played efficient tennis to dispatch her German opponent to set up a compelling second round encounter with No. 3 seed Andrea Hlavackova. The Czech doubles star made a name for herself in singles here last year, upsetting Maria Kirilenko en route to the fourth round. A win for either player would be massive, particularly for Hlavackova, who stands to lose a substantial amount of points from her ranking should she fail to at least qualify for the main draw.

The qualifying rounds are full of heartwarming stories and intriguing characters, none more intriguing than the enigmatic Kazakh (née Bulgarian) Karatantcheva. Once a rising star at the Nick Bollettieri Academy, Karatantcheva turned heads when she expressed a profound desire to kick Maria Sharapova’s “ass off” ahead of their Indian Wells grudge match in 2004. The teenager went on to win the French Open junior title that year and reach the quarterfinals of the women’s draw in 2005, defeating Venus Williams in three sets along the way. Following a two-year ban after testing positive for nandrolone (Karatantcheva maintains her levels were high due to an aborted pregnancy), she switched to the Kazakh flag, but has become a polarizing figure in Bulgarian pop culture and has suffered middling results for a player who was ranked in the top 40 before being forced off the Tour.

It has been said that when one of the five senses is dulled, the others become stronger. Against the Italian Nastassjia Burnett on Court 7, Karatantcheva played with ruthless aggression from the back of the court, pressuring her opponent on returns and hitting hard and flat off both sides. All of this made up for a lackluster serve; had she not hit 15 double faults, the match likely would have ended much earlier. But Karatantcheva appeared to have righted her serving woes early in the final set before breaking Burnett twice to set up a match against Turkey’s Pemra Ozgen, who won her first ever Slam match today over former top 60 player, Alla Kudryavtseva.

Looking Ahead: What to Watch on Day 2