Upsets and Near-Upsets, Staggers and Statements: Matches to Remember from the First Week of the Australian Open

In the first week of a major, the leading contenders aim to launch their title campaigns with convincing victories that fire salvoes across the bows of their opponents.  Ambitious dark horses hope to deliver statements of their own by ambushing top seeds. Meanwhile, home hopes and sentimental favorites simply seek to make the most of their days in the sun.  This year’s Australian Open produced entertaining matches that fell into all three of those categories, some into more than one.  Relive the ten most memorable here.

10. Kavcic def. Duckworth:  Having defeated one of his compatriots 8-6 in the fifth set to reach the second round, James Duckworth embroiled his legions of yellow-and-green fans in a five-hour epic on an outer court.  Rhythmic chants of “Quack! Quack! QUACK!” resonated through a thrilling comeback against Blaz Kavcic that barely fell short in an 18-game final set.  Down two sets to one, Duckworth first extended the match with a valiant fourth-set tiebreak and then rallied from 2-5 in the final set to give the loyal Aussies their money’s worth before Kavcic got the last quack.

9/8. Mayer def. Williams / Almagro def. Johnson:  These matches followed a similar pattern to each other, featuring two young Americans who gave seeded opponents all that they could handle in the first round.  The winner of the Australian Open wildcard playoff, Rhyne Williams won the first two sets from top-30 opponent Florian Mayer and later held match points in the 22-point tiebreak that decided the fourth set, the longest of the tournament.  A former UCLA star, Steve Johnson played his first main-draw match at the Australian Open against world #11 Nicolas Almagro.  Mission impossible?  Apparently not, for Johnson’s relentless attacking game gave the Spanish baseliner all that he could handle for five nail-biting sets of ceaselessly shifting momentum.  Kudos to the seeds for finding their way through, and kudos to these young Americans for competing so creditably.

7. Azarenka def. Hampton:  A year ago here, the American won just a single game from Sharapova.  One hardly would have recognized her in a three-set battle with Azarenka that displayed how much her game, and especially her forehand, has improved.  Although a back injury ultimately proved fatal to her upset bid, Hampton clearly struck fear into the defending champion and world #1 by returning her heavy groundstrokes with interest and sometimes outmaneuvering her along the baseline.  Like the losses of Johnson and Williams, this match shed an unexpected ray of hope on the future of American tennis while stiffening Azarenka’s will for sterner challenges ahead.

6. Simon def. Monfils:  Emblematic of this match was a 71-shot rally that left both men gasping for air.  Simon looked well on his way to a straight-sets victory when he ground down a tired Monfils through the first two and a half sets, but a late break for the latter in the third sent this match deep into the Melbourne night.  Both men began to cramp in the fourth set, and both barely could serve by early in the fifth, compiling over 160 unforced errors by the end.  Like Chardy, Simon impressed by recovering from the disappointment of letting his commanding lead slip away and weathering a tense decider that he won 8-6 in nearly five hours, well after midnight.  Classic it was not, but memorable it surely was. 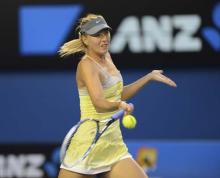 5. Sharapova def. Venus:  The most anticipated women’s match of the first week, this encounter became a terse exclamation point on Sharapova’s nearly flawless start to the tournament.  A three-time finalist in Melbourne, she seized control from the first game of the match with penetrating returns that kept Venus on the defensive from the outset.  Sharapova’s performance recalled her dominant victory over another aging champion, Lindsay Davenport, en route to the 2008 title, and it extended a record-breaking streak of 28 straight games won to start the tournament.  The Russian showed just how much this victory over a fellow legend of the game meant to her with five successive fistpumps when she ended it by acing Venus.

4. Zheng def. Stosur:  There were two narratives to this match, one familiar and one less familiar.  In the latest edition of the familiar narrative, top Aussie woman and former US Open champion Sam Stosur fell flat on her face at her home major yet again, choking away a double-break lead in the final set after serving for the match twice.  But her stumble tells only a part of the story, for the tenacious Zheng Jie fought ferociously with her back to the wall in reminding audiences of her ability to rise to the occasion against the best in the game.  While a woeful double fault from Stosur ended the match, it was a blinding forehand winner down the line from Zheng that set up match point.

3. Chardy def. Del Potro:  Many had picked the Argentine as a trendy dark horse entering the tournament in view of his strong finish to 2012.  Del Potro had appeared to justify the hype with two overwhelming victories to start his campaign, but Jeremy Chardy did not look a bit intimidated.  Having defeated two top-eight opponents last summer, he recorded a third such upset by unleashing nearly 80 winners against a befuddled opponent who lacked the time to set up his own weapons.  An overlooked French talent, Chardy showed surprising resilience in bouncing back from squandering a two-set lead to survive long service games early in the fifth, score the key break, and serve out the upset with panache.  He reaches the second week of a major for the first time. 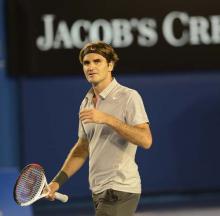 2. Federer def. Tomic:  The most anticipated men’s match of the first week did not disappoint.  Much more competitive than in last year’s meeting with Federer here, Tomic blasted serves and forehands with fearless abandon.  He took the second set to a tiebreak after saving break point upon break point, delighting the Aussie crowd with his newfound resilience.  There, however, Federer displayed the mastery of key moments that has formed the key to his greatness, rallying from 2-5 in the tiebreak to take the last five points with a mixture of power and grace.  Showing his signature coolness under pressure, the world #2 hit serves to corners with laser-like precision while deftly feathering volleys in a dazzling all-court display that future opponents will note.  Tomic posed challenging questions, but Federer had the answers.

1. Robson def. Kvitova:  In a 20-game final set, a star of the future defeated a star of the present during a wild night on Rod Laver Arena.  Erratic from the beginning, Kvitova somehow managed to win the first set by struggling through a series of deuce games, while Robson did the same in the second.  The tennis of the final set fell well short of impeccable, but the tension soared to excruciating heights as both women clung desperately to their serves longer than one would have thought possible.  After the shot-making veered from the sublime to the ridiculous again and again, Robson delivered the decisive blow with a sparkling forehand return winner.  The Brit compensated in guts for what she lacked in experience, while Kvitova limped off with ever more uncertainty hovering above her, and viewers from around the world staggered off to bed trying to make sense of what they had seen.

In the second week, viewers can expect the drama to escalate even higher with some of the nail-biting, prolonged battles that the Australian Open has become famous for hosting in recent years.  Following in the footsteps of matches like Nadal-Verdasco, Schiavone-Kuznetsova, and Djokovic-Nadal was the Sunday night encounter between world #1 Djokovic and Stanislas Wawrinka.  Their match extended over five hours as the gallant underdog stood toe to toe with the defending champion into the 22nd game of their final set.  Never a player perceived as a genuine upset threat to the elite, Wawrinka played the best match of his career in coming within five points of a draw-exploding ambush.  The two men bludgeoned backhands at each other in lung-burning rallies that showcased their fitness as well as the contrast between the top seed’s two-hander and the Swiss #2’s one-hander.

If these matches and those that we described from the first week form the appetizer, what can  we expect for the main course?