Twenty-year-old Greek sensation Stefanos Tsitsipas is through to the quarterfinals of the Rakuten Japan Open. He defeated 19-year-old Australian speed demon Alex de Minaur 6-3, 5-7, 6-1 in two hours and 21 minutes.

It was an exciting, top-quality match between these two rising stars, both at their highest ranking since arriving on the ATP Tour, Tsitsipas at world No. 15 and de Minaur at world No. 38.

De Minaur is a battler. At 5’11”, 152 lbs., he has to work the point and grind down his opponents. But he’s not a counterpuncher. He has an aggressive groundstroke game, taking the ball early and charging the net whenever he gets the chance. 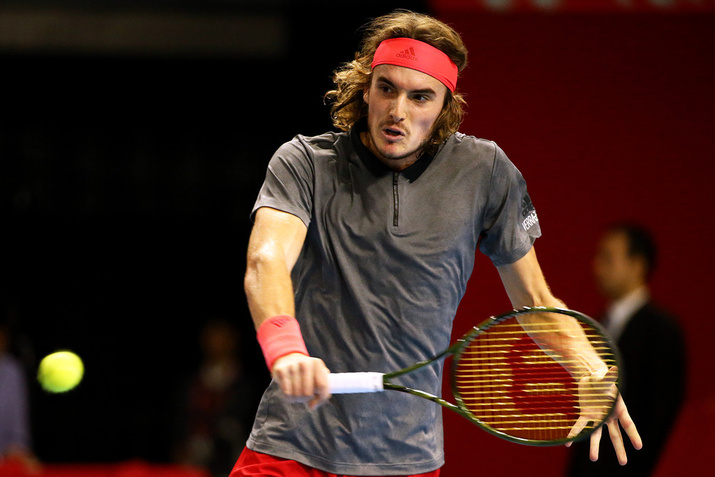 Tsitsipas at 6’4”, 187 lbs., has a fluid game with easy power. He’s also an aggressive baseliner who likes to finish points at the net. Both players have creative variety with their spins and shot selection. They each have modern-day movement. You could hear the violent screeching as they slid around the hard court.

Tsitsipas, serving first, got off to a slow start, down love-30, but then was able to gain control, winning four straight points. In the next game, de Minaur threw all of his body into a blistering forehand that set up a deft dropshot. Then he hit a sublime ace out wide. They stayed on serve until the Australian broke first, leading 3-2. Tsitsipas, showing his mental toughness, broke right back, making it 3-all. In his next service game, with both men showcasing their great feel and explosive strokes, Tsitsipas saved a break point and held with a big serve up the T. De Minaur served next with new balls, but Tsitsipas was in full flow with an exquisite one-handed backhand down-the-line pass to break again for 5-3. Then he held serve easily, taking the first set in 38 minutes.

In the beginning of the second set, it seemed like Tsitsipas could do no wrong. But then de Minaur, at love-2, love-40, showed his fighting spirit and saved four break points to hold serve. Suddenly, there was a different dynamic to the match, and you felt like de Minaur was going to make one of his trademark comebacks. Tsitsipas began to show fatigue, while de Minaur was buzzing around the court. Still, Tsitsipas fired himself up with screaming emotion and managed to get a 5-3 lead.

De Minaur is now serving and down love-30. He gets it back to 30-all. Tsitsipas hits a wonderful, flighty forehand for match point. Then, in an amazing turn of events, de Minaur saves match point and ends up winning the next four games, showing the heart that would make his countryman and mentor Lleyton Hewitt proud.

In the deciding set, Tsitsipas stayed tough mentally and his body seemed to follow. His intensity was back, and he had a key hold in the second game to make it one-all. In a close third game, Tsitsipas was finally able to break. The break point had been his Achilles heel, only converting six of twenty for the match. Tsitsipas, now fully energized, was able to run away with the win, though it was still thrilling tennis as de Minaur continued to battle until the end, even saving a third match point.

The young Greek will now take on the third-seed and Japanese hero, Kei Nishikori.