Tennis Returns With An Exhibition Series

Tennis, like everything, is in a whole new world because of the COVID-19 pandemic.

It’s been almost two months since Indian Wells was canceled, which had the cascading effect on the rest of the tennis calendar being canceled—Miami, Monte Carlo, Wimbledon, the list goes on.

Thanks to the Tennis Point Exhibition Series, held at the Base Tennis club in Höhr-Grenzhausen, Germany, tennis has returned. The first event of the series ran May 1-4.

There are no fans, only the umpire, players, and cameras (no camera operators), with the broadcast on Tennis Channel transmitted by PlaySight, the court-capturing technology. 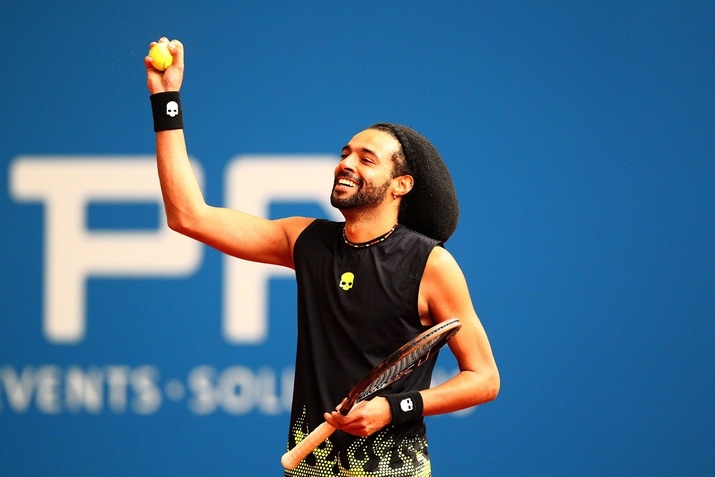 There are no player boxes with a coach or parent or friend, just two lonely souls competing on one indoor red clay court.

The headliner is the flashy German star Dustin Brown who’s been as high as world No. 64. He’s known as Dreddy for his dreadlocks and was made famous by his win over Rafael Nadal at Wimbledon in 2015.

There is not much space behind the baseline to play the high, heavy clay-court game of Nadal, which may work well for Brown, whose best surface is grass and whose style is often called “funky” because of his fast motion (no pause) on his serve and his up-and-down shot making, from spectacular to wild.

Brown gives no rhythm. He can smack a winner or play an out-of-the-blue dropshot. He’s got great feel with his volleys and is fun to watch, and he looks like he’s having fun, often smiling.

The other seven German competitors are still good players who’ve been ranked in the top six hundred in the world, the highest currently is Yannick Hanfmann at No. 143.

All eight players play twice a day for the four days. It is a Fast4 format with a tiebreak at 3-all and no-ad scoring. Each match is two out of three sets.

On the first day, watching on the Tennis Channel, the first thing you notice is the silence. Then you hear the footwork, strikes of the ball. Because part of the venue is open, you hear occasional birdsong.

Dustin Brown won both his matches without dropping a set.

In the middle of the last match, you could hear heavy rain. Then came a delay because a hailstorm caused a leak in the roof. It was the first rain delay, the commentators said, that they remembered happening indoors.

On the second day, on his second match, Brown lost against Hanfmann, though Brown was still smiling, clearly happy just to be on the court.

In the final match on the second day, Benjamin Hassan, who is ranked No. 354 and represents Lebanon in Davis Cup, defeated Constantin Schmitz, ranked No. 584 and a two-time all American at Tulane.

Hassan celebrated by pretending that fans were there applauding. He thanked them, holding his arms up in appreciation, clapping with his racquet as though he were Federer.

A perfect glimpse of tennis in the new world.