Two statistics loomed large ahead of world No. 2 Rafael Nadal’s first-round match against young American Ryan Harrison.  Both of them featured zeroes.  First, the 2010 US Open champion had compiled a 15-0 record on hard courts this year, winning all three of the Masters 1000 titles that he had played on his least favorite surface.  Meanwhile, a hard-fought loss to David Ferrer in Cincinnati had dropped Harrison’s career record against top-10 opponents to 0-19.  Several of those losses had come at majors, where Harrison has faced a series of brutal draws. 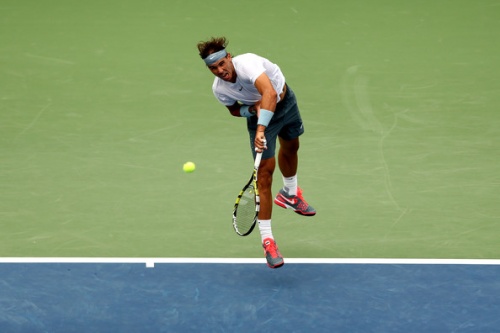 The latest in that series confronted the American with a true test of his confidence, which had risen after he reached an Atlanta semifinal this summer.  Still, Harrison has struggled for most of the last 12 months and never has left a mark on the US Open.  A sensational retrieval of the youngster’s smash in the first game illustrated the defense with which Nadal first blazed his route to the top.  That shot established who was the 12-time major champion and who was the journeyman laboring to stay in the top 100.  Although the two men never had squared off at a major before, practices with each other last week may have given Nadal some useful insights into Harrison’s game.

Two double faults in Nadal’s first service game testified to the wind swirling around Arthur Ashe Stadium, which also caused groundstroke misfires from both men.  A break in the first game proved all that the Spaniard needed to claim the first set, though, since Harrison never earned a break point of his own.  Difficult service games proliferated, and Nadal’s superior poise showed as he won the majority of key points.

Having dropped that first set 6-4, the path grew even more daunting for Harrison.  His history against the top 10 must have flashed through his mind, despite the thrill of playing on home soil in the world’s largest tennis stadium.  A thunderous forehand down the line again earned Nadal an early break in the second set.  Always a strong front-runner, he did not allow Harrison to catch his breath.  Nadal appeared to swing more freely on his groundstrokes and grow more aggressive in his court positioning as the match progressed.  Harrison struggled with the lefty serve and could not consistently produce the baseline depth or the explosiveness needed to threaten a mover of Nadal’s quality.

As a result, Harrison began to overcook his groundstrokes and pull the trigger too early in rallies, aiming for openings that did not quite exist.  An insurance break allowed Nadal to pull away comfortably with a 6-2 second set, and his momentum persisted in the third.  Across the net, Harrison’s hot temper began to simmer more visibly as his frustration mounted.  What seemed an easy hold at 40-15 in the first game of the third set turned into a break for Nadal after his opponent donated more reckless errors.

No route back into the match beckoned for the flustered Harrison from there.  Nadal notched his 16th straight victory on hard courts, 6-4 6-2 6-2, as the young American still searches for his breakthrough against the ATP elite.  Harrison never has advanced past the second round at the US Open, while the Spaniard has reached at least the semifinal in his last three appearances.  His quest to continue that streak will continue against Rogerio Dutra Silva or Rogers Cup semifinalist Vasek Pospisil.