A Sunday for Second Chances: The Men’s Semifinals at Wimbledon

For the seventh time in ten years, the Wimbledon final features the top two men in the world.  After a tournament filled with upsets, fans can look forward to a climax worthy of the event’s grandeur. 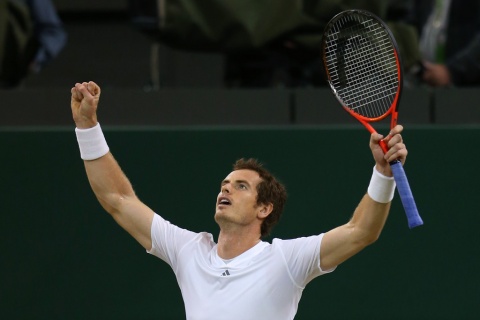 Almost exactly a year ago, Andy Murray bore the hopes of his nation on his narrow shoulders as he strode onto Centre Court to face Roger Federer.  In his first Wimbledon final, Murray set British hearts fluttering when he won the first set and edged within range of serving for the second.  Federer then regrouped to dominate the rest of the proceedings, while his opponent’s momentum steadily ebbed.  Fighting tears during the trophy presentation, Murray must have relived the key turning points of that match again and again as he imagined what he could have done differently.

On Sunday, he will have a chance to remake a 2012 tearjerker into a 2013 heart-warmer.  (Win or lose, of course, the emotional Murray can be expected to shed tears after the final.)  The experience of losing last year’s final will have given Great Britain’s leading man crucial experience on how to handle this moment, and his intensity should burn more brightly than he ever as he aims for atonement.  Murray also can draw inspiration from the memories of his gold medal at the Olympics last August.  On Centre Court, albeit not at Wimbledon, he defeated Novak Djokovic and Federer with national pride at stake.

Losing the first set in both the quarterfinal and the semifinal, Murray subjected his fans to more palpitations than they would have preferred.  Like Marion Bartoli in the women’s draw, he has reached the Wimbledon final without facing a single top-15 opponent.  Upsets of Federer, Rafael Nadal, and Jo-Wilfried Tsonga cracked open the bottom half of the men’s draw from the outset, allowing Murray to feast on cannon fodder like Mikhail Youzhny and Fernando Verdasco.

Expectations soared higher than ever as a result, and Murray appeared to tighten in response.  He survived an ugly five-setter against Verdasco and weathered a bold challenge from the raw Jerzy Janowicz in the semis, finishing that match much more convincingly than he started it.  In the final, Murray can resume his role as the underdog to the world No. 1 and may find that more familiar position a tonic to his nerves.  The bad news for him is that he faces someone equally determined to capitalize on a second chance after a painful disappointment. 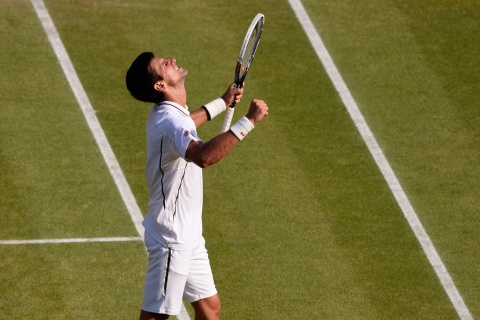 The eighth world No. 1 to reach the Wimbledon final in ten years, Novak Djokovic battled Juan Martin Del Potro for nearly five hours in the longest semifinal ever played at this major.  Just a month ago, a similar semifinal epic cost Djokovic a golden opportunity to complete a career Grand Slam.  He would have entered a Roland Garros final against David Ferrer as a heavy favorite had he not fallen 9-7 in the fifth set to Rafael Nadal.  Like Murray at Wimbledon last year, Djokovic must have relived some of the decisive moments in that match, such as the point when he ran into the net at 4-3, deuce in the final set.

Few players respond to adversity more courageously than the Serb, who has played the most impressive grass-court tennis of his career this fortnight.  Two years ago, Djokovic saw his stunning 42-match winning streak end in a Roland Garros semifinal at the hands of Federer.  But he bounced back by claiming his first Wimbledon title a month later.  History could repeat itself on Sunday against Murray, whom Djokovic defeated in the Australian Open final this year to avenge losses at the Olympics and the US Open in 2012.

In fact, the world No. 1 has spent much of his fortnight exacting revenge on former nemeses for grass stains past.  Djokovic has erased smudges left by Tommy Haas (Wimbledon 2009), Tomas Berdych (Wimbledon 2010), and Del Potro (Olympics 2012) in his last three matches.  He surely would relish the opportunity to reverse his Olympics loss to Murray last year as well.  Whereas the Scot has enjoyed a series of overmatched opponents, Djokovic has built his march of revenge on the bones of three top-15 opponents, like Lisicki in the women’s draw.  That more challenging route to the final may prepare him better than his rival for the tournament’s climax.

On the other hand, Murray should hold a surface advantage against Djokovic, as their only previous grass meeting showed.  At the Olympics, the Scot deployed a more imposing first serve and crisper skills near the net to blunt the Serb’s punishing baseline arsenal.  Those two strengths comprise Murray’s greatest areas of superiority to Djokovic in a matchup otherwise balanced or tilted in the Serb’s favor.  Not without reason has the world No. 2 reached four straight finals on grass, although he has not secured what the world No. 1 did in 2011. 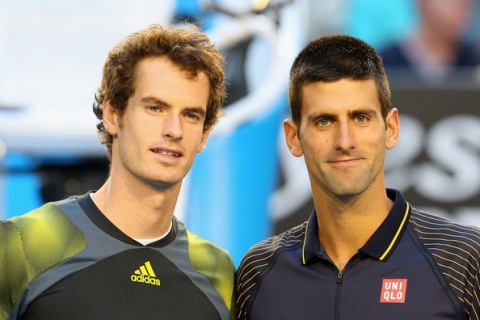 This Sunday clash confirms the defining trend of the men’s game over the last twelve months.  As Federer and Nadal have dwindled in durability and consistency, they have needed to choose their battles more sparingly.  Djokovic and Murray have become the new backbone of the ATP, contesting three of the last four major finals.  Both in the prime of their careers, they should continue to hold the reins for the next few years.  A memorable final on Sunday between the reigning US Open champion and the reigning Australian Open champion would further cement their ascendancy.