Stuttgart: First Round Kicks Off With First Class Tennis

With only 32 players in the draw, the Porsche Grand Prix top players have had to hit the ground running. With many players coming from Fed Cup ties over the past weekend, the slippery fast clay in the Porsche Arena has already produced plenty of fantastic tennis in the first round, despite withdrawals from Simona Halep and Garbiñe Muguruza.

Daria Kasatkina, who has had trouble backing up her success from the beginning of 2018 set a good tone for her clay season with a 7-6(8), 7-5 victory over Elise Mertens. Her first set point came at 5-4 in the first, but Mertens came back and forced a tie break, in which Kasatkina finally took the set on her third chance. After the difficult start she had to the season, this first round victory, her first here is meaningful. Although she struggled at moments, the important takeaway for her is the fact that she could fight past any frustrations to get the win. “I had very good opportunities to close the set early but it didn’t happen and the most important for me was to stay focused and not think about the past which was very important and just play point by point […] And, I was trying to play disciplined and do what I had confidence to do.”​ 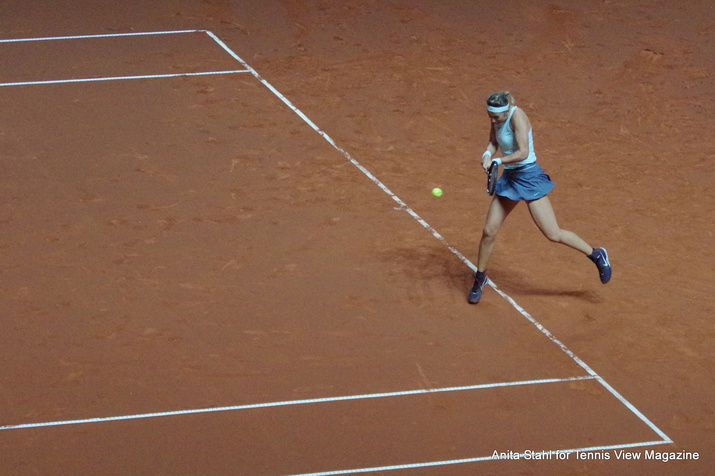 Victoria Azarenka defeated lucky loser Vera Zvonareva 7-5, 6-4 in a match that took 1:44 hrs. While this is by no means an extraordinarily long match, Azarenka’s perseverance is impressive considering she had just gotten off a flight from Australia about 24 hours before and had only managed to practice 30 minutes on the red clay, prioritizing rest. Dazed, relieved, and happy in her press conference, she explained her mental strategy quite simply: “I think the game here with the court and conditions it’s not going to be like too many long rallies […] I was just really trying to stay one point at a time because if I start to think too much ahead I would lose my focus and to keep my focus today was not easy obviously with the circumstances.”​

Belinda Bencic defeated qualifier Mandy Minella 6-2, 6-4. While clay is not her favorite surface today, she did have significant junior success on the surface, winning the 2013 Junior French Open. Only recently mounting a comeback from injuries that just about kept her off clay for three years, she is not putting pressure on herself: “For this season I really want to try to get consistency. I’m making the goal maybe just to win one round in every tournament. I won a round here, so I’m very happy with that. I have no points to defend, so it’s really relaxing for me and I can only go up with the ranking points.”​ 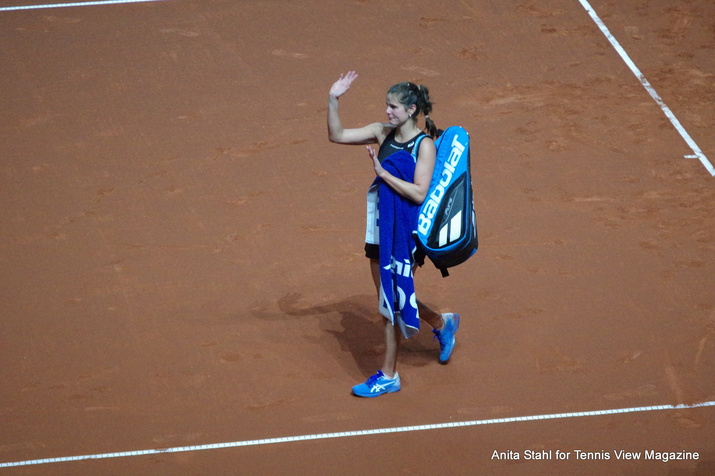 Local favorite Julia Goerges had to retire from her match against Anastasia Pavlyuchenkova at 4-6, 6-2, 4-0. She was in tears as she left the court. Talking with press after the retirement, she explained that before Fed Cup she had woken up with pain in her neck and back. The inflammation of the vertebras pressed on nerves that caused her to lose full sensation in three fingers. While she tried to fight through the pain this week, she will now move on to prioritize rest and not return to the court until she is back to full health.