All of the Wimbledon fourth-round matches unfold on “Manic Monday,” one of the busiest days on the tennis calendar.  Here is a full preview of how the action could unfold. 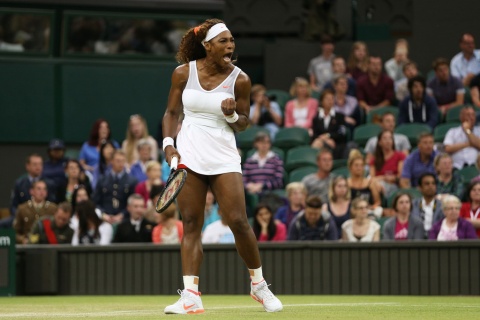 Serena Williams vs. Sabine Lisicki:  The powerful German with the flashy smile has specialized in unseating Roland Garros champions at Wimbledon.  Over the last four years, Lisicki has knocked off Svetlana Kuznetsova, Li Na, and Maria Sharapova after each of those three won in Paris a month before.  This grass specialist bounced Samantha Stosur in the previous round for her first upset of this year’s tournament, but a victory over Serena would deliver the greatest shock of the women’s tournament yet.  Short points and service holds will dominate in a clash between two of the WTA’s best serves.  Serena won their only previous non-clay meeting resoundingly two years ago, and very few women can beat her at her own game.  Serena in two

Mikhail Youzhny vs. Andy Murray:  Justifying his seeding raise at Wimbledon, Youzhny has reached the second week for the third straight year.  But Murray has not lost before the quarterfinals at his home major since 2006, and he has dispatched each of his first three opponents with ease.  Youzhny lacks the powerful serve to thrust the world No. 2 onto his heels, although he is the highest-ranked player whom Murray can face before the final in a half riddled with upsets.  Murray in three 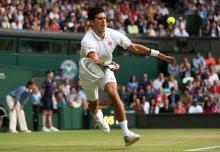 Novak Djokovic vs. Tommy Haas:  The only men’s match to feature two top-16 seeds marks the third grass meeting between these two men.  Haas won the first two, both in 2009, including a four-set victory in a Wimbledon quarterfinal.  Impressive in the last round against grass specialist Feliciano Lopez, Haas dominated Djokovic this spring in Miami.  The Serb earned his revenge in straight sets at Roland Garros last month, but the surface edge may tilt back toward Haas on grass.  Or it may not, for Djokovic plowed through his first three opponents with relatively few of the stumbles, wobbles, and lulls suffered by most Wimbledon contenders this year.  Djokovic in four

Laura Robson vs. Kaia Kanepi:  Both women showed their resilience in the third round, rallying from losing the first set to battle through a tight second and dominate the third.  A former Wimbledon quarterfinalist, as a qualifier in 2010, Kanepi holds the advantage in experience at this stage.  Robson never has reached a major quarterfinal before and must count herself fortunate to survive the unheralded Marina Erakovic after coming within a game of defeat.  She will look to ride the wave of British support past the woman who knocked off world No. 7 Angelique Kerber.  Robson in three 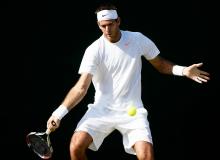 Andreas Seppi vs. Juan Martin Del Potro:  Between the Italian and the South American, the former holds the stronger grass credentials.  That fact might come as a surprise considering Del Potro’s greater height and superior overall talents.  Seppi floundered this year on the clay where he normally thrives, which allowed him to arrive fresher on the grass.  His best Wimbledon performance to date has come at the cost of top-15 seed Kei Nishikori, whom he upset in five sets.  But Del Potro looks ready to record his own career-best performance at the only major where he has not reached the quarterfinals.  Expect his power to break through Seppi’s defenses after some extended baseline rallies.  Del Potro in three

Bernard Tomic vs. Tomas Berdych:  Tomic has risen to the occasion repeatedly this tournament despite the distractions concerning his father.  In his first career meeting with Berdych, he will bring confidence from toppling world No. 9 Richard Gasquet on Saturday.  Tomic rarely goes on a hot streak, but he usually stays torrid when he does.  Playing the big points surprisingly well in tight matches throughout the first week, he should deliver another blow to a disappointing European season for Berdych.   Other than a victory over Djokovic in Rome, the Czech has delivered few of the scintillating performances with which he started 2013 impressively.  Nevertheless, this match could produce some of the day’s finest entertainment and most unpredictable twists.  Outside an exhibition in Australia, these men never have met before.  Tomic in five

David Ferrer vs. Ivan Dodig:  The tough Spanish veteran found the going surprisingly tough against Dodig in Valencia last fall, needing three sets to survive after losing a tiebreak.  In the first week, Ferrer revealed repeated signs of frailty and did not win any of his matches in straight sets.  Due to reach a career-high ranking of No. 3 after the tournament, he must handle his business more convincingly as the opposition stiffens in the second week.  Two of Dodig’s three matches have ended in retirements, but he has won nine consecutive sets after losing his first two sets of the tournament.  The unseeded Croat might start fast and jump into an early lead before Ferrer wears him down.  Ferrer in four

Agnieszka Radwanska vs. Tsvetana Pironkova:  Unlike many of the other combatants on Monday, a long history links these two.  Radwanska has won nine of eleven meetings, including two straight-sets victories at Wimbledon.  Both of those matches unfolded several years ago, before Pironkova evolved into the terror of the Wimbledon turf and a serial quarterfinalist there.  The willowy Bulgarian knocked off Radwanska in straight sets on the grass of Eastbourne last year, and she demolished top-30 opponent Anastasia Pavlyuchenkova last week for the loss of just one game.  Radwanska matches up better to Pironkova’s counterpunching style than to the power wielded by Madison Keys, who extended her to three sets in the third round.  Expect high quality from two women who have played the best tennis of their careers at this tournament.  Radwanska in three

Petra Kvitova vs. Carla Suarez Navarro:  This pair of women also have accumulated an intriguing history, albeit less extensive than Radwanska and Pironkova.  A small Spaniard with a florid one-handed backhand, Suarez Navarro expanded her expertise beyond clay this year as she cracked the top 20 for the first time.  She threatened Kvitova in both of their matches last year, winning one, but she fell meekly to the Czech in January.  The 2011 champion has played just two matches at Wimbledon 2013, each following her familiar rollercoaster pattern..  Extended to a third set in 11 of her last 15 matches, Kvitova needs to progress more efficiently if she envisions a deep run.  Maybe her third-round scare against Makarova will serve as a wake-up call.  Kvitova in two

Roberta Vinci vs. Li Na:  Into the top 10 for the first time next week, the 30-year-old Roberta Vinci has saved the best for last in her career.  Her opponent, who won Roland Garros at age 29, could say the same.  Li’s chronic inconsistency resurfaced last week with consecutive three-setters, the second of which nearly proved her undoing.  Vinci also survived a brush with disaster in a 16-game third set against an unheralded opponent, so both women are playing with house money.  Li handled Vinci comfortably in each of their two previous meetings, however, and she should prevail if she can thrust the Italian onto the defensive from the outset with her penetrating groundstrokes.  Li in three

Fernando Verdasco vs. Kenny De Schepper:  Verdasco probably would consider grass his least favorite surface, yet it has witnessed the best result of his 2013 campaign.  He has won nine consecutive sets, including a surprisingly routine victory over Ernests Gulbis.  That momentum should carry Verdasco through an all-lefty clash with the thoroughly anonymous Kenny De Schepper, into the second week of a major for the first time.  Handed a second-round walkover by Marin Cilic, De Schepper stunned 20th seed Juan Monaco and will hope to catch Verdasco in a complacent mood.  Verdasco in three

Jerzy Janowicz vs. Jurgen Melzer:  Just eight sets sufficed to send Jerzy Janowicz into the second week of a major for the first time, for he sandwiched straight-sets victories around a retirement from Radek Stepanek.  Janowicz delivered one of his season’s most impressive performances by cracking 30 aces past 15th seed Nicolas Almagro on Centre Court.  He often rises to the occasion, in terms of both opponent and setting, so the rising Pole must guard against a letdown as he plays an unseeded veteran on the lowly Court 12.  A former Wimbledon doubles champion, Melzer emerged from Federer’s section of the draw after winning each of his matches in four sets.  At the age of 32, he will hope to keep his opponent’s youthful power in check with veteran cunning.  Janowicz in four

Marion Bartoli vs. Karin Knapp:  A long list of unexpected names fills the lineup for Manic Monday, of which Karin Knapp ranks among the most unexpected.  The native of the mountainous South Tyrol celebrated her 26th birthday in style by reaching the second week of a major for the first time.  Knapp exploited the chaos surrounding Maria Sharapova’s exit, although she recorded a notable victory against top-30 opponent Lucie Safarova.  A win over Bartoli would startle even more, for the world No. 15 yielded just one game in their only previous meeting and has advanced comfortably so far.  Bartoli can reach the quarterfinals without facing anyone ranked higher than No. 70 Christina McHale.  That’s an opportunity too golden for this veteran to spurn.  Bartoli in two

Kirsten Flipkens vs. Flavia Pennetta:  Another veteran who knows how to pounce on an opportunity, Pennetta turned a sure second-round exit into a fourth-round appearance.  A walkover from Victoria Azarenka granted the Italian the good fortune that had eluded her during a largely fruitless comeback from injury.  Pennetta outlasted No. 29 seed Alize Cornet in three sets, turning around a match that she could have lost in two.  Her ranking of No. 166 underrates her talents, but Flipkens has brushed aside her first three opponents in straight sets and should make her grass superiority tell.  Flipkens in two 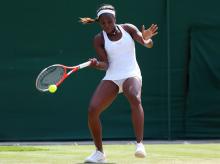 Monica Puig vs. Sloane Stephens:  Seeking her second major quarterfinal of 2013, Stephens faces one of the tournament’s surprise stories for the first time.  Puerto Rican sensation Puig upset world No. 5 Sara Errani at the start of the tournament en route to her best performance so far at a major.  Both women looked vulnerable in their last match, Stephens dropping a 6-0 set to a qualifier and Puig rallying from a set down against an opponent outside the top 150.  The experience edge clearly goes to the American, but Puig has shown impressive resilience more than once this year and will not go easily.  Stephens in three

Lukas Kubot vs. Adrian Mannarino:  The only match not on a televised court, this first meeting between two men outside the top 100 defies the pre-tournament expectations of virtually everyone.  Each man benefited from a key second-round walkover, Kubot from Nadal-killer Steve Darcis and Mannarino from American leviathan John Isner.  To their credit, though, each rolled through the third round in straight sets and has made the most of their opportunities.  Both rankings will soar after the tournament, but only one man can become a major quarterfinalist.  Kubot’s heavier serve, sharper first strikes, and greater experience should allow him to withstand the pressure of the moment better.  Kubot in four