Despite holding only the No. 32 seed at the BNP Paribas Open, Victoria Azarenka entered it with a strong chance to launch a deep run. The 2012 champion had been beset by injuries throughout the last 12 months, which prevented her from competing at her familiar heights. However, Azarenka seemed to shake off some of the rust early in 2015 while weathering a split from long-time coach Sam Sumyk. She came to the California desert after an encouraging second-week effort at the Australian Open and a finals appearance at the reputable February event in Dubai.

A measure of just how much rust she had shaken off would come on Monday night at Indian Wells, when Azarenka faced a familiar foe in Maria Sharapova. The world No. 2 had started the season in scorching form, posting a 16-1 record with a title and a runner-up trophy at the Australian Open. This surge (and her seeding) made her the favorite in this matchup. But Sharapova’s past struggles with Azarenka on outdoor hard courts left plenty of room to suspect an upset.

Of the 13 meetings between the pair, the three most important came in 2012, and Azarenka won all three:  an Australian Open final, an Indian Wells final, and a US Open semifinal. She had not lost to Sharapova on an outdoor hard court in over five years, winning six straight meetings on the surface during that span. Her superior athleticism and ability to transition from defense to offense allowed her to win the majority of the long rallies in those matches. 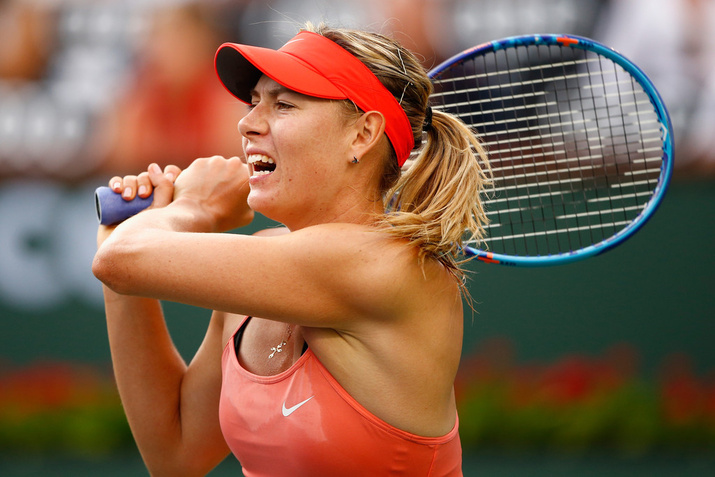 Both women opened play with an intensity appropriate to their reputations. Shrieks resounded through the clear desert air from the first point onward. Sharapova struck four clean winners to hold serve in the first game, but the plot soon thickened. They needed nearly half an hour to play the first four games, which contained plenty of the blazing groundstrokes and inconsistent serving for which each is famous. Sharapova dominated behind her first delivery while struggling on her second, and Azarenka produced a solid but not spectacular success rate on both. The seventh game is often crucial, and a series of double faults by the Russian at that stage led to the first break of the match.

Serving at 4-3 40-15, Azarenka looked ready to consolidate her control over the opening set. A crushing return by Sharapova and some tentative shot selection by the Belarussian halted the momentum swing, though, and Sharapova lost no time in turning the tables. She pounced on the lull in Azarenka’s form to snatch the next two games. With her back to the wall as she served at 4-5, Azarenka fought gamely through yet another series of deuces. She saved one set point, but a deft drop shot by Sharapova created another, and a wild error off her opponent’s racket sealed the first set after a grueling 67 minutes.

Although neither woman had played flawlessly, they had far surpassed the intensity and drama of a standard third-round match. A dip may have been inevitable at the start of the second set, especially for the player who had let a lead slip away in the first set. Sharapova asserted control early in this set, breaking Azarenka twice in rapid succession to build a 5-1 lead. Most opponents would have accepted their fate at this stage. Azarenka is made of sterner stuff, however, and she broke Sharapova for just the second time with a flurry of penetrating groundstrokes.

The next two games—and the last two of the match—returned to a level more similar to what viewers saw in the first set. Azarenka swiped away four match points as she served at 2-5, three of them with sparkling winners. The pressure then rested squarely on Sharapova and her unpredictable serve. With the momentum threatening to slip away, she stood and delivered. A commanding hold sealed a 6-4 6-3 win that was far less routine than the score would suggest.

Sharapova’s first victory over Azarenka on an outdoor hard court since 2009 reversed many of the trends that had defined her struggles against this rival. Despite the slow surface, she largely succeeded in imposing her will behind the first strike off serves and returns. At the same time, Sharapova stayed a fraction more patient in the extended rallies than she had in her four 2012 losses to Azarenka. Her serve did betray her at times, but it lifted the rest of her game when she most needed it. Sharapova had struggled to hold almost constantly against Azarenka during her losing streak against her on hard courts. This time, she dropped serve just twice to one of the best returners in WTA history, once arguably with the match already in hand.

Less than 24 hours from now, Sharapova will need to regroup swiftly to face another persistent baseliner and former Indian Wells champion. Flavia Pennetta has enjoyed her share of success against the Russian on North American hard courts, winning their last two meetings there in 2009 and 2011. Both of those came during Sharapova’s shaky period following shoulder surgery, so the Russian will be favored to flip the script in that matchup as well.