No man ever has collected titles at all nine of the Masters 1000 tournaments in his career.  That feat now lies within reach of world No. 1 Novak Djokovic, eluded only by Cincinnati.  And Djokovic has reached four finals at Cincinnati in the last five years, halted either by Roger Federer or by Andy Murray.  A look at the draw explores whether he can cross that threshold, and who might meet him there. 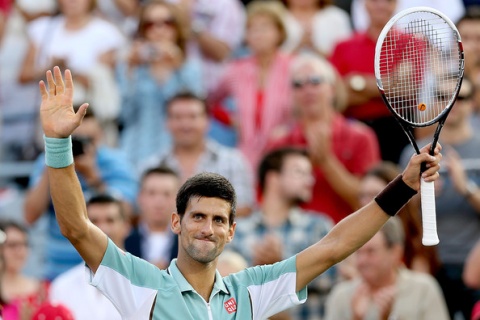 First quarter:  Plenty of intriguing early matches will unfold in this section, but most of them not in the Serb’s vicinity.  Djokovic should cruise to the quarterfinals past struggling counterpunchers like Juan Monaco or Gilles Simon, tasked with a challenging opening test.  Ahead of the Frenchman stands Montreal sensation Vasek Pospisil, who delighted Canadian fans by upsetting John Isner and Tomas Berdych at his home tournament.  With his recent momentum, Pospisil poses a more plausible threat to Djokovic than most in his section.  The Serb could contest consecutive matches against Canadians, for Milos Raonic should relish the fast courts in Cincinnati.  But draining exploits in Montreal and an apparent arm injury there might dull this huge server’s energies, opening the door for a second quarterfinal in two weeks between Djokovic and Richard Gasquet.  A resounding victory north of the border suggested that the Serb has little to fear from that rival.  More intriguing is the possibility of a quarterfinal meeting with Atlanta champion John Isner, who has defeated Djokovic in North America before.  The top-ranked American joins compatriots Sam Querrey and Jack Sock in a section stuffed with quality serves.

Second quarter:  Two men battling recent injuries bookend this section just a month after they met in a Wimbledon quarterfinal.  No longer the top Spaniard, David Ferrer has lost his first match at two of three Masters 1000 hard-court tournaments this year—but held a championship point at the other.  Before Ferrer meets Juan Martin Del Potro in the quarterfinals, he must navigate past Jerzy Janowicz in the third round.  While Janowicz lost to Ferrer in the Paris Indoors final last fall, a strong effort against Rafael Nadal in Canada suggests that Nadal’s compatriot should not underestimate the Pole.  An intriguing contrast of styles and temperaments lies ahead in this section between straightforward American Ryan Harrison and quirky Ukrainian Alexandr Dolgopolov.  Realistically, though, the more challenging route lies ahead of Del Potro.  His US Open contender credentials suffered a blow in Canada, where an ailing back undermined him.  But the Washington champion looks to bounce back against the mercurial Frenchman Benoit Paire and perhaps the serve-volleyer Feliciano Lopez.  Del Potro might prefer facing an opponent who gives him more rhythm, such as fellow baseliner Kei Nishikori. 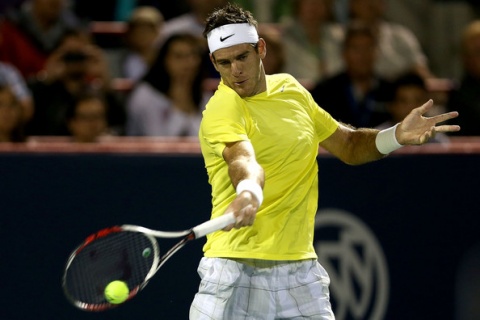 Third quarter:  For the third time since March, the two greatest archrivals in tennis history have landed in the same quarter of the draw.  Roger Federer did not face Rafael Nadal in a Wimbledon quarterfinal, as most expected, but he lost routinely to the Spaniard at Indian Wells.  A back injury troubled the Swiss star during that match, and it appears to have resurfaced this summer.  Federer frequently has found Cincinnati a secure refuge when he struggles at other tournaments, winning five titles in the humid conditions that he handles better than most.  His latest Cincinnati title came at the expense of second-round opponent Mardy Fish, now in the twilight of his career.  A section filled with veterans also includes Tommy Haas, who took a set from Federer in Halle but retired in Canada with a back injury.  Likely to survive these meager threats, the 17-time major champion should not doubt that his nemesis can do the same.  Nadal never has lost on any surface to compatriot Nicolas Almagro, the highest-ranked opponent whom he could meet before the quarterfinals.  Of greater concern is the unseeded Grigor Dimitrov, able to take a set from the Spaniard on his favorite surface in Monte Carlo.  Assuming that Federer and Nadal do resume their rivalry with a first Cincinnati meeting, fans should not raise their expectations too high.  Most recent meetings at non-majors have ended in drab anticlimax. 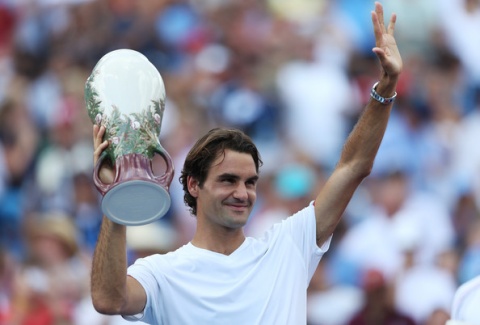 Fourth quarter:  Surely Andy Murray will not lose consecutive matches to the same unseeded underdog?  A similar fate once befell Federer at Indian Wells and Miami in 2007, losing to Guillermo Canas at both tournaments.  Still, one suspects that Murray will pull himself together after his listless defeat to Ernests Gulbis in his second match as a Wimbledon champion.  Cincinnati has proved kind to Murray over the years despite his counterpunching nature, and his fitness reaps rewards in the second half of a Masters 1000 back-to-back.  A long doubles run in Canada may have helped him regain his hard-court footing after a spectacular grass campaign.  If he does elude Gulbis in the second round, or if Mikhail Youzhny stops the fiery shot-maker, Murray should plow through a soft section filled with clay specialists.  July sensation Fabio Fognini came back to earth in Canada after he left Europe and his favorite surface, as did fellow Italian Andreas Seppi.  Roland Garros quarterfinalist Tommy Robredo has not threatened on hard courts for many months, while Swiss No. 2 Stanislas Wawrinka lost his Canada opener.  Few upsets loom, therefore, which likely means a rematch of Murray’s US Open semifinal last fall against Tomas Berdych.  The Scot has held the edge over the Czech on hard courts recently. 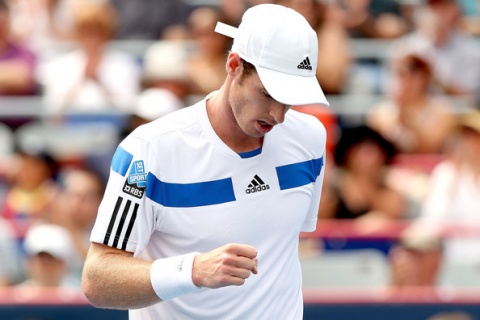