World No. 3 Novak Djokovic of Serbia defeated world No. 5 Alexander “Sascha” Zverev of Germany 6-2, 6-1 in one hour and 19 seconds to reach the final of the Shanghai Masters. The Serbian will now return to world No. 2, displacing Roger Federer when the rankings are released on Monday.

Zverev is tall, lanky, and loose with long strokes. He plays farther back behind the baseline, which worked well on the clay, when he beat Djokovic in their only previous meeting, the finals of Rome in 2017. But on the fast, hard courts of Shanghai, this tactic did not work for Zverev. Djokovic stayed close to the baseline, dictating play, taking time away from his opponent.

Zverev is just not as good as Djokovic, yet. Djokovic is a decade older, a former and likely future No. 1, but you suspect that sometime soon, Zverev, who’s already had great success at the Masters level, will break through at a major and have that transformational experience that will propel him to No. 1. This week the 21-year-old became the fifth man to qualify for the ATP Finals at the O2 in London. He joins Nadal, Federer, Djokovic, and del Potro. 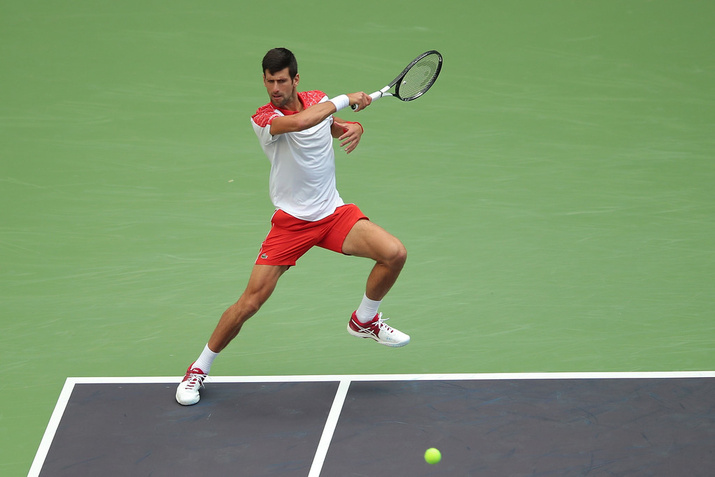 Djokovic, a three-time champion at this event, embraces the culture. The magnificent stadium is designed after Shanghai’s city flower, the magnolia. Earlier this week, Djokovic posted a video on Twitter where he was seen following the “ancient Chinese tradition of watering this powerful and wise tree for good luck with water from the old well.”

Djokovic got off to a good start in the match, winning the first two points and holding easily. Zverev also held easily, serving big. You felt that Zverev had to have a good serving day to have a chance. So far, so good. The score was one-all with Djokovic serving. Zverev hit two aggressive returns, and the score was love-thirty and Zverev looked primed for an early break. But Djokovic handled the depth and power of Zverev and came back to 30-all and held serve. Zverev continued to serve big—one was clocked at 142 mph—and held serve for 2-all. Djokovic still staying close to the baseline, changing directions easily, and finishing points at the net, held for 3-2. The next game was key, and Zverev got down quickly 15-40. Djokovic got the break, leading 4-2, then held for 5-2. Even though Zverev could still serve big, he was only serving at 47 percent with three double faults, and Djokovic had yet to miss a return. Djokovic broke to take the set. Zverev looked chagrined.

In the next set, Djokovic with his tremendous, squeaking court coverage broke Zverev’s rhythm with off-pace shots. When Djokovic was up 3-1, Zverev slammed down his racquet hard enough on the hard court that it bounced up and twirled two or three times in the air before crashing to the ground. He then stepped on it violently to smash it more, and for good measure, threw it to the crowd. Code violation Mr. Zverev. Zverev did win the next point for 15-all and the next for 15-30, and the crowd encouraged him, but Djokovic was too tough and ran away with the set. It was a scintillating performance from the Serb, and he joyfully did his signature celebration of throwing his heart in all directions of the crowd.