China has been a lucky country for Aryna Sabalenka.

On Sunday, she won her third WTA singles title of the year, all in China, defeating Kiki Bertens 6-4, 6-2 in one hour and 16 minutes at the Hengqin Life WTA Elite Trophy Zhuhai.

Bertens led 4-1 in their head-to-head rivalry, but this time Sabalenka dominated. Playing her ferocious, aggressive style, she delivered 17 winners and 14 unforced errors, while Bertens had 14 unforced errors and only 11 winners.

After losing the first set, a tired-looking Bertens tried going for more, coming to the net more, keeping the rallies short.

Sabalenka remained focused, playing her game, hardly noticing the crowd noise of a packed stadium, while Bertens was easily distracted by fans walking in the aisles, even once stopping play because of a crying baby. 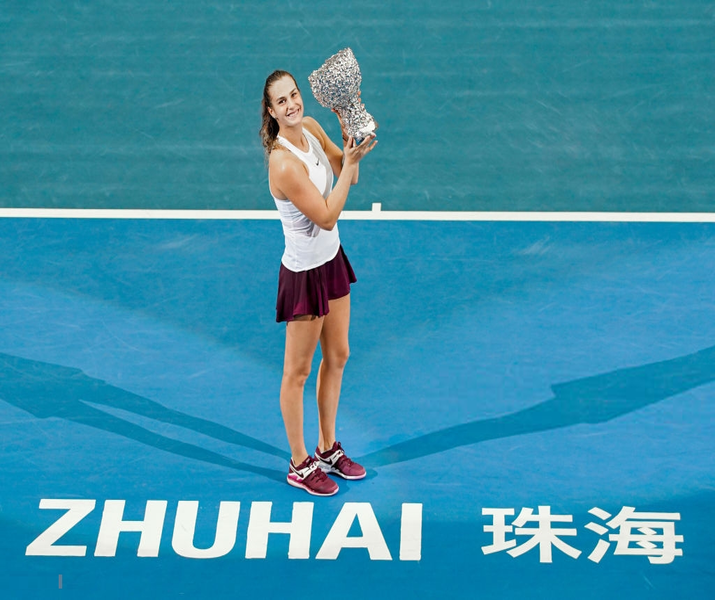 Serving at 5-2 in the second, Bertens was able to save three match points, and it looked as though she would hold serve one more time. But on the fourth match point, Sabalenka hit a massive forehand return, forcing the Dutchwoman to miss her backhand long, giving the joyous Belarusian the title.

In her post-match press conference, Bertens said she was not really that frustrated by the distractions: “I think every changeover we had to wait really long, so that’s kind of how it works here and you have to deal with that, so I don’t think that. I think she played very well there. She ended up winning and she deserved it.”

Bertens said that she’d had a great year. “Of course, with a win today it was maybe even better. But I gave everything this year, so I have no regrets, so I can only be proud of myself. Proud that I’m still in the Top-10 my second year in a row. So I think only positive things and of course there are always things we can work on and that’s what we’re going to do again, but first rest.”

In her post-match press conference, Sabalenka said: “I just stayed focused on each point and tried to keep this calm atmosphere inside of me.”

“I didn’t hear anything. I was just in each point and nothing could, I don’t know, like – I was just thinking about the every point and it’s helped me to play my best today and to compete.”

Sabalenka will now shift her focus to the Shiseido WTA Finals Shenzhen, where she and Elise Mertens are the top-seeded doubles team. The pair has already claimed doubles crowns at the US Open, Indian Wells, and the Miami Open.