In a night match on Court Philippe Chatrier, in the third round of the French Open, 22-year-old Stefanos Tsitsipas of Greece, the fifth seed, defeated American John Isner, the thirty-first seed, 5-7, 6-3, 7-6(3), 6-1 in two hours and 39 minutes.

Because of the pandemic, there is a curfew in Paris, so there were no fans. Just coaches, family, friends, those working the event. The atmosphere was that of a junior tournament.

A former world No. 1 junior, the 22-year-old rising Greek star is at a career-high of No. 5 in the ATP Tour rankings.

Through the luck of the draw, which has the Big 3 (Federer, Nadal, Djokovic) in the top half, Tsitsipas is now (with Thiem losing in the first round and clay being Medvedev’s least favorite surface), the favorite in the bottom half.

I first saw Tsitsipas on the practice courts at the 2018 US Open. Sinewy and six foot four with flowing hair and a casual ease, he looked like an arty actor in an independent film.

Now he looks like an Athenian warrior out of The Histories by Herodotus. He moves with intensity, there to win at all costs. 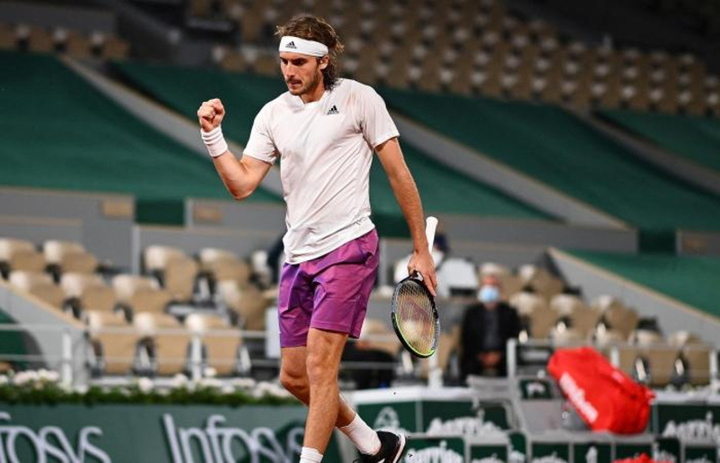 Isner is lanky, six-foot ten, and though thirty-six years old, still has a boyish face. He has the mannerisms of a Southern gentleman. At some point, I heard him say thank you when a ball kid gave him a ball. You don’t usually hear that or at least not with such sincerity.

Isner started out strong. He was in the zone with his serve. In the first set, he served seven aces and no double faults and won 91% of his first serves and 57% of his second serves. Tsitsipas, with his long strokes, could not get a read on it. Finally, he had to start guessing on the return and just blocking it back.

You could feel Isner had control, and they stayed on serve until, finally, Isner broke in the eleventh game and closed it out.

In the second set, Tsitsipas hung in there and was fortunate when a light mist became heavier and slowed Isner’s momentum.

Tsitsipas fired himself up, talking to himself. He hit an incredible inside-out forehand winner to hold for 4-3 after saving a break point after a double fault. He then broke Isner in the next game by chipping back returns and then dipping the ball with heavy spin at Isner’s shoelaces when Isner was at net.

After the set, Isner asked the umpire politely about closing the roof, saying that it was hard to see when he served. Tsitsipas ignored all of this. He clearly did not want the roof closed, understandably, as it would not favor his heavy topspin game.

In the fourth set, they stayed on serve, and it was no longer raining. The conditions were good, and Isner hit some amazing McEnroe-esque volleys. He also played well from the back, winning an 18-shot rally, the longest of the match.

In the tiebreaker, Tsitsipas hit another topspin-heavy dipping return at Isner’s feet after his serve and volley and got an early minibreak to win the buster.

From there, Tsitsipas winning seemed like a foregone conclusion. He was too intense, and his forehand, especially, had too much pace, too much topspin, and too much angle.

Next up for the Greek is the twelfth-seed, Spaniard Pablo Carreño Busta.