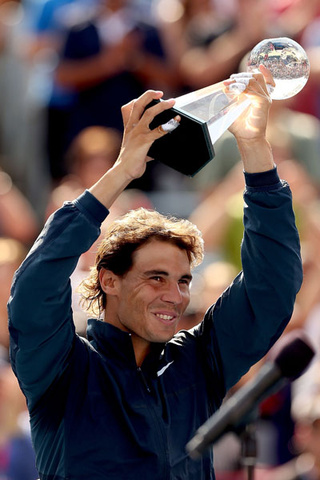 The best men’s tennis players in the world are heading to Toronto this summer to compete for the prestigious Rogers Cup presented by National Bank trophy! Taking place August 2-10, 2014 at Rexall Centre, Rogers Cup is an ATP World Tour Masters 1000 event and one of the world’s biggest tennis tournaments.

With the exceptions of Wimbledon and the US Open, Rogers Cup is the oldest tournament in tennis and the 2014 edition will continue to deliver awe-inspiring excitement, unforgettable moments, and history-making tennis to the city of Toronto. Beyond boasting a player field full of the world’s best and a world-class venue to take it all in, Rogers Cup offers many off-court attractions as well. Set on 20 scenic acres, the Rexall Centre grounds features world-class shopping, several delicious food and beverage offerings, interactive games and promotions, plus daily events such as autograph sessions and stage performances. With a focus on providing fans with the best experience possible, there is something for everyone at Rogers Cup.

For the first time, Rogers Cup will also be featuring a theme, Art of Tennis. Unique events connecting the creative side of tennis to the arts will be taking place throughout the week. Among the other special events set for the tournament include Pizzaville Free Community Weekend, Opening Night festivities, and Rogers Cup Hall of Fame inductions.

Combining the top tennis players on the globe with loads of off-court offerings make Rogers Cup a popular and exciting destination for sports and entertainment fans alike.