Reflections on the Current State of Nadal vs. Djokovic

As Novak Djokovic and Rafael Nadal roared to within a game of concluding their 41st meeting, Djokovic sniffed the blood and pounced in a single game that perhaps summed up the current chapter of the most prolific ATP rivalry in history. 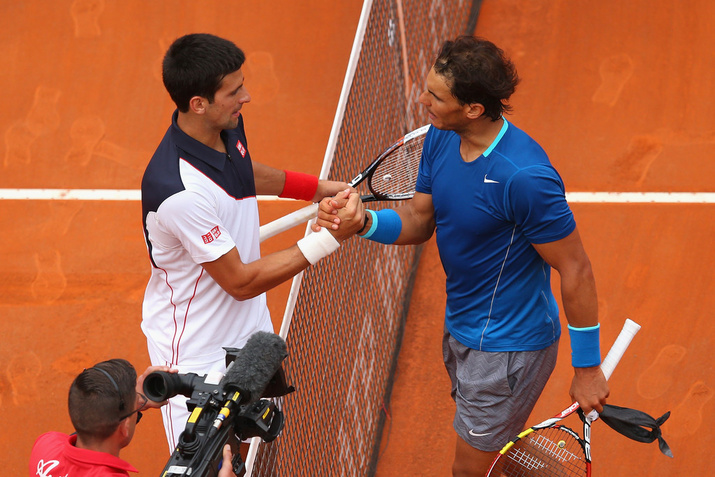 For an hour, he had appeared in a hurry to forego the usual endless lung- and leg-busting attritional warfare that has become a trademark of their battles. This time, proceedings moved swiftly, the second seed producing a master class in returning along the way. As the serves came spinning in, it began to appear that every Nadal delivery was at the mercy of Djokovic. When the Serb intended to shoot a laser-like return straight at the backhand, the ball invariably landed within an inch of the baseline, leaving Nadal with the sole option of a helpless scoop in reply. When Djokovic's mind was set on catching Nadal off-guard with a bullet return to his under-protected forehand side, the ball would perfectly skim the intersection between baseline and tramline.

A flawless exhibition in the art of the Return of Serve put the Serb a game from victory, but the winner was far from decided. Down 5-3 in the third set, Nadal served a perfectly competent delivery that would have been effective against most. Against Novak Djokovic, however, it was dispatched by his backhand for a clean return winner. A couple of points later, with Nadal down 15-30, it happened again:  a swift and destructive backhand that met at the intersection between baseline and tramline.

Two match points. Djokovic tried again, but this time he could only find his own frame. There still remained one match point, but he had a decision to make and he made it. The choice was between the two questions that will invade most tennis players' heads at sometime every match. To attack or not to attack, to take a risk or play safe. After much of the former throughout the match, it was safety first this time. With immaculate depth, Djokovic loaded the ball to Nadal's backhand and patiently waited for the error that eventually arrived.

In recent years, Djokovic has played a handful of immaculate matches against Nadal, hitting the red line and controlling proceedings with all of his typical effortlessness. However, there is something even more uniquely disarming about this relative comfort levels against Nadal in the final of Rome. After errors saw his early third-set break vanish, there was little reaction from the Serb at the awakening of the King of Clay. He simply sifted through his tactics and prioritized the type of consistency over power that forced the pressure onto Nadal's backhand, recalling all the relentlessness utilized by Nadal himself when exposing his own opponents' weaknesses.

While other players fear the wrath of Nadal's forehand, Djokovic is unperturbed. Throughout the battle, larger examples of the final few games were evident as clear, aggressive risks were taken. He practically whistled along while genuinely appearing to enjoy diving head-first into the mouth of the dragon as he pummelled the Nadal forehand time after time with precise, potent backhands. When that failed, it was back to plan B and the safety of Nadal's backhand. Absolutely no one should ever feel safe when a frowning Rafael Nadal is standing on the other side of the net and spoiling for a fight, but it's undeniable that Djokovic has come the closest yet.