From Red to Green: Last Week in Queen’s Club, Birmingham, and Halle

The 2013 grass season got underway with a handful of small tournaments in Germany and Great Britain.  Among those who started their Wimbledon preparation on a high note were the two men who reached the final there last year. 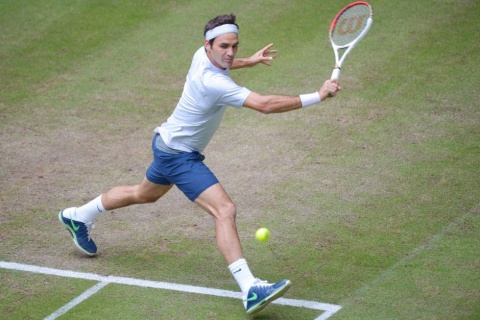 Wimbledon former champions:  Tested twice in his week at Halle, Roger Federer finally claimed his first title of the season.  He needed three sets in the semifinals to avenge a loss there last year to Tommy Haas, and he again lost the first set in the final against Mikhail Youzhny before claiming his 77th title.  Now tied with John McEnroe for third all-time in career titles, Federer also recorded his first double bagel this week since 2005.  More unexpected was the success of the last man who won Wimbledon before Federer first triumphed there a decade ago.  Battered but unbowed, Lleyton Hewitt revived memories of his Queen’s Club exploits by repeating a Wimbledon 2009 upset of Juan Martin Del Potro.  Hewitt has received brutal Wimbledon draws in the last two years, so he will hope for something kinder this time.

Queen’s Club former champions:  The last two men to win this posh little London event met in the 2013 final.  Top seed Andy Murray might have felt content to extract two or three wins from the week and a clean bill of health regarding his back injury.  Not satisfied with that result, Murray raised the hopes of his compatriots again by winning two matches in one day and defeating Jo-Wilfried Tsonga in a three-set semifinal.  The final unfolded much less eventfully than last year’s final at Queen’s Club, which ended with David Nalbandian’s infamous default.  Almost forgotten amid that hubbub, defending champion Marin Cilic survived some early struggles to upset Tomas Berdych and solve fellow former champion Lleyton Hewitt.  He could not stop Murray, though, who emulated Federer in rallying from losing the first set in each of his last two matches to capture the most prestigious British non-major.

Andrea Petkovic:  A few weeks ago, she contemplated retirement in frustration when she lost in the qualifying at Roland Garros.  Petkovic has sustained so many injuries over the last two years that hope had started to wane, so a wildcard into a home tournament offered a remedy at just the right time.  In a clay event at Nurnberg, the German regained some of her swagger by upsetting three seeded opponents, including Roland Garros quarterfinalist Jelena Jankovic.  As much as this fledgling tournament gained from Petkovic, Petkovic may have gained more from the tournament.

Simona Halep:  The first edition of Nurnberg fittingly featured a first-time WTA champion, as had the first edition of the Florianopolis event in February.  Halep had lost all three of her career finals before breaking through here, but she had reached a Premier Five semifinal in Rome last month as a qualifier.  One suspects that she will not need to qualify for many more of those events moving forward.

Mikhail Youzhny:  Like Petkovic, he toppled one seed after another in Halle, from Kei Nishikori and Philipp Kohlschreiber to Richard Gasquet.  In a duel of elegant one-handed backhands, the 30-year-old Youzhny dominated world No. 9 Gasquet for his first victory over a top-ten opponent since last year’s grass season.  He has threatened contenders as notable as Rafael Nadal at Wimbledon before.  Perhaps he could join Hewitt among the veteran dark horses to watch there.

Slovaks:  Not known for her fortitude in tight matches, Daniela Hantuchova showed some spine by winning three matches in Birmingham after she lost the first set.  Her singles prowess has declined sharply over the last year, but grass remains her finest surface with its emphasis on bold shot-making.  Hantuchova still can dazzle in that department, as her surge to the Birmingham title showed, and she became the second Slovakian to win there.  Echoing a 2009 title in Birmingham, Magdalena Rybarikova reached the semifinals this year.

WTA teens:  Spearheading the charge in Birmingham was Croatian phenom Donna Vekic, who reached her second final two weeks before her 17th birthday.  Among her most notable victims were top-eight seeds Urszula Radwanska and Sorana Cirstea.  A minor tournament with a large draw, like Birmingham, allows inexperienced talents an opportunity to collect some main-draw wins and build confidence at this level.  Two Americans joined Vekic in seizing this opportunity, the 18-year-old Madison Keys reeling off three victories and former Birmingham semifinalist Alison Riske duplicating that result as a qualifier.

Tall men:  While Hewitt’s grass expertise offered Del Potro an alibi for his loss, the efforts of Milos Raonic and Jerzy Janowicz in Halle resisted such easy explanation.  Janowicz faltered at the first hurdle against a lucky loser despite a game filled with offensive firepower that should shine on grass.  Unfortunate to draw a resurgent Gael Monfils in the first round, Raonic still should have found ways to win more than six games and more than 60 percent of his total service points on grass.

Eastbourne former champions:  Neither the second-seeded Ekaterina Makarova nor the fourth-seeded Tamira Paszek won a match in Birmingham.  Makarova ate a third-set bagel from the underpowered Marina Erakovic, while Paszek sank to 1-13 in 2013 by letting an early lead evaporate against Riske.  With an Eastbourne title to defend next week and Wimbledon quarterfinal points the following week, Paszek totters two early losses from plunging outside the top 100.

Umpire handshakes:  Despite its polished surroundings, Queen’s Club has witnessed some dubious incidents in recent years.  A match on an outer court between Xavier Malisse and Guillermo Garcia-Lopez descended into a nasty series of squabbles, embroiling umpire James Keothavong.   The brother of British player Anne Keothavong acted more like a player than an umpire in refusing to shake hands with Malisse after the match ended.  Players may spurn each other’s handshakes at times, but an umpire’s handshake should be an automatic gesture of sportsmanship.  Keothavong fully deserved the boos that he received.