Raonic and Young to Face Off in Citi Open Semifinal

WASHINGTON, DC. – A packed Friday at the Citi Open saw former junior Slam champion Donald Young and this year’s Wimbledon semifinalist Milos Raonic come out on the winning side of their respective matches. The two will meet in Saturday’s semifinal, pitting former junior standouts against each other. 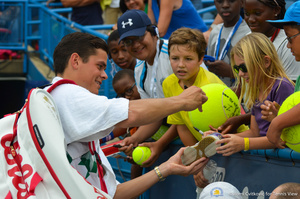 In the day's second match of the day, Raonic fired 16 aces on his way to defeating American Steve Johnson, 7-6(2), 6-2. Known for his hard-hitting game, he was quick to admit just how much he relies on his serve to get him through tight moments.

“I have a lot of belief in my serve,” stated Raonic afterward. “I know how hard it is to break me. … I believe that gives me an edge mentally as well as put pressure on my opponent. It can be demotivating for my opponent [when they cannot break].”

Personable, analytical and well-versed in his own statistics, the 23-year-old Canadian is quick on his feet when asked about his upcoming opponent, Donald Young who defeated Kevin Anderson earlier in the day in three sets.

“I was a year younger than [Young] and he was the guy you sort of looked up to that everybody was labeling the next big thing, and the next No. 1,” Raonic continued. “I’ve followed what he’s done, I followed it closely when I was young and I still continue to follow it. He had a great 2011, I think he got into the top 50 … He’s really talented and very dangerous. He knows how to play; he knows how to win. He’s been doing that since he was 10- or 12-years-old.”

Despite Young’s junior accomplishments, including winning two Slams, his professional career never really took hold as many had anticipated. However, he’s had some of his best results on the courts of DC and this week is no different as he reached his first semifinal in three years.

“Whenever you have good results at a tournament, you have fond memories and the fans are great. They really cheer for me and it helps out a lot. I like playing in the States and with people I know,” Young said in press.

With his Cinderella run at the Citi Open, the 25-year-old is projected to rise to inside the top 50 for the first time since June 2012, but he understands the patience that is needed week in and week out on the ATP World Tour, like with his first round exit in Atlanta last week.

“I was really disappointed with Atlanta. I felt like I was playing great, hitting the ball well, and I’ve been playing well this whole year,” Young continued. “But that was a bust and didn’t go well at all. I just feel like if I kept playing well and playing the way I want to play in the actual tournament, I could have a good result.”

ENTERTAINING TIDBIT: During his post-match press conference, Milos Raonic was asked about how he felt knowing that ESPN commentators Brad Gilbert and Darren Cahill were analyzing his perfectly-coiffed hair during his match. After a long pause and not entirely knowing how to answer the question, he was asked if it this discussion was “weird.” Naturally, he laughed commenting, “Which part? That’s a serious topic on ESPN?” A follow-up question then targeted his style: “Do you feel your hair is special?” With a playful twinkle in his eye, Raonic answered: “I try to make it special. Not just for myself but for the viewers as well.” (Full video: http://instagram.com/p/rLGmCxjE-4/)