Ahead of the Masters 1000 tournament in Montreal, most of the conversation swirled around whether Novak Djokovic or Andy Murray would assert himself as the leading contender for the US Open.  Also simmering was a subplot involving 2009 US Open champion Juan Martin Del Potro, who had recorded a semifinal at Wimbledon and a title in Washington.  But none of those men even reached the final at the Rogers Cup.  Instead, another former US Open champion delivered his own statement of intent by winning his second Masters 1000 hard-court crown of 2013. 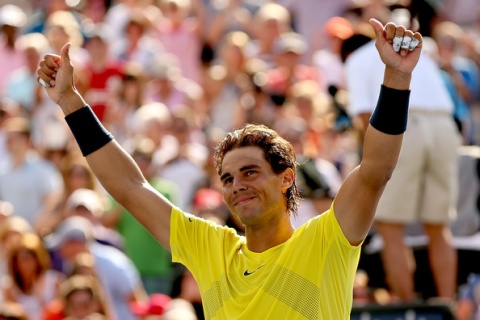 Perhaps Rafael Nadal’s title run in Montreal should not have come as a surprise.  The Spaniard had defeated three top-eight opponents on the hard courts of Indian Wells this spring, his best performance on that surface since 2010.  Still, Nadal entered his Rogers Cup semifinal against Novak Djokovic as a heavy underdog.  He had not defeated the Serb on a hard court in nearly three years, and he had lost eight of their ten previous meetings in North America.

At least for fans outside Canada, this semifinal marked the climax of the tournament.  For much of its convoluted sprawl, however, Djokovic and Nadal struggled to display their best tennis at the same time.  Not until midway through the second set did the Serb find his groove, struggling with double faults during the first half of the match.  When Djokovic awakened, the Spaniard retreated from his bold shot-making into a more passive lull that cost him the set.  With the match level at one set apiece, the quality of play climbed together with the drama.  Djokovic and Nadal have met 36 times, more than any other pair of men in ATP history, but rarely have they played an entire set without a single service break.  That was the case in the final set of their Rogers Cup semifinal, which featured two total break points in its twelve games.

At that stage, memories beckoned from their final in Miami two years ago.  After losing a tepid first set in that match, Djokovic had turned the tide in the second and eked out a tiebreak in the third.  This time, Nadal would flip the script on the man who has become his greatest rival.  Surrendering just two points in the decisive tiebreak, he summoned the courage to invade Djokovic’s hard-court territory and claim a slice of it for his own.  This unexpected outcome mirrored the Serb’s conquest of Monte Carlo this spring, long a clay citadel of Nadal.  Their meetings in 2013 have proved that either man can defeat the other on any surface, one of the reasons why their rivalry resonates with such passion and suspense. 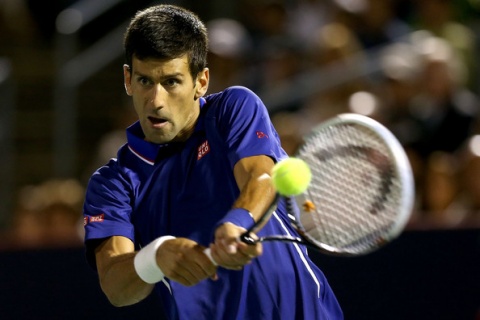 The burden now rests on Djokovic to do what Nadal did last year.  He has lost two excruciatingly close matches to his rival over the last few months, so the world No. 1 must find a way to reclaim his mastery over his best surface.  In a similar position, Nadal swept his three clay matches with Djokovic in 2012 after losing their two meetings on clay in 2011.  That resilience has not emerged from the Serb this summer, however, leading some to question the level of his intensity.  Djokovic struggled to survive the unheralded Denis Istomin in the third round of the Rogers Cup, echoing his indifferent form in North America this spring.  While he holds a stranglehold over the rankings, Andy Murray and Nadal have exuded more positive energy in recent months.

Not just in this landmark victory but throughout the week, Nadal echoed the aggressive brand of tennis with which he won the 2010 US Open.  He served with both purpose and pace while swinging freely on his two-handed backhands, redirecting both of his groundstrokes down the line, and forcing himself to play further inside the court.  Uncommon for a player carved from clay, that aggressive court positioning showed Nadal’s readiness to leave his comfort zone in pursuit of hard-court success.  He did not even tape his knees during his victory over Djokovic, a statement of confidence in his health that will make him ever more dangerous in New York.  Nobody would fault Nadal for contenting himself with exploits on clay and perhaps on some slow hard courts at this stage of his career.  Montreal showed that he remains too relentless a competitor to do that. 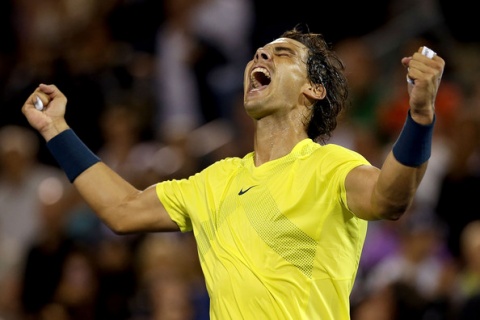 Not every notable event this week came as a surprise.  At the Rogers Cup women’s event in Toronto, world No. 1 Serena Williams marched to her eighth title of the year and her fourth without dropping a set.  As with Nadal, Serena’s greatest test came in the semifinals against world No. 4 Agnieszka Radwanska, the only top-10 opponent whom she would face.  The top seed could not find her best tennis for long stages of the first set but refused to let the crafty Pole slip away with it.  Having relied on her powerful serves and returns to carry her through the first-set tiebreak, Serena settled into a steadier rhythm in the second set.  There, a series of court-stretching rallies showcased the contrasting strengths of the two women.  After plenty of twists and turns, Serena remained undefeated against this rival by a margin as narrow as the 7-6 6-4 scoreline suggested.

In contrast, Serena romped through a 65-minute final to pass Monica Seles for fifth all-time in WTA titles.  Two more would lift her above Lindsay Davenport to trail only Martina Navratilova, Chris Evert, and Steffi Graf—the elite of the elite.  Of more immediate significance, Serena righted her ship after a disappointing early loss at Wimbledon to reaffirm her status as the US Open favorite. 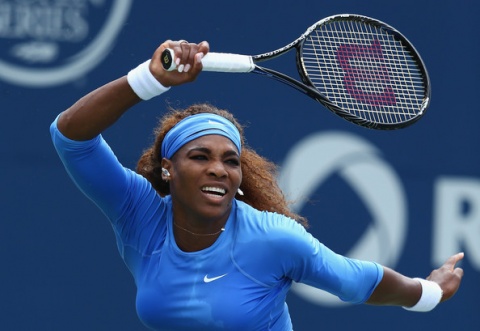 Plenty of players beyond the two Rogers Cup champions seized headlines at the Canadian events, including the top man from the home nation.  Although Milos Raonic could not solve Nadal, this week marked his debut in a Masters 1000 final.  That impressive step forward followed a series of upsets in the men’s draw.  Among the most stunning was world No. 3 David Ferrer’s loss to qualifier Alex Bogomolov, his fourth opening-round defeat of the season.  Ferrer yielded the top position among Spanish men to Nadal as a result.  Nikolay Davydenko leapt at the opportunity to reach his first Masters 1000 quarterfinal in three years, while Marinko Matosevic exploited Stanislas Wawrinka’s early loss to reach his first Masters 1000 quarterfinal ever.  Matosevic compensated for setbacks to fellow Australians Bernard Tomic and Samantha Stosur, a champion in Carlsbad but an early victim this week.

Raonic notched an upset of his own early in the draw when he defeated last week’s Washington champion and the trendy pick for the Montreal title.  Juan Martin Del Potro entered that match exhausted from a late-night epic in the previous round, while Raonic also had struggled in his opener.  A scratchy, contentious encounter ensued as neither man found his usual rhythm on serve.  Having raised eyebrows when he took a long medical timeout in the first set, Raonic caused more controversy when he failed to admit that he collided with the net late in the second set.  That decision cost Del Potro a point that should have belonged to him, and the Argentine never won another.

Not derailed by this dubious incident, Raonic halted the hopes of Ernests Gulbis after the latter upset Andy Murray.  Gulbis had struggled against Murray throughout his career, but he may have caught the Scot off guard in the aftermath of his Wimbledon triumph.  (Murray would gain some additional hard-court practice by reaching the doubles final.)  Those laurels also rested heavily on women’s champion Marion Bartoli, who retired in the third round.  Benefiting from her withdrawal was Washington women’s champion Magdalena Rybarikova, who reached her first Premier Five quarterfinal.  Stanford champion Dominika Cibulkova achieved the same result, leaving Slovakia one of only two nations with more than one quarterfinalist at the Rogers Cup. 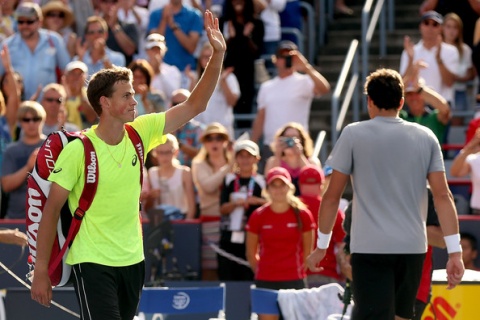 The other nation was Canada.  If few would have predicted that Raonic would hold the runner-up trophy, surely even fewer foresaw Vasek Pospisil edging within a tiebreak of the final.  The 23-year-old had reached his first career semifinal at his previous ATP tournament in Bogota, and he captured the title at a challenger in Vancouver.  Despite his boyish looks and winning smile, Pospisil harbors the resolve of a steely competitor.  Nine of his last ten ATP matches have reached a final set, of which he has won six.  Pospisil swept two tiebreaks from John Isner after trailing 4-2 in each of them, and he rallied from a second-set letdown against Tomas Berdych to win another third-set tiebreak.  That victory over a top-eight opponent infused Canadians with optimism for their Davis Cup semifinal this fall.  Pospisil’s magic in third-set tiebreaks deserted him against Raonic, but he did more than enough this week to put himself on the tennis map.  Not many men will want to draw him early in New York.

Only a little less surprising than Pospisil’s accomplishment was the winning streak compiled by Sorana Cirstea.  The Romanian profited from the coaching of Darren Cahill to reach her first Premier Five final, never having reached a quarterfinal at that level before.  Cirstea did it the hard way, defeating three top-10 opponents and former No. 1 Jelena Jankovic.  She saved double match point against Caroline Wozniacki and rallied from losing the first set to end Petra Kvitova’s title defense.  (Having lost eight matches this year after winning the first set, Kvitova faces serious questions about her fitness.)  A nervy Li Na failed to capitalize on Cirstea’s equally obvious nerves in the semifinal, double-faulting twice in a crucial tiebreak.  The Romanian now can hope to crack the WTA top 20 soon. 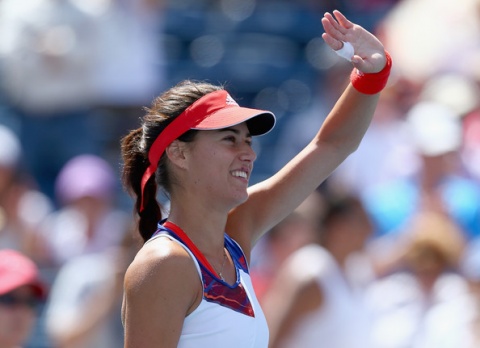 Meanwhile, Wimbledon semifinalist Jerzy Janowicz consolidated his status in the ATP top 20.  A countryman of Radwanska, Janowicz gave Poland cause to cheer from his gallant defeat against Nadal.  Janowicz edged to the brink of winning the first set in a tiebreak and claimed a lead early in the second set.  He could not finish what he started, as he could not at Wimbledon when he took an early lead against Murray.  Janowicz never had faced Nadal before, though, so this confident effort gave him a foundation on which to build.

The floor under the feet of Janko Tipsarevic continues to crumble.  While Janowicz has soared up the rankings, Tipsarevic has tumbled down them precipitously.  He reached a semifinal at the Rogers Cup last year in a strong summer as a member of the top 10.  Tipsarevic lost his first match in straight sets this year, dropping him from the top 20.  Denis Istomin inflicted the latest embarrassment in a span when the second-ranked Serb has lost in the opening round at 10 of his last 16 tournaments.

An embarrassment more comic than catastrophic befell Svetlana Kuznetsova in Toronto this week.  The two-time major champion reached quarterfinals at the first two majors in 2013 before an abdominal injury sidelined her.  The endearingly absent-minded “Sveta” forgot to enter the Rogers Cup field in time for the entry deadline.  Forced to play qualifying, she lost in three sets to Lauren Davis after winning the first.  Victoria Azarenka’s withdrawal then gave Kuznetsova a berth as a lucky loser.  All’s well that ends well, right?  Wrong.  Kuznetsova drew Davis again in the first round of the main draw, won the first set again, and lost again.

Fortunately for the Russian, she did not forget to enter the second Premier Five tournament of the US Open Series.  That event unfolds in Cincinnati next week jointly with an ATP Masters 1000 event.  Once it concludes, the landscape heading into the US Open will have grown even clearer than it has now.