The first round of the US Open Qualifying rounds ended yesterday, and the players who took the court yesterday will have to win all three of their matches over the next three days if they hope to earn a spot in the main draw of the final major of the year. Catch up on some of yesterday’s more noteworthy results:

A former US Open girls’ champion, Gavrilova took out fifteenth seed Nadiya Kichenok in two grueling sets on Court 6, one court away from the site of her big junior triumph. The Russian made a splash at the beginning of the year, upsetting now-top-60 player Eugenie Bouchard to qualify for the Australian Open main draw, where she made the second round. It has been a quiet summer for Gavrilova, but she looked on song when it counted against Kichenok, particularly off the backhand side. Having taken out the biggest seed in her section, the 5’5” Gavrilova will next take on the equally diminutive Serb Aleksandra Krunic in the second round. 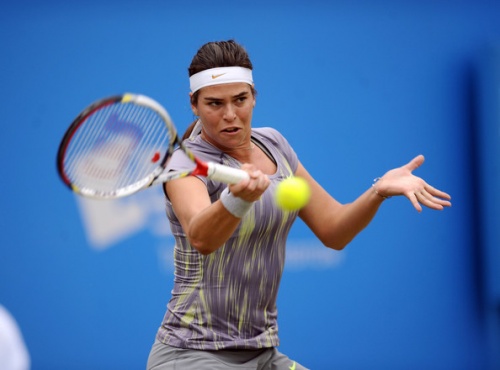 The 2013 season marks a return for Croatia’s Ajla Tomljanovic, who was forced to sit out most of last year with mononucleosis. Though she began the season lacking momentum, she made up for it with her enormous talent and exceptional build, beating Germans Julia Goerges and Andrea Petkovic en route to the round of 16 at the Premier Mandatory event in Miami. Standing at 5’11”, Tomljanovic hits cleanly off both sides, bringing up memories of a Lindsay Davenport as she took out Austria’s Melanie Klaffner in two sets. Admittedly, it was hard to get engaged in Tomljanovic’s match because the whole affair felt like a foregone conclusion. Much like compatriot Donna Vekic last year, Tomljanovic oozes “ready for primetime.”

In many ways, Rodionova represents everything that is both good and bad about the qualifying atmosphere. Never short on entertainment value, the Russian-born Australian has been known to give death glares to an inconsiderate gust of wind, and was in peak form against America’s Irina Falconi. Through much of the first set, Rodionova complained to umpire Marija Cicak that the net was suspiciously high enough to cause several untimely double faults, endlessly monologued to sister Arina in the stands, and seemed more than a little perturbed at a ballgirl thoughtless enough to collect a ball that the top 30 doubles player wanted to whack to the other side of the court.

All of this seemed like a harbinger of an epic meltdown, but Rodionova, wearing black knee socks (perhaps a homage to her nearly four-hour Charleston encounter with fashion maven Bethanie Mattek-Sands) found a vein of stellar form and ran away with the match from 4-4 in the first set. Rodionova will take on Mayo Hibi, the Japanese star who won the US Open National Playoffs earlier this week.