Q and A: Juan Carlos Ferrero

On Sunday, after his charge’s victory at the Miami Open, the coach of Carlos Alcaraz, former world No. 1 Juan Carlos Ferrero, spoke to reporters in the interview room.

Ferrero had made an emotional surprise appearance for the final after staying away in Spain to mourn the death of his father.

JUAN CARLOS FERRERO: Yes and no. His potential, I know since maybe two, three years ago, because I remember when he was practicing with some of the players that they were somewhat higher in the ranking than him, he was 16 or 17, and he could adapt his game to the level of the other players.

So, you know, it means that he has something and, you know, is going to keep working on that and keep working every day. So his potential was there, and I was only to let it flow and let it play and keep the things in a good path.

So it surprise me not at all, but of course it’s been very, you know, very fast and very quick. So not easy to do it. 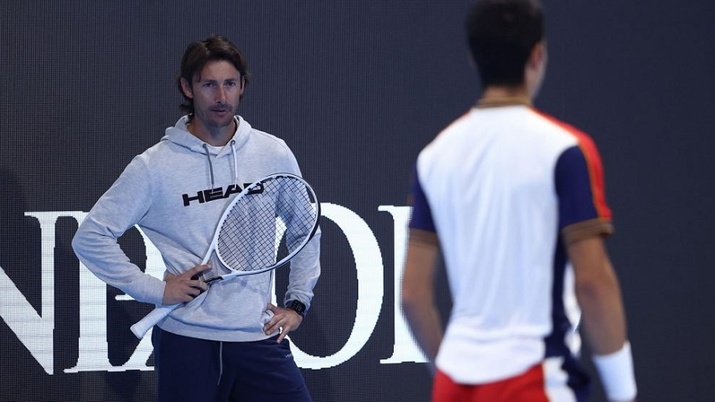 Q.  Can you share just any conversations that you had with him in terms of, you know, as young as you have coached him to where he is now in terms of his maturity and what you see in him, like if you don't mind sharing like what it’s like, and obviously the growth you see in him to play in a tournament like this and his success today?

Of course the level is there, and I think it’s going to happen many times. It’s only prepare a little bit his mind to adapt to all the circus it’s going to be.

Q.  Sorry about your father. Do you still think clay is his best surface?

JUAN CARLOS FERRERO: We are not sure (smiling). We talk sometimes about this, and he says to me that he’s not sure now, because we start practicing on hard courts like a year ago, so he didn't compete at all on hard court.

But, you know, his game, his kind of game to go forward many times, to go to the net and to play aggressive all the time, I was completely sure that his game could adapt to these kind of courts and even for grass.

So I think that when he's 100% trained, maybe he can give a little bit, a little bit more on clay. But let’s keep the door open that maybe he’s going to be better on hard courts in the future.

Q.  Just a follow-up about the clay, moving forward over the next six weeks, how do you, first, keep his focus after a win like this on getting towards Roland Garros and then how much do you think he will play?

JUAN CARLOS FERRERO: As I said, be normal, acting normal. Now we are going to go back, going to play some golf one day or two days, stay relaxed, and then go back to work.

I mean, it’s the way it has to be. Of course he just won a Masters 1000. It’s very important. But it’s part of his—means that he’s growing up like so fast.

So we don’t gonna do anything strange or different than we have been doing in the last few months.

Q.  You just said that you knew he was going to be great in like three or four years ago. Do you remember any specific matches or tournament where you felt that everything came together for him or something changed inside of him?

JUAN CARLOS FERRERO: No. Maybe the tournament in Rio like when he was 16 and he beat Ramos. You know, he show himself that he was a very good level.

But at the same time, he suffered a lot physically in that conditions, so he realize that he need to improve above the physical conditions.

So maybe the tournament open his eyes to believe himself that he can be there and practicing and keep going, but there is no specific match that I can tell you that that match just open his eyes to, it’s difficult.

Q.  Obviously now people are saying future World No. 1, all this kind of stuff. You know what it takes to get there. What’s the key thing he’s got to do to make sure his progress goes as planned? I know it’s very difficult to predict.

JUAN CARLOS FERRERO: Let him flow. I think the goals and our thoughts about what’s gonna be and what he can reach, now it’s very difficult to say. Let him play.

I think he’s able to do, you know, a great year, even let's cross fingers in Grand Slams it’s maybe next step, you know, to be part maybe at the end of the second week.

But of course he has to practice and he has to stay focused, because now I think it’s very easy to unfocus and, you know, people around is gonna, a lot of “Hellos,” you know.

So the team make a bubble and let, you know, him stay calm at home these days, and then, you know, go back, work normally, and then go to Monte-Carlo and try to give his best, as always, as there is no other way.