Ten months ago, Simona Halep’s name appeared in the qualifying draw at a Premier Five tournament in Rome.  Nobody gave it a second glance at the time.  Once considered a prodigy with a bright future, Halep had faded to the edge of relevance even on clay, her best surface.  A few heads turned when she upset Svetlana Kuznetsova and Agnieszka Radwanska to start the tournament, and a few more turned when she defeated former No. 1 Jelena Jankovic to reach the semifinals.  Still, nobody could have expected what came next.

Although she would fall early at Roland Garros, Halep would reel off 44 victories in her next 49 matches at non-majors that did not end in retirements.  That span included titles on every surface, seven in all, culminating with the Premier Five crown in Doha last month.  Halep remained vulnerable to the odd upset, dropping her opening match at two tournaments this year.  But her consistent excellence across multiple surfaces and continents earned her a career-high ranking of No. 7 entering Indian Wells. 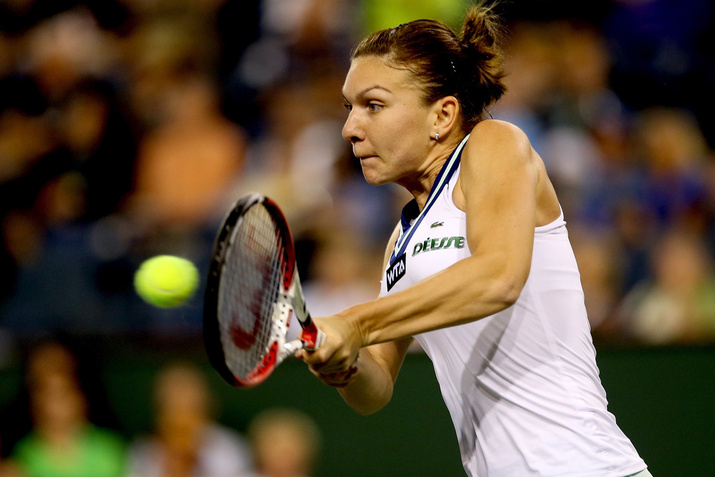 Granted, many of Halep’s victories had come at small tournaments that lacked elite fields.  She had not reached a major quarterfinal until the Australian Open two months ago, and she crumbled under the pressure of that opportunity.  Any lingering doubts about her ability to sustain success will vanish, however, if Halep continues to produce the sort of balanced, controlled aggression that carried her to an Indian Wells semifinal on Friday night.  Resilient in winning two three-setters this tournament, the plucky Romanian hoped to extend her recent success against world No. 3 Agnieszka Radwanska.

Although Radwanska had won their first three meetings comfortably, Halep turned the tide when she rallied from losing the first set to halt the Pole in Rome.  Still, clay is Halep’s best surface and Radwanska’s worst.  More impressive was her straight-sets victory en route to the Doha title in February, during which she constantly threatened Radwanska’s serve.

Despite her higher ranking, Radwanska in some ways had more to prove than Halep at this tournament.  She has entrenched herself as a regular member of the WTA top five, yet she has spurned some golden opportunities in the last several months.  A Wimbledon finalist in 2012, Radwanska reached the semifinals there last year in the company of Sabine Lisicki, Marion Bartoli, and Kirsten Flipkens.  She dropped a three-set epic to Lisicki as the title favorite.  Two majors later, Radwanska upset long-time nemesis Victoria Azarenka to reach an Australian Open final four without Serena Williams or Maria Sharapova.  Heavily favored over Dominika Cibulkova in the semifinals, she won just three games.

A series of other disappointing setbacks this year sent Radwanska into the desert with only one small title (Seoul) in the last 12 months.  And signs of frailty trickled into the desert for the world No. 3.  She narrowly escaped former Indian Wells champion Jelena Jankovic in a three-set quarterfinal, and she should have counted herself lucky to avoid dropping the first set to Alize Cornet a round before.

Like fellow No. 2 seed Novak Djokovic, then, Radwanska needed to deliver a strong statement ahead of a weekend when elite competition likely lies ahead.  Djokovic had achieved that goal by dominating Julien Benneteau, and Radwanska looked set to do the same when she reeled off the first four games with nearly impeccable tennis. 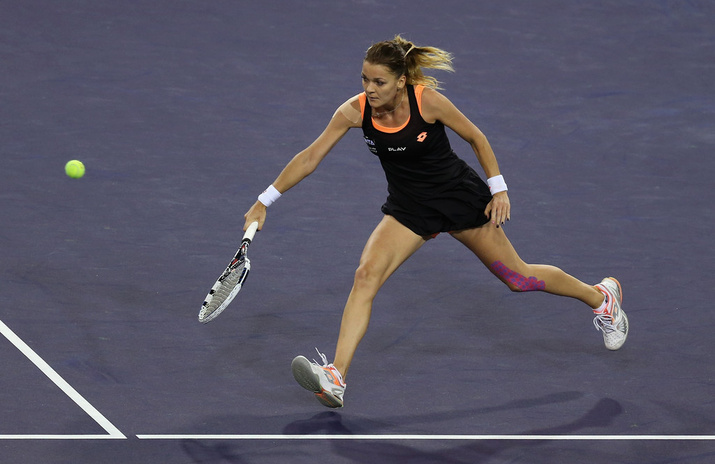 At first a step and a thought behind her more experienced opponent, Halep started by pressing the issue too early in rallies.  Once she settled into the match, she tightened her control and began to construct points more patiently.  After the dominant serves in the men’s quarterfinal that had preceded it, the all-court games displayed in this semifinal offered a refreshing counterpoint.  Halep and Radwanska redirected groundstrokes down sidelines with ease, absorbing each other’s pace.   They coasted into the forecourt when the opportunity arose, each mindful of taking time away from an opponent with seamless movement.  In a WTA where many players stay tethered behind the baseline, their willingness to move forward stood out.  At the same time, they could not win most points with one or two shots, so tactics and shot selection played as pivotal a role as did execution.

Unable to cruise behind her serve once she establishes a lead, Radwanska must work harder than many top-10 players to close out sets.  Halep threatened to erase what had once been a daunting deficit, but the Pole’s stingy defense gave her few openings to attack.  Once she won the first set, Radwanska stood with one foot in the final.  Not since last July had she lost a match from that position.

But Halep would not yield yet.  She battled the world No. 3 through a series of multiple-deuce games in rallies that probed every corner of the court’s geometry.  Leading by a break early in the second set, the Romanian threatened to turn the tide.  Here, Radwanska’s patient persistence served her well.  Weathering a flurry of bold winners from across the net, she focused on pinning Halep behind the baseline with groundstroke depth.  The Romanian soon surrendered her lead as she played too close to the lines, but it required the best in the Pole’s defense to outlast her.

When Radwanska broke again to lead 6-3, 4-3, her first trip to an Indian Wells final lay just over the horizon.  Surely sensing that reward, she pressed her advantage with some of her best serves in the match.  Halep battled to the bitter end, lashing fearless forehand winners to save match points before Radwanska served out the semifinal. 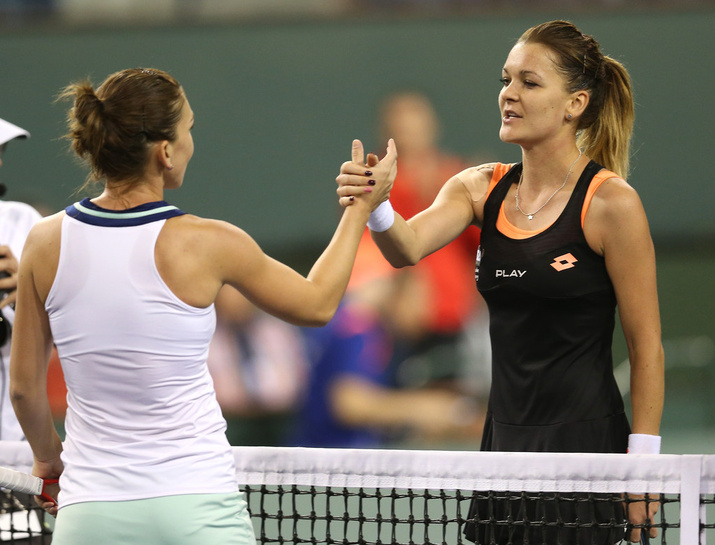 Avenging her loss to Halep last month, Pole reached the Indian Wells final for the first time and showed barely a tremor of nerves in the process.  But the scoreline did not reflect the quantity of entertaining exchanges in this semifinal, thoroughly appreciated by the Indian Wells fans.  The final on Sunday should feature much more of the same from Radwanska, whether she faces Li Na or Flavia Pennetta.

In an era when most top women make their living through explosive shot-making, the world No. 3 continues to carve out a fruitful career with cunning and court craft.  While she still searches for her first major title, Radwanska will have a chance to claim the tournament that many view as the “fifth major.”