On Championship Sunday at the Internazionali BNL d’Italia, world No. 7 Karolina Pliskova of the Czech Republic defeated world No. 42 Johanna Konta of Great Britain 6-3, 6-4 in one hour and 25 minutes.

It’s Pliskova’s biggest clay-court title of her career and her second title this year. She won in Brisbane in January. With her Italian Open win, she will be ranked No. 2 and will be the second seed at Roland Garros.

Konta, who has been ranked as high as four in the world, was playing in her second clay-court final and was bidding for her first title since winning the Miami Open in 2017. Her ranking will rise to No. 26.

Pliskova’s serve—she served five aces—and her forehand—she hit it down the line and pulled it crosscourt with disguise—were keys to her victory. She also volleyed extremely well, making ten out of ten that she attempted. She’s not known for her clay-court play, but she slides beautifully, staying on balance, and surely must be a top contender in Paris. 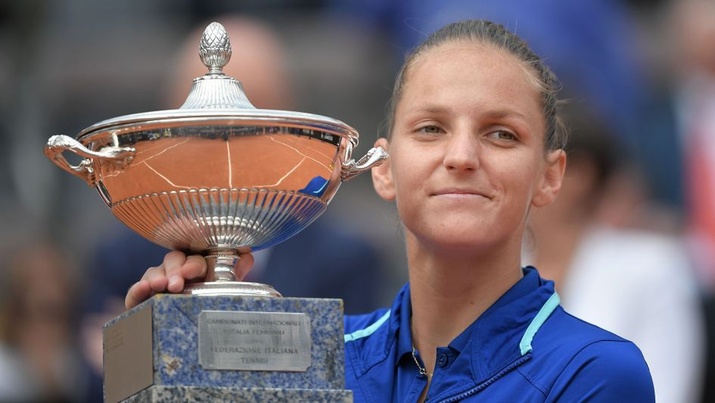 Konta played with confidence and aggression the entire tournament. It was a season-changing week for her, and she will be seeded at Roland Garros.

In her press conference afterward, Pliskova said, “I think I had tough matches. Also this one, two sets. I think it was tough. The conditions not perfect today.
“Yeah, still not feeling like I would be playing the best tennis. I think the best match was yesterday against Vika. I think it was a good level.

“But today I think I could do a little bit better at some points. But on the other hand I think with her it’s tough to play the best tennis because she has tricky game on clay. That’s why she went to the semis.

“But anyway, super happy because, like I said, I didn’t feel not even before the tournament, not even during, that I’m playing amazing. I’m in the final. Especially in this tournament, it means quite a lot to me because I never played well. Okay, we all know (smiling).

“On clay, I was just hoping for some matches, maybe couple, but not for this much. Yeah, really happy before Paris to go this week.”

In the men’s final, world No. 2 Rafael Nadal continued his inspired play this week and defeated world No. 1 Novak Djokovic 6-0, 4-6, 6-1. This is Nadal’s ninth title at the Italian Open.