Friday at the Porsche Tennis Grand Prix in Stuttgart, Kiki Bertens showed off exactly why she is ranked second on the WTA Insider’s Clay Court Power Rankings. The rankings are specific to past performances on any given surface Bertens is announcing herself as a contender for Roland Garros. She beat hometown favorite Angelique Kerber in a decisive 6-3, 6-4 victory in front of over 4000 Germans packed into the Porsche Arena. In fairness to the German, she has been battling a viral illness and went into the tournament not feeling her best and was generally proud of her accomplishments here, reaching the quarterfinal and starting to feel the clay better. Bertens thrived under the cheers for her opponent and beamed as she explained: “to be honest I quite like it. I think for me it’s better like when everyone is against me […] like how it was today rather than if everyone is clapping for me, then I feel a little bit more of the pressure. Today, I kind of liked it.” 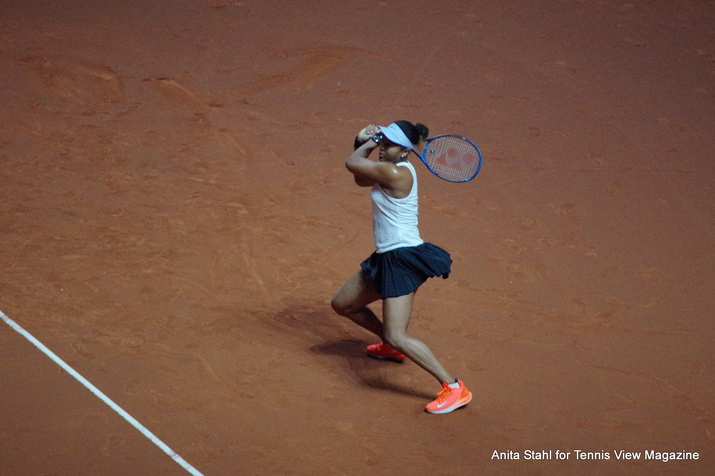 Naomi Osaka, ranked world No. 1 in total points but not making an appearance in the top 10 of the clay index, reached the semifinal with a 6-3, 4-6, 7-6(4) victory over Donna Vekic. After splitting sets, Osaka was broken twice in the decider. Down 5-1, she finally loosened up. Surrendering to the clay conditions she started to slide into her shots with a new ease. She broke back twice and held to a tie break. With a 6-3 lead in the breaker she held on her second match point. Speaking to press, she was proud of mounting a comeback within the match: “For me, it’s been a while since came back from being down. I think since Australia. I felt like it unlocked a part in me that is a bit rusty. I feel like I can sleep good at night today.”

Petra Kvitova battled past Anastasija Pavlyuchenkova 2-6, 6-2, 6-3. Exhausted when she arrived at the press conference, she sat down with a heavy but satisfied sigh. She had traveled to the tournament by herself, driving down from Prague in her own car without a coaching staff. Although she does have a local friend, flying solo at the tournament has meant warming up alone in the parking garage and dropping her own rackets off to be strung. While it may sound pitiful in plain terms, she is proud of the self-sufficiency: “Even if I do have my team here or am by myself, I’m just warming up by myself as well. They are just maybe putting some extra movements to it but as they’re seeing from the outside. But still, it’s me, especially on the court. For example, today I’m very proud of myself that I was able to turn it around even though Jiri didn’t come to the court and they are not sitting in the box and cheering for me. That’s what I’m taking back positive that I was still able to do it by myself.”

Finally, Anett Kontaveit advanced when Victoria Azarenka had to retire with a shoulder injury down 5-6, 7-5, 3-0. She received treatment during a medical time out but retired after she took to the court again and could not serve without apparent pain. They had played for over two hours already. Tennis View wishes Azarenka a speedy recovery.