On Centre Court at Wimbledon, in a comeback victory, Rafael Nadal survived an abdominal injury and the superb serving of Taylor Fritz in five thrilling sets, 3-6, 7-5, 3-6, 7-5, 7-6(4), to reach the semifinals.

In a match that lasted four hours and 21 minutes, Nadal and Fritz both won a total of 168 points. 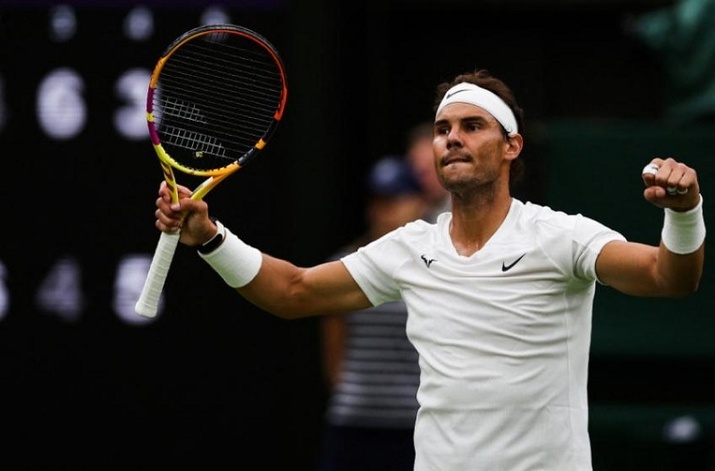 In his post-match press conference, Nadal said that it was an emotional and important victory.

He confirmed that his father and sister told him to retire when he was first injured. “They told me I need to retire the match, yeah.

“Well, I tried. For me was tough to retired in the middle of the match. Not easy even if I had that idea for such a long time.

“But in the other hand, I did it a couple of times in my tennis career. Is something that I hate to do it. So I just keep trying, and that’s it.”

“The physio just tried to relax a little bit the muscle there. But it’s difficult. Nothing can be fixed when you have a thing like this. That’s it.

“I don’t know. I wanted to finish. Doesn’t matter. Well, I prefer to win, with victory or defeat. That’s what I did. I fighted. Proud about the fighting spirit and the way that I managed to be competitive under that conditions.”

Because of the injury, the speed of Nadal’s serve slowed down 15-20 mph. Though he made up for his slower serve by hitting his signature curving, heavy topspin groundstrokes, while mixing in heavy slice. He also hit fantastic dropshots, drop volleys, and overheads. He often found his forehand after the serve, stepping inside out for the winner.

Nadal said: “I won because I played very good from the baseline. Of course, I didn’t win because of the serve. It’s obvious.

“I have to say that I think unfortunately, or fortunately, I was able to manage, to improve, and to adapt to the circumstances that my body presents to me to keep being competitive under any circumstances, no?

“I was able to improve my tennis depending on the needs. Something that I am happy with.”

“Certain parts of the match I felt like maybe I kind of just needed to come up with more, do more. I left a lot kind of up to him, and he delivered.

“It was a great match. Honestly, probably hurts more than any loss I’ve ever had.”

Fritz said of the difference in playing Nadal on hard or grass: “It’s a little easier for me to return serve on the hard court just because I can back up a little more, hit my forehand better. I definitely felt like my return today was pretty underwhelming, not great actually.”

Fritz said of Nadal’s slower serve: “I actually felt like I returned a lot worse when he slowed the serve down. I actually liked for the set and a half the way that he was serving when he was serving more at like 120 because I could take a shorter swing and use that pace to power back. Once he started serving it slower, I had to generate more, take a bigger swing on the return. So I actually felt like it made it tougher for me to return.”

Watching the match, it felt like Fritz was playing gutsy, aggressive tennis. But the American said that if he could play the match again, that he’d even be more aggressive. “I felt like I was being as aggressive as I felt comfortable with without making a ton of errors, like being able to make balls but maybe I needed to kick it up a gear and go for it even more, so…

“It’s easy to talk about that after I’ve lost.”

Fritz, who certainly had many fans in the crowd cheering for him, said of Nadal’s overwhelming support: “I mean, it would be nice to get some crowd support. I can’t be mad at it when it’s someone like Nadal. I mean, it’s Nadal. How can you question anybody for wanting to cheer for him?”