Most players have heard tennis commentators, professional players, coaches, and teaching pros repeat the phrase “come over the ball for topspin.”  That phrase to some extent has been replaced by the “windshield wiper forehand.”  Both are “myths” of tennis.  And if you are someone who has this in your tennis tool box as a “fact,” you are certainly a victim of this myth.  Time to clean out the tool box.

The following pictures will help clear up this myth.  Let’s use the best of the best for our pictures. Professional players for the most part should be studied rather than interviewed for their understanding of the game, especially stroke mechanics.  Just because a player excels at striking the ball does not mean they know how that strike took place.  When learning how to hit a tennis ball, you are much better off listening to the Vic Bradens, Steve Smiths (Great Base Initiative) and Dr. Howard Brodys (Ph. D., Professor Emeritus of Physics, University of Pennsylvania, and Member of USTA Sport Science and Technical Committee) of the world rather than the players we envy who make shots we can only dream about.  Granted, Rafael Nadal could beat Vic, Steve, and Howard 6-0 6-0 with a frying pan, but when taking a lesson you want the “teacher,” and the incredible wealth of information they bring to the game is second to none.

Let’s start with the all-time greats Roger Federer, Rafael Nadal, and Serena Williams.  The following sequence of pictures was taken just prior to the contact point and just after the contact point.

In the first round of pictures, notice that the racket is facing forwards before the ball is struck. This is the start of the hitting zone. The hitting zone is that length of time where the racket is straight up and down (vertical), and the strings are pointing forwards towards the target.  Consistently, the pros who have the best timing have the longest hitting zone, which allows them a greater margin for error than the club player, who generally has a smaller hitting zone, nowhere near the timing, and much greater frustration.  Anyone can learn to swing like the pros with the proper instruction and dedication.  You might not be able to generate their racket head speed, but the shape of the swing, which is more vital than the speed of the swing, is not exclusive to the pros. 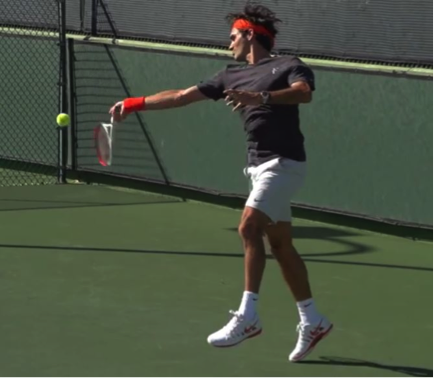 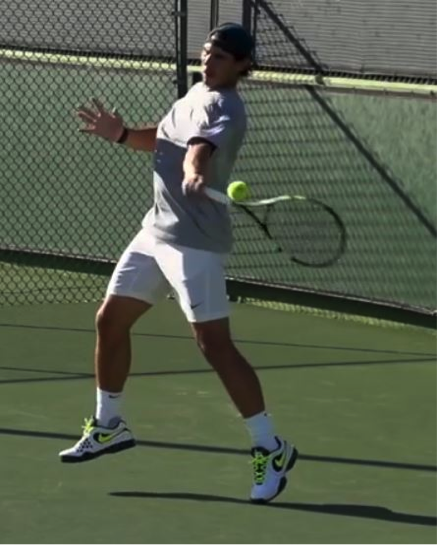 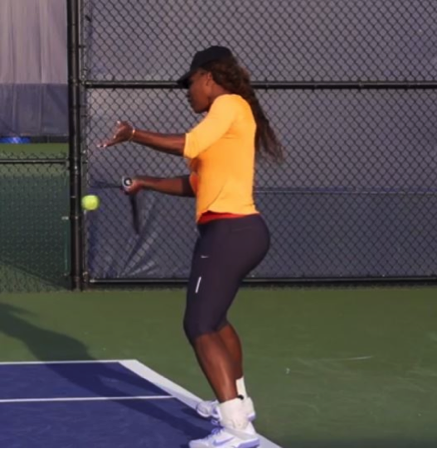 This is the moment of truth:  the contact point.  In this round of pictures, the strings are still pointing forwards, and the racket is behind the ball, not over the top of it.  The only moving part in the swing at this point is the shoulder.  The wrist, forearm, and elbow are fixed in the swing and will remain so until after the racket has passed through the hitting zone. 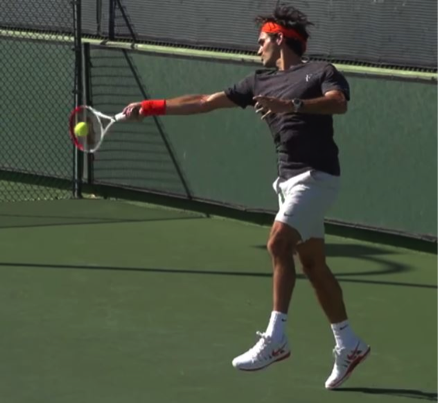 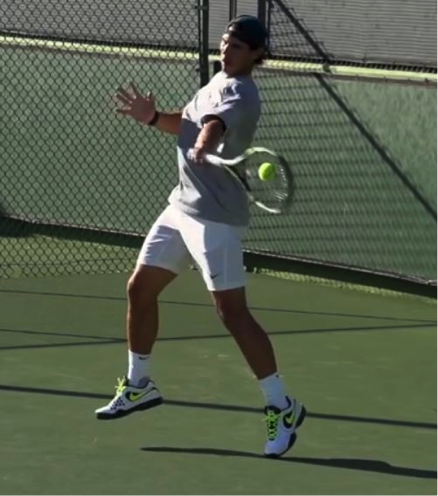 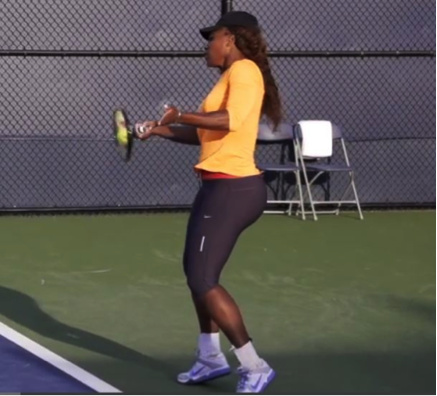 The third picture tells the story.  This is the “Myth Buster” picture.  The ball has been struck and is about a foot in front of the racket.  The ball is on its way back to the other side of the court, and the strings are still pointing forwards, not coming over the ball. 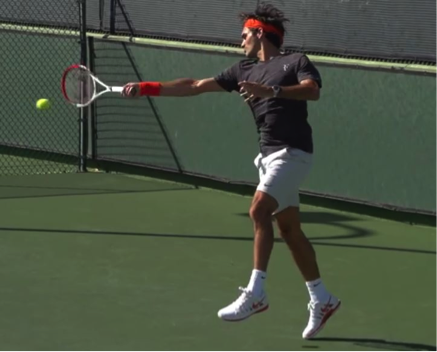 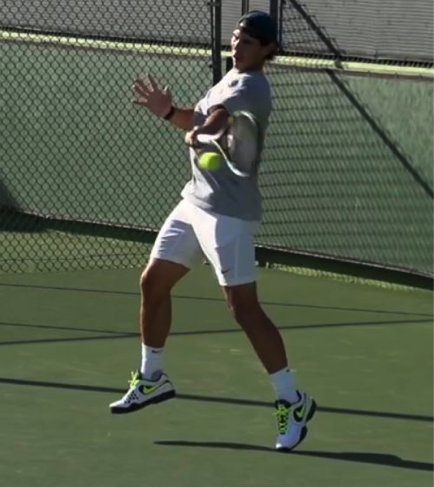 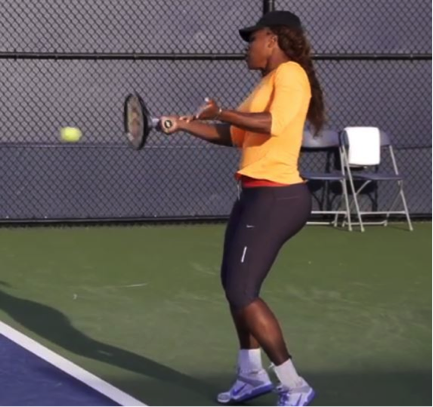 Notice that from player to player, male or female, when the racket is a foot before contacting the ball and a foot after contacting the ball, they all look identical.  The ball doesn’t know if you’re a guy or a girl, Roger Federer or Serena Williams.   It doesn’t know if you are hitting a forehand, or a one- or-two handed backhand.   So if this applies to the forehand side, the laws of physics dictate that it must apply to the backhand side as well, as the following pictures prove. 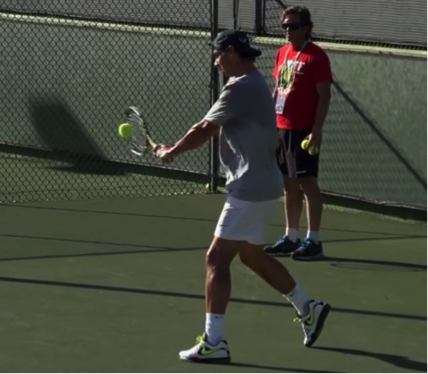 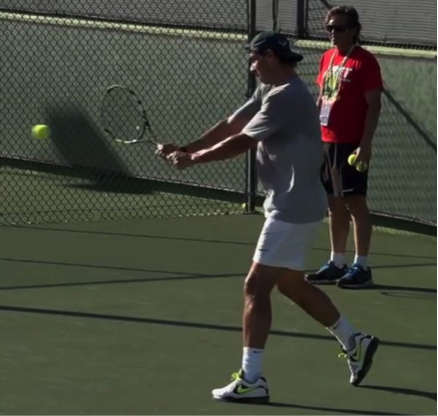 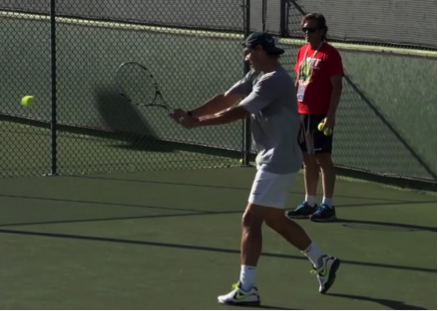 It has always been of interest to me that rarely if ever do you hear a coach tell a player to come over the ball on the backhand groundstroke.  When it comes to the swing, the ball only knows a few things:  the speed of the racket, the racket path, and the angle of the racket face, not whether it is a forehand or backhand. 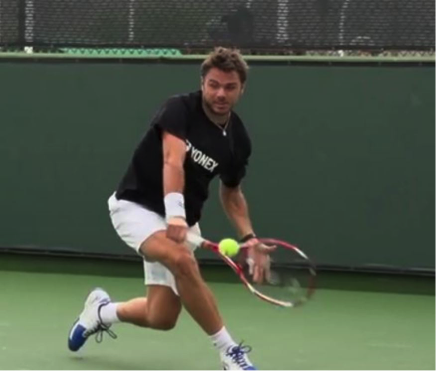 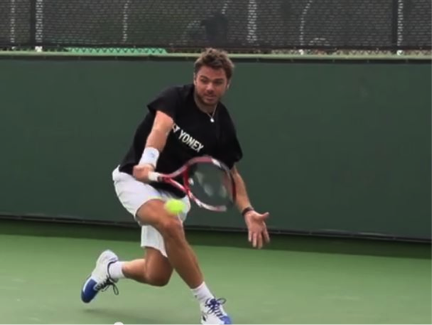 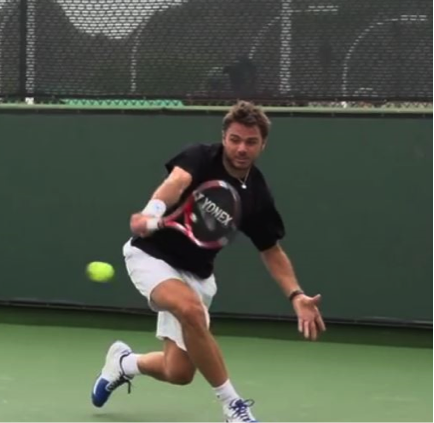 Last but not least, let’s understand where the “come over the ball” myth originated.  For years, coaches and instructors only had their eyes to tell them what the racket was doing, but this is no longer the case.  Since the eye only sees about 26 frames per second in relationship to a camera, a person’s eye cannot record what is happening to the racket as it passes through the hitting zone.  That event takes place far too quickly for the eye to record.  What the eye can see is the racket slowing down after the ball has been contacted, and that is when the racket starts its turn in the swing. This makes it appear that the racket rolled over the ball, but in reality it did not.  With high speed film and apps like Coaches Eye (video training tool), the guessing game can stop and let the facts prevail. 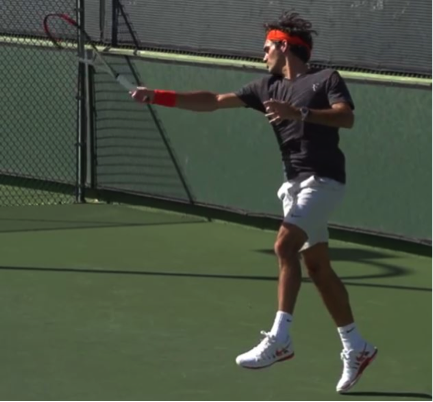 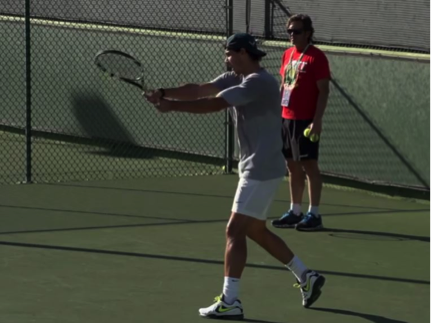 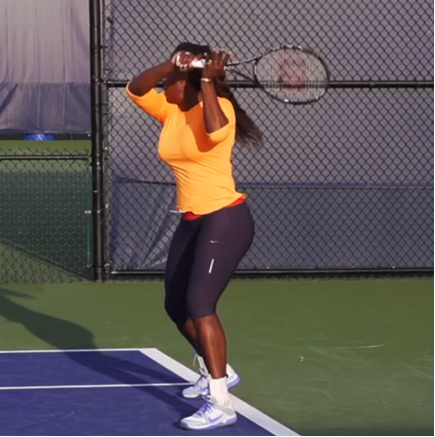 Take a look at the above pictures.  This is the fourth picture in the sequence, and it is not until this point that the racket turns.  Notice the ball is no longer in the frame when the “coming over” takes place.  The ball is long gone.  The only thing they are coming over is air.  I would still not recommend letting the forearm turn as Federer and Nadal do above. Leave this to the pros.  The timing it takes to let the racket turn this close to the contact point without it affecting the ball is very difficult, and it adds no value to the swing.  When it’s time to release the elbow in the swing, just finish on edge over your shoulder like Serena.  Granted, she does not finish like this all the time, but what happens after the ball is hit (follow through) is much less important to the ball than what happens before (backswing) and during the hit.

Look for more “myths” of tennis in the near future to help you clean out your tennis tool box.  For any questions, don’t hesitate to contact me at the below email address.

Jim Klein is the founder of the Jim Klein Tennis College established in 1995 at the Doylestown Tennis Club in Doylestown, Pa.  Jim attended Tyler Junior College (1984 – 1986), the first college to offer a degree in the Science of Teaching Tennis.  He is a Vic Braden trained pro.  Jim credits Steve Smith and Vic Braden for his core base of tennis knowledge. To contact Jim:  physicsof10is@gmail.com.