Miami Report Card: Who is Head of Class, Made the Grade or Failed

With the second ATP Masters 1000 and WTA Premier Mandatory tournament of 2013 behind us, here is a report card for some of those who we believe stood out amid the mayhem in Miami.  Grades hinge on not just what round a player reached, but whom they defeated in doing so, the expectations on them heading into the tournament, and how they actually played.

Serena Williams:  After various physical woes hampered her early in 2013, she delivered yet another reminder of how untouchable she can be when healthy.  En route to a record sixth Miami title, Serena defeated all of her rivals in the top five except the absent Victoria Azarenka.  She hit more winners in her semifinal against Agnieszka Radwanska than the latter won points, and her wins over Li Na and Maria Sharapova displayed how dangerous she becomes in adversity.  The first strikes dazzled as much as ever, but what may have impressed even more was her ability to outmaneuver opponents in longer exchanges on this slow court, which showcased her natural athleticism.  Although the clay season usually frustrates her, the momentum of this triumph could fuse with her desire to atone for last year’s Roland Garros first-round loss into a lethal combination.  Valedictorian

Andy Murray:  Once Roger Federer and Rafael Nadal withdrew, and Novak Djokovic lost in the fourth round, Murray became the heavy favorite to win his second Miami title.  As he often does, he made the challenge more difficult than it might have appeared by spotting his last two opponents early leads and even saving a match point in the final.  Also as he often does, Murray eventually exploited the opportunity by improving to 14-1 in finals since the start of 2008 against players other than his three main rivals.  The title lifted him past Federer to the No. 2 ranking, although he remains well behind Djokovic for the top spot.  That status seems appropriate for a man who has reached three straight major finals and now claimed one of the Tour’s most prestigious non-majors.   A+

Tommy Haas:  Spurred by the presence of his infant daughter, Valentina, this charismatic veteran soared to the semifinals just a week before his 35th birthday.  The most memorable match in his run came against world No. 1 and defending champion Novak Djokovic, a straight-sets demolition under the lights in which Haas hit virtually every shot in his artistic game to perfection from slices to drop volleys to lobs.  In an era when the men’s game has gravitated so much toward physicality and power, his bursts of creativity opened a window onto another way that tennis can be played, even on one of the slower surfaces that have grown increasingly ubiquitous.  A+

Maria Sharapova:  We learned nothing new about Sharapova from her first five matches in Miami.  Just as she did at Indian Wells, she took care of business uneventfully without losing a set, even on days when she could not quite find her best form.  While one might jump to the conclusion that we learned nothing new from the final either, her eleventh straight loss to Serena felt different from most of the previous ten.  Sharapova showed far more confidence and tactical coherence than before against this opponent, winning a set from her on a hard court for the first time in 2005.  Even in defeat, she took an encouraging step forward.  Raised a rung for being the only player to reach the semifinals at both Indian Wells and  Miami.  A 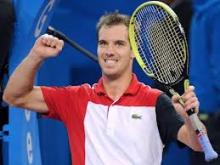 Richard Gasquet:  He has compiled perhaps the most consistent span of his career since the American hard courts last summer.   Despite an ankle injury at Indian Wells, Gasquet showed his improved resilience of recent months by edging out Nicolas Almagro in a thrilling three-setter, perhaps the best men’s match of the tournament.  He also avenged his Indian Wells loss to Tomas Berdych with the type of sustained, balanced effort that he rarely produced early in his career.  While he could not produce another against Murray, in part because of his injury, the blazing backhands that he struck at over 100 mph in that match justified the price of admission alone.  A

Kirsten Flipkens:  The last month has gone a long way towards proving the Belgian’s second-week appearance at the Australian Open more than an accident.  Having won a set from Azarenka in the fourth round of Indian Wells, Flipkens toppled Petra Kvitova en route to the Miami quarterfinals and again won a set from a top-four opponent, this time Radwanska.  She cuts her margins too fine on too many groundstrokes to produce consistent results, but her frequent trips to the net and varied arsenal of shots create a pleasant contrast to much of the WTA.  A

Nadia Petrova / Katarina Srebotnik:  Miami marked the first time in Petrova’s long career that she had defended a title in either singles or doubles.  Having reached the Indian Wells final with her veteran partner from Slovenia, she collected the big trophy this time for a near “doubles double.”  A

David Ferrer:  Stepping into Nadal’s shoes, his fellow Spaniard edged closer than Rafa ever has to snagging his nation’s first men’s title at this tournament.  On that fateful match point, however, his decision to stop play for a challenge suggested the lack of belief on these stages that has hampered him against the Big Four.  After Sunday’s gruesome train wreck (95 combined unforced errors), Ferrer now has lost all twelve of his finals against Djokovic, Federer, Murray, and Nadal.  Before that stage, he showed his trademark grit by outlasting Tommy Haas, the hottest player of the tournament, after he trailed by a set and later by a break in the third.  Ferrer’s finals appearance here sets him up auspiciously for his favorite part of the season:  the European clay.  A-

Agnieszka Radwanska:  A notch or two below her best form for most of this season, she seemed fortunate to reach the semifinals at the site of her most important title to date.   Radwanska dropped set after set to unheralded opponents and needed too long to find her rhythm in each new match.  Those slow starts cost her dearly against Serena, who handed Radwanska her seventh loss of the last thirteen months in which she has won three of fewer games.  Raised a rung for producing the shot of the year so far with a blind, behind-the-back volley stab that curled across the net at an implausible angle.  Check out the replay on the WTA website or Youtube if you haven’t already.  A-

Italian women:  Colliding with Sharapova repeatedly in recent months, Sara Errani still brought a renewed sense of belief to a matchup that never has ended well for her.  She nipped doggedly at the Russian’s heels for two and a half hours as she continued a consistent string of February-March results.   Equally impressive was Roberta Vinci, who also reached the quarterfinals  after three consecutive comebacks from losing the first set.  Who says that Italians win only on clay?  A- 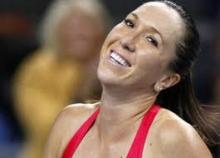 Jelena Jankovic:  Her tournament reminded many of the fortnight compiled at Indian Wells by another Slam-less former No. 1, Caroline Wozniacki.  While Jankovic lost a round earlier than did Wozniacki in the desert, she also benefited from Victoria Azarenka’s withdrawal in her section and found herself mercilessly exposed by Sharapova.  A bizarre set of scheduling decisions contributed to her listless effort in that semifinal, combined with the grueling three-setter that she played against Roberta Vinci the night before.  Jankovic has earned arguably her best results on clay, so this result combined with her recent title in Bogota may set her up to play spoiler over the next two months.  B+

Li Na:  One of six quarterfinalists 30 or older in the two singles draws, she bounced back remarkably from a knee injury that had sidelined her since the Australian Open.  Li fended off the fierce challenge of rising star Garbine Muguruzua and came within a point of winning a set from Serena, positioning herself for a strong run on the clay where she often thrives..  On the other hand, she could not capitalize on her opportunities against the world No. 1, continuing to show her curious blend of steeliness and frailty.  B+

Jurgen Melzer:   An extremely surprising quarterfinalist, like Flipkens, he produced a similar result when he got there by taking the first set from world No. 5 Ferrer before fading sharply midway through the second.  Also like Flipkens, his all-court game combined with volatile ebbs and flows to pique the interest of those accustomed to conventional baseliners.  Having won the Dallas challenger the previous week, Melzer showed how much winning at any level can build confidence for the highest level.  But he did not score any notable upsets en route to the quarterfinals, benefiting from Juan Martin Del Potro’s early exit, and he labored through unsightly three-setters that produced the ridiculous as often as the sublime.  B

Marin Cilic:  On the verge of the top 10, the Croat scored a quiet upset over Jo-Wilfried Tsonga as he improved to 8-1 in tiebreaks this year.  Then Murray squelched any thought of a momentum-building run by ousting him in straight sets just as quietly.  B

Gilles Simon:  Considering how poorly Janko Tipsarevic had played since the Australian Open, Simon’s upset of the world No. 9 in three dull sets seemed only a small surprise.  Haas outgunned him decisively in the quarterfinals, where fatigue from the Tipsarevic match may have hampered him.  B-

Tomas Berdych:  Similar to Radwanska, he wobbled through his early rounds and then offered little resistance to the first opponent of a quality comparable to his.  Berdych said after his meek loss to Gasquet that playing so many matches in February and March had left him exhausted, and a glimpse at his schedule shows what he means.  At least he fared better than most Indian Wells semifinalists here, outside Sharapova.   C+

Novak Djokovic:  Whereas he had atoned for an Indian Wells semifinal defeat last year by winning Miami, the world No. 1 followed a similar loss in the desert this year with a catastrophe here.  As well as Haas played in his emphatic victory, Djokovic played what he called his worst match in years as he sprayed 30 unforced errors with just seven winners.  An apparent abdominal strain may have troubled him, but his Australian Open triumph seems like a long time ago already.  C-

Sam Querrey:  The top-ranked American man won just two games from Berdych in the most lopsided loss of his career.  With Davis Cup against a Djokovic-led Serbian team next weekend, he needs to scrub Miami from his mind immediately.  F