“Playing in front of my home crowd definitely gave me extra motivation today,” said 18-year-old Coco Gauff, who is from nearby Delray Beach and has many friends and family supporting her here at the Miami Open.

The talented American star defeated 33-year-old Zhang Shuai of China 7-6(1), 7-5 in one hour and 49 minutes to reach the fourth round.

It was a tough straight-set victory for Gauff, who served well, winning 73% of first serve points and blasting five aces. The American displayed great mental strength, along with her exquisite backhand and movement, to fight her way through an impressive opponent.

Shuai won the US Open in doubles last year, and earlier this year, she won the singles title in Lyon. 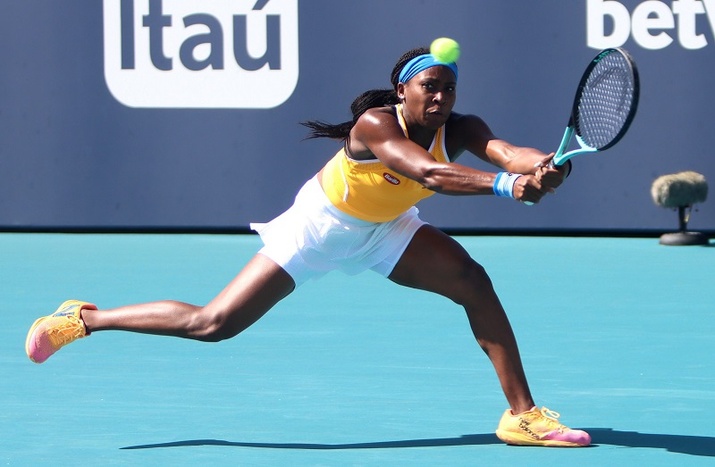 Gauff said: “Yeah, definitely am glad I’m able to get this far in this tournament. Obviously eager to continue to do better.

“I’m glad that—I think I was down a set point or something in the first, so I kind of just ripped a return. I’m glad I’m trusting my instincts more.”

Gauff will next play Iga Swiatek of Poland, who will officially be world No. 1—now that Ashleigh Barty has retired—when the tournament ends and the rankings are updated on April 4.

“Yeah, I played her [Swiatek] in Rome last year in the semis and she won. She won that match. Hopefully this time it’s a different result for me.

“But, yeah, honestly I have no pressure going in. She’s the No. 1 player in the world. She’s on a, I guess, a hot streak right now. Or win streak? Win streak, hot streak, is that a thing?

“Hopefully I’m just going to go out there and play free if I do end up playing her.”

Though Swiatek is the hottest player on tour—the new world No. 1, winning Indian Wells, the first half of the Sunshine Double—Gauff will certainly have a chance. She is playing with confidence and composure.

Gauff said: “I feel like when you practice hard, you know that you’re prepared for the pressure situations, so I feel like I have been practicing really hard. I’m comfortable and confident in my game.”