Two former juniors and future of the tour, 19-year-old American Amanda Anisimova and 20-year-old Canadian Bianca Andreescu, battled Sunday night at the Miami Open with the Canadian coming out on top 7-6(4), 6-7(2), 6-4.

This is the first time the two had met on the WTA Tour. The last time they played, in 2015 at the prestigious Eddie Herr junior tournament, Anisimova won.

In the first set, Anisimova served first and held at love. Andreescu had a tougher opening service game, with Anisimova crushing a backhand down the line and hitting a ferocious forehand return, but she managed to hold with a forehand volley winner, showing her excellent feel at the net.

At 1-all, Anisimova got down 30-40, but saved break point with a forehand crosscourt winner. She held with two good serves, a positive start for Anisimova.

At 1-2, Anisimova gets unlucky with a net cord return that goes wide. Andreescu holds at love.

Andreescu, serving, hits a deft dropshot for 3-all. 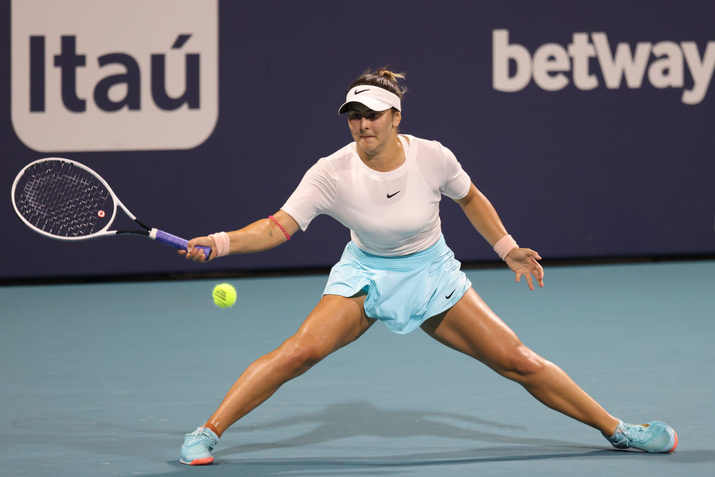 Anisimova holds for 4-3 with a good serve down the T and forehand errors from Andreescu.

At this stage, Anisimova is focused, serving well, and outhitting Andreescu.

Then at 3-4, 30-all, Andreescu serves beautifully out wide and yells “Come on!” It was an important point. At 40-30, she hits another impressive serve under pressure to get a big hold for 4-all.

Finally, on the seventh deuce, Anisimova steps into the court and crushes a backhand crosscourt on the rise with her exquisite timing. She holds for 5-4.

It’s 5-all, Anisimova serving. She gets down 15-40, but holds with a backhand cross winner and

Andreescu, at 5-6, holds at fifteen with Anisimova missing a backhand return wide. 6-all.

In the tiebreaker, the first four points go against the server. At 2-all, Andreescu improvises with a slice forehand, and Anisimova nets a backhand. Andreescu leads 4-2. Anisimova hits a backhand winner down the line off a short second serve for 3-4.

At 6-4, Andreescu has a set point and hits a delicate dropshot and forehand volley into the open court, using her great creative variety.

In the second set, Andreescu, serving first, holds with an ace down the T.

Anisimova gets down love-40. She saves one break point with a forehand cross, but then double faults. It’s the first break of serve.

Andreescu has had eleven break points. Anisimova hasn’t had one yet.

Leading 2-love, having all the momentum, Andreescu double faults and Anisimova pierces a backhand up the line. Anisimova breaks and is back in the match. She holds for 2-all, with an incredible short angle on a forehand cross.

Andreescu holds with a good serve down the T and a hard backhand to the middle of the court, taking the lead 3-2. She yells “Come on!”

Anisimova begins the next game with an ace and holds at love. She then calls the trainer because she has a blister.

It’s 3-all, and Andreescu is serving. She gets broken at 15, missing a forehand dropshot.

The trainer comes out to put tape on Anismova’s hand. The tape does not seem to help her. Anisimova is broken at love. It’s 4-all. Andreescu holds with a forehand down-the-line winner.

Then there is another medical timeout. Anisimova now has two fingers taped. She’s serving at 4-5. She gets two free points from good serves and hits a fierce forehand in the corner to hold.

At 5-all, Andreescu is serving and gets another lucky let cord off a backhand that barely drops over. Andreescu throws up both hands in apology. She holds.

Then Andreescu calls a medical timeout for a back injury. She leaves the court for treatment.

At 5-6, Anisimova is serving. She hits another perfectly timed on-the-rise, down-the-line backhand. She holds for 6-all with two more beauty backhands: one cross, one down the line. Another tiebreak!

Anisimova, though, is able to go up 5-1, with a swinging forehand volley cross and forehand down-the-line winner. At 2-6, Andreescu is serving, and off a second serve, Anisimova hits a hard, deep backhand and Andreescu nets it. Anisimova wins 7-2 in the breaker.

Serving first in the third set, Anisimova gets down love-40, but manages to come back, taking the game with a perfect backhand down the line.

Andreescu holds with a serve down the T. She calls for the trainer again, citing the problem with her back. Andreescu looks like she’s moving gingerly. Anisimova holds for 2-1.

The trainer comes on for Andreescu. Afterward, she holds at love. Then she gets an early break, leading 3-2.

Anisimova seems to have lost concentration.

Anisimova, though, gains focus and holds with a big serve, big backhand combo.

Andreescu, serving at 4-3, gets another lucky net cord, then hits a great serve down the T. At 40-15, Andreescu plays a perfect point with a backhand down the line and a forehand swinging volley.

At 3-5, Anisimova holds with an ace down the T and scintillating down-the-line forehand.

At 5-4, serving for the match, Andreescu hits a terrific serve up the T and a backhand (her signature one where she gets so low) down-the-line winner.

In a quick turnaround, Andreescu will next face Garbiñe Muguruza on Monday night for a place in the quarterfinals.

“I’m going to do my best with treatment, best with food, best with sleep, all that stuff,” Andreescu said. “I have been here before. I have played tough matches like this. Had to play the next day.

“So I kind of know what to expect. I have to be on my A game tomorrow because I know Muguruza is very tough to play.”