Manic For A Moment: Fourth-Round Headlines at Wimbledon

Six players reached their first career quarterfinals at Wimbledon after a Monday highlighted by one enormous upset and dominance performances from most of the other favorites. 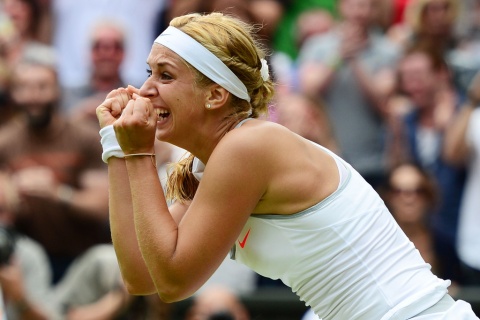 Sabine Lisicki:  Behold this woman at Wimbledon, and tremble.  The list of Lisicki’s victims on these lawns includes six major champions and three world No. 1s after she toppled defending champion Serena Williams in three sets.  The German with the huge serve and flashy smile has reached quarterfinals in four straight Wimbledon appearances, dethroning the reigning Roland Garros champion each time.  Lisicki pounced on a tepid Serena to claim the first set and regrouped from a disastrous second set and a 0-3 deficit in the third to sweep six of the last seven games.  As one would expect, delivering the final blow did not come easily.  Her serve, which delivered ten aces today, and her fearless aggression finally carried her past the presumptive title favorite in a long final game.

Top two men’s seeds:  One massive upset often triggers another, but world No. 1 Novak Djokovic and world No. 2 Andy Murray dispelled the clouds of uncertainty that hovered over Centre Court after Serena’s exit.  Both men won in straight sets, moving within two victories each of the final that everyone has anticipated since the second round.  Djokovic especially impressed with a commanding effort against Tommy Haas, who had won their two previous clashes on grass.  Although he needed a tiebreak to win the third set, Djokovic asserted his authority at the outset and never gave the underdog real hope.  Murray also played one tiebreak against Mikhail Youzhny but never looked seriously threatened.

Sloane Stephens:  Only one player continues to fly the Stars and Stripes in the quarterfinals after a generally disappointing tournament for Americans.  Stephens has needed to survive third sets in each of her last two matches, rallying from a set down on Monday against Monica Puig.  The Australian Open semifinal that seemed like a fluke in January now looks like the start of something real, for she has won no fewer than 12 matches at majors in 2013.  Gifted comfortable draws at the previous two, Stephens has defeated some quality opponents at Wimbledon and held her nerve in key moments.

Spanish men:  On his worst surface, Fernando Verdasco has reached the quarterfinals at a major and done so with ease.  Dropping just one set through the first four rounds, Verdasco has reinvigorated his career at the most unlikely juncture.  He has stayed disciplined in dispatching inferior competition, like Kenny De Schepper today, and stifling flammable dark horses, like Ernests Gulbis last week.  Up next for Verdasco is a date with Murray, whom he has defeated at a major before.  With all of the pressure on his opponent, he can swing freely. 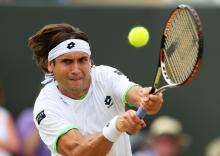 Not one of David Ferrer’s four victories here has come easily, but the top-ranked Spaniard has thwarted one upset bid after another.  He lost the first set for the second straight match and nearly fell behind Ivan Dodig two sets to love, only to dominate proceedings once he escaped that threat.  Ferrer eyes a fourth straight major semifinal, although he never has reached that stage at Wimbledon.

Poland:  Mostly known for producing Agnieszka Radwanska, this nation has not ranked among the leading tennis power.  It has sent more players to the quarterfinals at this Wimbledon than any other nation, however, and can count on at least one semifinalist.  The unseeded veteran Lukas Kubot and the swiftly rising Jerzy Janowicz reached their first major quarterfinals with symmetrical five-set victories.  When they meet each other on Wednesday, two countrymen will share a court in a Wimbledon quarterfinal for the first time since 2000.

Meanwhile, Radwanska also needed a final set to survive Manic Monday as she regrouped from early adversity against Tsvetana Pironkova.  The only woman to reach the quarterfinals at every major this year, she never may get a better chance to win a major title with all of the top three women already gone.  But Radwanska will need to overcome a 1-7 record in major quarterfinals against the woman who defeated her in that round at the Australian Open. 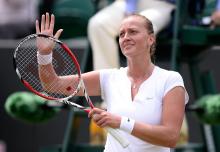 One-time major champions:  The second highest-ranked woman left after Radwanska, Li Na will seek her first Wimbledon semifinal and a top-four ranking when they meet on Tuesday.  Two shaky performances in the first week gave way to a dominant victory over Roberta Vinci, who will rank in the top ten after the tournament.  Also improving from first-week struggles was Petra Kvitova, the only former Wimbledon champion to reach the women’s quarterfinals.  Kvitova flirted with disaster for much of the first set against Carla Suarez Navarro before settling down in the second.

Djokovic and Murray may have reached the quarterfinals without losing a set, but a much less likely candidate has achieved that feat as well.  Juan Martin Del Potro had recorded quarterfinal appearances at every major but Wimbledon before this year.  Overcoming a knee injury, Del Potro dominated Andreas Seppi to set up a chance at revenge against Ferrer, who defeated him at Wimbledon in 2012.

Tomas Berdych:  The 2010 runner-up survived a dangerous tilt with Bernard Tomic to arrange an encore of his Wimbledon meeting with Djokovic that year.  That match should intrigue in view of Berdych’s recent impressive form, although the Serb defeated him relatively comfortably in an Australian Open quarterfinal.  Able to secure most of the key points against Tomic, Berdych gradually consolidated his control over their encounter after the two towering men split the first two sets in tiebreaks. 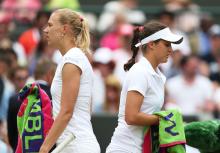 Kaia Kanepi:  Great Britain had dreamed of two Wimbledon quarterfinalists from the home nation, but Kaia Kanepi had other ideas.  The woman who rallied from the brink of defeat against world No. 7 Angelique Kerber followed that upset by bouncing Laura Robson in two tight sets.  In her second Wimbledon quarterfinal, Kanepi will look to halt Lisicki’s momentum with explosive shot-making designed for grass success.

Marion Bartoli:  The world No. 15 has not lost a set en route to the quarterfinals, by far her best result of the year.  Bartoli’s path will grow more challenging in the next round against Stephens, the first opponent inside the top 50 whom she has faced.

Opponents of Italians:  Better known for expertise on clay, Italy sent more players into the second week than any other.  Once there, though, none of them won a set.  Flavia Pennetta came closer than any of them by twice serving for the first set against 20th seed Kirsten Flipkens, but the favorite used her variety to outmaneuver the veteran.