Twenty-one-year-old American Sofia Kenin was born in Moscow, but soon after, her family immigrated to the United States. She now lives and trains in Florida.

She is 5’ 7” with wide blue eyes and dark blonde hair she wears in a ponytail held in place by a low visor. Before a match, when she’s at the net waiting for the coin toss, she jumps, takes shadow swings.

Her greatest strengths are her intensity, focus, and self-belief.

She is an aggressive baseliner with exquisite timing.

She is a fighter, she wants to win. 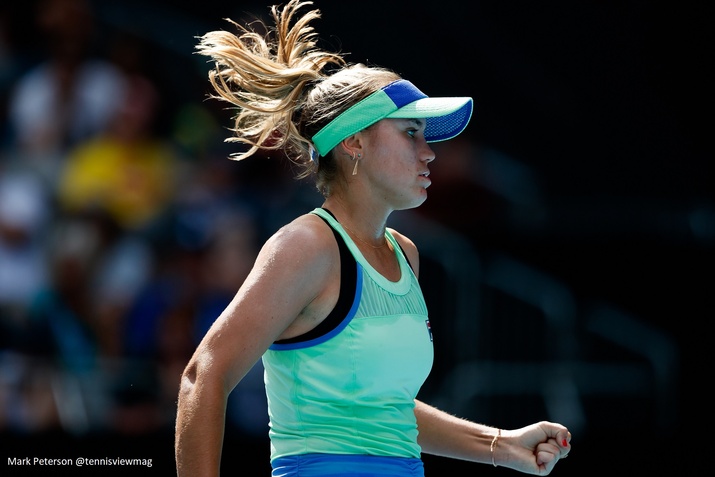 She has a weapon in her backhand with a takeback to her ear that is Wawrinka-esque, but two-handed, which she can hit crosscourt at acute angles and down the line, always staying on balance.

She is smart on the court and has good feel with one of the best delicate, well-disguised dropshots in the game.

She is currently ranked world No. 15, but after her victory in the Australian Open final on Saturday against two-time slam champion Garbiñe Muguruza, she will move into the top ten for the first time.

In late October, I had the chance to interview Kenin in China at the WTA Elite Trophy Zhuhai for Tennis View Magazine.

Tennis View Magazine: As a junior, like Bianca Andreescu, you won the Orange Bowl. She just won the US Open. Do you think a slam win is possible for you? Is the US Open the one you’d like to win most?

Sofia Kenin: For sure. I’m fine with any Grand Slam (smiling).

Preferably the US Open, of course.

Of course, I believe it’s possible.

Bianca obviously proved it, and there’s so many other great players who want it. I believe I can do it.

I just feel at the beginning of the Grand Slams is toughest, and then once you get into the fourth, quarterfinals, you know anything can happen.

So if I can get there and see what happens after that (laughing).

SK: That was a good win at the French. It was helpful. I was actually supposed to play Bianca in the second round. Unfortunately, she had to retire. She didn’t even go on court. So not the way [I’d like to win], but I guess I’ll take it anyway.

TVM: How is it with your dad as your coach?

SK: It’s really great. We’ve made it work. He helps me. He knows me better than anyone else.

Obviously, I’m stubborn, and I’m not going to admit sometimes when he says stuff that I should improve. He knows me better, and we’ve obviously done really well together. And we’re not going to change anything.

We have a connection. My dad put everything for me to be where I am. He sacrificed a lot.

TVM: And Rick Macci [the Boca Raton-based coach] discovered you?

SK: Yes, I trained there. Not too long. He helped me with technique and my strokes.

TVM: Do you like the traveling and the press that comes with the tour?

SK: Of course, I miss home, but traveling I love. I get to see new places and experience new things. So obviously it’s really nice, and a lot of people would give anything to be where I am just through travel. I’m just very grateful to be able to do this.

And I love doing press. It’s nice. I get to show my character and just be easygoing with them. When they ask nice questions (smiling).