Indian Wells: Murray Powers Through To Third Round

In a highly anticipated match on Stadium 2, the second biggest showplace at the Indian Wells Tennis Garden, wildcard and former world No. 1 Andy Murray, age 34, of Great Britain, defeated world No. 38 Carlos Alcaraz, age 18, of Spain, by a scoreline of 5-7, 6-3, 6-2 in three hours and three minutes.

Alcaraz, who has a fluid game with power and feel, is thought by many to be a future world No. 1. The Spaniard is making his debut at the tournament. He’s at a career-high ranking and is the youngest player in the Top 100 ATP Rankings.

Murray is making his 13th Indian Wells appearance, and this is the first time since 2016 that he’s reached the third round.

The match was thrilling to watch, with many long spectacular rallies and lots of variety in shotmaking. 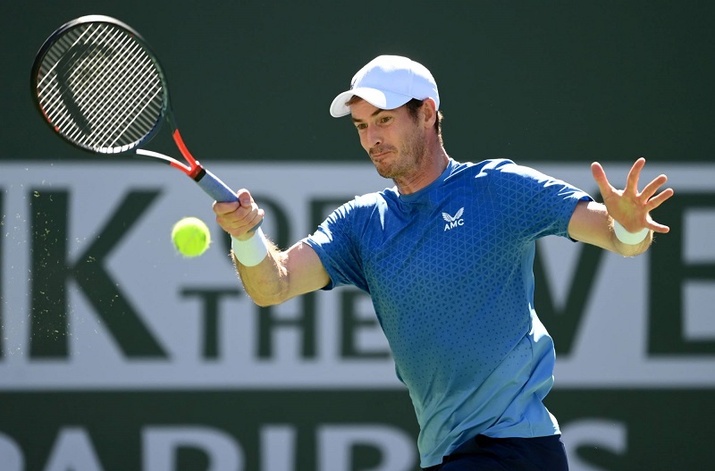 There were also the usual Murray antics, yelling at himself, yelling at his box. At one point, Murray was distracted by a walkie-talkie from security, which was indeed loud, and t

The umpire requested it to please be turned down.

And there was even a new antic that turned out to be a brilliant ploy.

Since Alcaraz was standing so far back to receive serve, Murray hit an underarm serve for an ace.

In his post-match press conference, Murray explained: “No, I mean, I’ve never done it on the tour before. The courts are so slow. Look, since Wimbledon, obviously made some improvements to my serve and was getting lots of free points, serving a lot of aces in the matches I played recently. And, yeah, obviously played for three hours today. I served three aces in a long match, one of them being the underarm serve.

“If you look where he was standing at the beginning of the match to return the first serve in comparison to he changed that at the end of the first set. He started returning from further back, so it was even harder to get free points on the serve.

“I thought if he’s going to stand that far back and I’m getting no love from the court and the conditions, why not try it and see if I can bring him forward a little bit again. Wasn’t expecting obviously to get an ace out of it.

“Yeah, he was so far back, he didn’t obviously react. Wasn’t expecting it. Yeah, I was thinking about using it at times in the third set, but obviously up in the score, was doing a little bit better, didn’t feel like I needed to.

“Yeah, certainly when guys are standing there to return serve now, it’s a smart play.”

Murray said his win was very encouraging. “Yeah, I mean, obviously I’m happy. It was kind of like at the US Open, like my body did well today. Like I said, it was hard conditions. It was very hot. Because of the nature of the court here, you’re going to play some long rallies, especially against a player like him.

“Yeah, at times I played some really good tennis. It wasn’t my best match. I can certainly still do things better. I thought I competed well today, which was probably the most pleasing part for me.”

Next up for Murray is world No. 4 Alexander Zverev of Germany.

Murray said: “Yeah, looking towards the next match, obviously Zverev is a top player. He’s had a good summer post Wimbledon with the Olympics, then a great run in New York. Played a tough match with Novak there. Yeah, not going to be easy for me. I played some good matches against him in the past. Yeah, will need to play really well.”

Murray does have a winning record against Zverev.

Murray said: “I mean, obviously the match that we played last year, not saying he was playing his best tennis at that stage, but he did make the final of the US Open a couple of weeks later. I wasn’t physically feeling particularly good and did not play particularly well, but managed to win. From that perspective, like, I can gain confidence from that, that if I play a really good match I’ll be right in there with a shot.

“He’ll certainly go in as the overwhelming favorite. But if I play a high-level match, I’ll be right in there.”