How a Lower Ball Toss Can Help Your Serve

Let's take Maria Sharapova's serve.  No junior player should dream of serving like Sharapova.  There are many great things to admire about Sharapova’s game.  Her never give up attitude would be at the top of the list. Few in the history of tennis, male or female, have her sheer determination to continue the fight regardless of the score.  She has the grit of the great Jimmy Connors.

On the other hand, there are many flaws in Sharapova's serve, but let’s focus on the toss.  Sharapova's toss on average is four feet higher than the highest point she can reach with her outstretched racket.  The challenge for her is that the ball is accelerating on the way down to her contact point, due to the effects of gravity.  The ball will pass through the window (contact point) of her outstretched racket moving at nearly 11 mph. 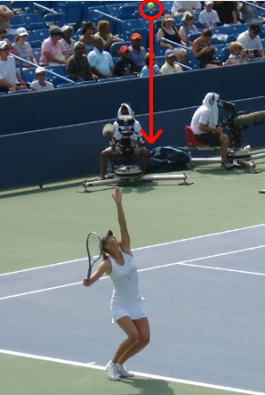 This is where the “toss higher for more time” myth comes into play.  Since the ball is accelerating on its way down, due to gravity, a ball that drops four feet will average 8.4 mph during its fall. Thus, you will have less time to hit the ball versus tossing the ball to your contact point, where the ball would be stationary or close to it and moving at nearly zero mph.   It is much easier to hit a stationary target than a moving target.

What coaches should say is that tossing out of your reach will give you more time to swing and in reality less time to hit the ball.  A player does not need much time to swing.  It takes Sharapova about 1.1 seconds from the time her toss leaves her hand for her to contact the ball, compared to John Isner’s 0.7 seconds. This is because Isner’s toss is significantly lower than Sharapova’s.   Isner hits the ball within inches of the peak of the toss, giving him more time to hit the ball than Sharapova.   The height of the player doesn’t matter.

No matter how high you toss the ball, you have a maximum of how high you can reach with your racket, which is about 22 inches out of your outstretched hand.  In reality, the toss should be pretty much the same for every person, since most players play with a racket that is 27 inches long.   A person who is 5ft 10in tall can only reach around 8ft 11in off the ground with their outstretched racket.  If you tossed 10 feet higher than your outstretched racket, you would have to wait for the ball to come back down 10 feet to your 8ft 11in reach.  So, the question becomes, how high is too high?

Last but not least, there is a direct correlation between tossing out of your reach and a loss of power. In addition, you lose consistency and accuracy as the height of the toss increases.

So give yourself less time to swing with a lower toss but more time to hit the ball, and you will find yourself hitting a more fluid and powerful ball.

Here are the numbers. Notice that within just a few feet how quickly the speed of the ball increases.