By Miles Maclagan in Strokes and Strategy

Professional and recreational players employ the slice backhand to set up an approach shot, to slow down the ball while recovering from a defensive position, or to handle a low bounce. The motion of “slicing” the strings underneath the ball creates backspin and while this shot helps pros reset the point, a savvy weekend warrior may even use the technique to hit outright winners against unwitting opponents.

Miles Maclagan currently coaches British No. 1 Laura Robson and formerly guided World No. 2 Andy Murray to beat some of the best players in the world on some of the biggest stages. Maclagan says that one of the shots which Murray uses to gain an advantage, the slice backhand, should also be used by recreational players to unsettle an opponent. Here are his tips for hitting a killer slice backhand.

Whether you use an open or a closed stance, the shoulder turn is necessary for a smooth slice. Rotate your upper body so that your chest is facing the sideline and raise your racquet around shoulder height. Use your non-dominant hand on the throat of the racquet to aid the shoulder turn and to get your racquet into the right position until you begin the shot,

Bending your knees is crucial, especially for dealing with a low-bouncing ball. A good knee bend allows you to hit through the ball and penetrate the shot as the racquet slides underneath the ball. Roger Federer bends his knees very well, as did Tim Henman in his time. The increased use of topspin, however, means that players on the tour don’t have to deal with low balls as much as they did in the past.

A slice shot affords you the time to take a long swing, but I've noticed that some club players don't execute the stroke properly and instead tend to muscle the slice with a short, volley-like swing. A slice is a smooth shot for which you need to make sure you get the racquet nicely behind you to take a longer swing at it, though as with all shots, you'll need to accelerate through the ball, but swing high to low and away from your body while transferring your weight forward.

4. Think about what you’re trying to achieve

From a tactical point of view, the key is to realize what you’re trying to do with the slice backhand and not try to do too much with it. Usually, the best players don't use the slice as a winning shot, but instead seek to put the ball in an awkward position for their opponents.

WHAT NOT TO DO

1. Don’t chop down on the ball

Club players often mistakenly believe that they can produce slice by chopping down on the ball rather than hitting through the ball with a longer swing. The ball is traveling in a roughly horizontal line, and if the racquet is moving vertically, it’s harder to meet the ball in exactly the right spot. This means that you end up getting too much spin, too much cut and the ball doesn’t penetrate through the court. Players like Roger Federer and Tim Henman actually hit the slice very hard, and he was able to do that because he wasn’t chopping down on the ball.

The slice is most effective when the player isn't attempting to be fancy. Be aware of the situation: if you’re in a defensive position, just look to return the ball deep and low, or even short and low, to neutralize your opponent on the next shot.

WHAT THE BEST PLAYERS DO WELL

Players very rarely, if ever, try to hit a winner off the slice. The point is to employ the technique at the right moment and realize what outcome you want to produce. Federer is effective because his opponents know they can’t just push the ball back in the court off the slice, or he'll pounce on the next ball and nail the forehand. So, the error is forced by the situation. 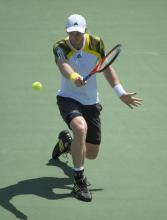 Murray has great feel on the ball, and he uses the slice quite creatively to mix up play. He uses the slice well defensively, he has good touch on both sides and he’s able to slice the ball deep back to the baseline so many times. His incredible speed makes his slice more effective.

Murray also uses the slice down the line to open up the court, which makes other players feel like they have to do more with the ball, maybe press a bit too much. He’s good at using it to bring them into areas where they’re not comfortable. Because he’s got good feel on the shot, he can play a short slice. This is effective because a lot of players today aren’t comfortable coming forward, so he’s bringing them into the net on his own terms, which they don’t like. 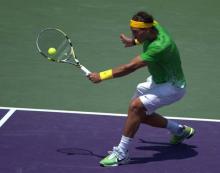 Like Federer, when Nadal hits a slice, we all know what he’s looking to do with his forehand, so you can’t just send it down the middle of the court. The slice backhand is a shot he’s definitely added to his game since he first came on the tour to help him mix up play. 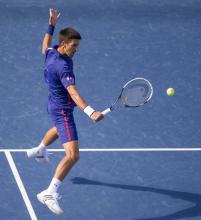 Djokovic and Nadal’s backhand slices are among the best on the tour, in my opinion, but because they time the ball so well you don’t actually see the quality of the hit they put on the ball. Djokovic has a solid slice backhand, which he utilizes quite well, and the ball always comes off his racquet cleanly.

Identify the perfect moment to use the shot

HIT A DROP SHOT DISGUISE OFF OF A SLICE

Keep the same technique for both the normal backhand slice and drop shot slice to disguise your intentions. Turning the shoulders on both shots will help make it harder for your opponent to read what you’re doing. Don’t be tempted to use a shorter swing on the drop shot; all you need is a slightly finer contact with the ball. Whether the stroke ends up being a deep slice or a drop shot should simply be about applying more or less acceleration off the same swing.

Andre Agassi in the latter part of his career started playing a drop shot off the slice, and he excelled at choosing the right moment in the rally. He would set it up by punching a few backhands to get his opponent on the back foot, then switch to the slice to play the drop shot. His grips allowed him to do this because they weren’t extreme, so there wasn’t too much of a grip change needed between his double-hander and his slice.

On the 1st serve

The technique on the sliced backhand return is a bit different because it’s more of a block, particularly on the first serve. You want to have a much shorter swing than on a normal slice because you’ll be using the pace from the opponent’s serve. You also want to keep a square racquet face as much as possible so you have more chance of making a clean contact.

On the 2nd serve

When you watch Roger Federer hit the sliced return, notice how much cut he’s getting on that ball. Although the racquet is moving from high to low, it’s still traveling through the line of the shot, so the ball stays very low. Rather than using the return as an offensive shot,  his idea is to push the ball back and be aggressive with his forehand on the next shot.