Ten years ago, looking out to the ever-evolving landscape of women’s tennis, it seemed that the sport was thundering irresistibly towards a single destination. The years prior had showcased the rise of the hybrids - this otherworldly army of women who seemed to steal into Planet Earth one dark and lonely night from far out in the vast realms of space. One by one they unleashed their biological superiority over the tennis world and launched themselves straight to the pinnacle of the rankings. At that time, it seemed the following years would see these supreme athletes continue to embark on the sport and transform it.

These privileged few cascaded into the game with this unheard-of ability to tick every single box on a tennis court and, in the process, rewrote the most basic rules of the sport. Before their arrival, tennis was driven by the core definitions that described every player. Serve and volley players simply serve and volleyed; they did not earn their keep by hitting forehands and backhands all day. Retrievers only edged up past the baseline to change sides or shake hands. Baseliners, as expected, remained on the baseline.

But here they were, this formidable group who made a mockery of the definition of “definition.” After all, how does one define a power hitter who crashed into every point with a barrage of hammer blows yet simultaneously possesses the ability to soar from sideline to sideline at any given time and effortlessly track down balls? Or else the feathery retrievers who firmly reserved the right to step in and command points. Between those two extremes stood a melting pot of players riddled with variety who delighted with their abilities to do a bit of everything, and do it well.

In the years following, our eyes have slowly become re-accustomed to the return of rigidity in this era of tennis. In contrast to the fluid unpredictability of a decade ago, the games of most top players today can be read with all the ease of a children’s picture book. The power hitters contribute little more than power hitting, while the retrievers clean up errors but rarely attempt to hit back when the errors evade their opponents. Nostalgia rules supreme, and it was this nostalgia of a far greater time that perhaps egged Carlos Rodriguez back into the world of tennis and coaching. 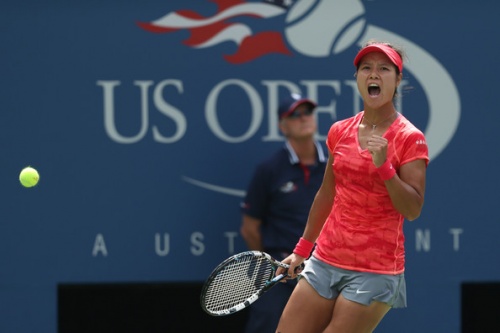 Of all players, his decision to answer the call of a 31-year-old veteran in Li Na, rather than any other young player he could have molded into his vision, endlessly intrigues.  Li is a byproduct of that era of undefined greatness but one whose game has crystallized in this current era of crippling rigidity. At times, her uncompromisingly hammer blows soar with brutal beauty past her opponents and have earned her plenty of notable victories. But they also can endanger not only Li but the onlooking crowds as they transform watching a tennis match into a frantic game of dodge ball.

Peering at nothing but her crushing strokes, it could be easy to conclude that Li is one of the many who have little choice but to launch into a careless barrage of risky ball-striking because of mediocre movement. But it is not the case. Li is strong, fast, solid on serve, clean in technique, and has the distinctive talent of being able to flick her wrist and redirect tennis balls at pace with ease. Her talent overflows, but her game is yet to match up to it.

By Li’s own reckoning, the beginning of her partnership with Rodriguez during the 2012 offseason saw them deconstruct each and every part of her game before reassembling them in his image. Li’s serve now stands as one of the most seamless on tour, her movement swift and sleek to match her raw speed, and her volleys technically sturdy if not quite confident enough. Her forehand has also evolved into a hookier heavy stroke more to Rodriguez‘s liking.

Back at Wimbledon, Li Na’s performance fell short, but her commitment to storming the net 73 times in a single match was extraordinary for a player previously allergic to the forecourt. Against the  chronically inconsistent power of Laura Robson on Friday, Rodriguez set Li up in a different fashion. Instead, she played with a tightly controlled aggression, focusing on crippling the Brit with relentless depth and weight of shot. Li relied far more on her defense and movement than her offense to prevail. The result was a tactical master class that hinted at her ability to play tennis as though it were 2003 all over again.