Among the most global of all sports, tennis draws strength from its diversity.  Players from a sprawling array of regions and cultures strive for excellence on the court each week.  This latest edition of the week in review pays tribute to this phenomenon by grouping players by nation in discussing their exploits in Portugal and Munich. 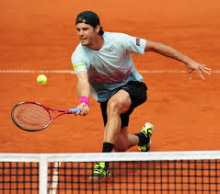 German men:  With a BMW at stake in one of their home tournaments, three local heroes reached the Munich semifinals.  The most surprising effort came from qualifier Daniel Brands, who won consecutive three-setters against much more heralded names Gael Monfils and Janko Tipsarevic.  An imposing server with a second-week appearance at Wimbledon to his credit, Brands finally bowed out in a semifinal thriller to compatriot Philipp Kohlschreiber.  This fourth-seeded German often has shone on home soil, as a Munich title and an upset of Rafael Nadal in Halle last year showed.  Snatching victory from the jaws of defeat against Brands, Kohlschreiber rallied from losing the first set and from trailing by a break in the third.  He threatened to repeat the feat in the final but could not survive a tenacious effort from the 35-year-old Tommy Haas.  Seeded third in Munich, Haas lost just one set all week before earning a sleek BMW Z4 in which to chauffeur his infant daughter, Valentina.

Spaniards:   Much more than Rafael Nadal, they produced their own version of Daniel Brands in Pablo Carreno-Busta.  This plucky qualifier had spent most of his career in challengers before reeling off six victories in Portugal, three in qualifying and three in the main draw.  Carreno-Busta bounced back from losing the first set three times, showing a confidence surprising in someone with relatively few accomplishments.  One week after Milos Raonic barely snapped his eight-match winning streak, Tommy Robredo continued to produce solid clay-court tennis with a quarterfinal result.  Robredo’s recent resurgence gained him a wildcard into his home Masters 1000 tournament at Madrid, where top-ranked Spaniard David Ferrer could face him.  The top seed in Portugal, Ferrer recovered from a demoralizing opening-round loss in Barcelona to reach the final, although he could not quite capture his second title of the year.  Falling just short as well was his countrywoman Carla Suarez Navarro, the runner-up in the Portugal women’s draw.  The small counterpuncher did not drop a set en route to a second 2013 final on her best surface. 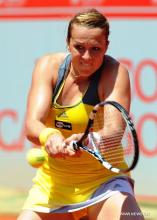 Russian women:  Halting Suarez Navarro in the Portugal final was the first woman outside the WTA top four to win a title this year.  Few would have guessed that Anastasia Pavlyuchenkova would claim that distinction in view of her six opening-round losses since January.  But the Russian, a former Roland Garros quarterfinalist, has proved remarkably dangerous when surviving that initial hurdle.  Pavlyuchenkova needed a third-set tiebreak to survive compatriot Elena Vesnina in the quarterfinals, ate a first-set bagel in her semifinal, and saved set points in the first set against Suarez Navarro.  Her resilience separated her from 2009 Roland Garros champion Svetlana Kuznetsova, who started the tournament impressively by upsetting the sixth-seeded Varvara Lepchenko.  A dismal quarterfinal effort tempered optimism over Kuznetsova’s chances of scoring some notable upsets this clay season, however. 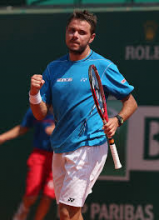 Swiss:  The woman who stopped Kuznetsova in that quarterfinal, Romina Oprandi echoed the recent clay success of compatriot and Charleston runner-up Stefanie Voegele.  A little-known counterpuncher who reached a Premier Mandatory quarterfinal in Beijing last fall, Oprandi lost just fourteen games in her first seven Portugal sets.  Outlasted by Pavlyuchenkova in a three-set semifinal, she could not quite match what countryman Stanislas Wawrinka achieved.  The man who has spent his entire career in Roger Federer’s shadow scored his second victory over a top-four opponent this clay season by dominating Ferrer for the Portugal men’s title.  Avenging a loss to the Spaniard on South American clay, that breakthrough could not have diverged more from the shaky three-setter with which Wawrinka started the week.  Like Pavlyuchenkova, he played himself into form and became more dangerous with each victory.

Serbian men:  This nation’s superstar trio of Novak Djokovic, Ana Ivanovic, and Jelena Jankovic took the week off, but Djokovic’s two leading understudies threw their hats in the ring for the BMW.  Again a disappointment as a top seed, Janko Tipsarevic slipped to 2-3 on clay this year and 4-8 since the Australian Open.  The third-ranked Serb, Viktor Troicki, has struggled nearly as severely this year but showed signs of hope in Munich with two comfortable victories and a second straight quarterfinal.  Perhaps the extra time allowed by the surface will allow Troicki to recapture his rhythm.

Croatian men:  The second seed in Munich, Marin Cilic continued his career-long woes on clay by dropping his opener in straight sets.   Fortunately for this nation’s pride, compatriot Ivan Dodig delivered that blow to the top-ranked Croat and rode the ensuing momentum surge to the quarterfinals.  Also not at his best on clay, Dodig probably benefited from a height more modest than the towering players whom Croatia usually produces.  Those giants lack the mobility and versatility rewarded on this surface.

Italians:  Much more naturally skilled on clay, by contrast, the Italians produced mixed results in Portugal.  Monte Carlo semifinalist Fabio Fognini struggled through his first match in three sets before falling to Pablo Carreno-Busta, unable to extend his momentum from that breakthrough.  Also unable to extend her momentum was Francesca Schiavone, who yielded meekly to lucky loser Monica Puig a few days after winning the Marrakech tournament.  Ending a three-match losing streak, however, Andreas Seppi recorded convincing victories over two fellow clay specialists.  This surge came at a critical time before Seppi defends his strong clay results from 2012.

Romanians:  A promising hard-court stretch in February and March has not translated into much clay success for Sorana Cirstea, a former quarterfinalist at Roland Garros.  Despite her affinity for clay earlier in her career, Cirstea followed a first-round exit from Fes with a rout at the hands of Kaia Kanepi in Portugal.  On the other hand, compatriot and occasional mixed-double partner Victor Hanescu overcame his limited mobility to reach a second straight quarterfinal on the surface.

Baltic states:  The aforementioned Kaia Kanepi has begun to gain traction in her comeback after winning just one match in each of her first two 2013 events.  Charging to the Portugal semifinals with three straight-sets victories, this Estonian still may have enough time to round into form ahead of defending her quarterfinal points at Roland Garros.  Unfortunate to draw Haas in the second round of Munich, Latvian talent Ernests Gulbis became the only man to win a set from the eventual champion there.  A Monte Carlo stumble aside, Gulbis has continued to produce quality tennis as he transitions from hard courts to clay and keeps moving up the rankings.

French:  Beset by coaching turmoil this spring, Marion Bartoli has strewn double faults throughout her current slump.  She lost her fourth straight match outside Fed Cup as the top seed in Portugal, bageled en route to defeat by fellow double-fister Peng Shuai.  Her compatriot Julien Benneteau also watched his losing streak reach five when Carreno-Busta eased past him to start the week.  After reaching the Rotterdam final in February with a victory over Federer, Benneteau has won only one match since then

Argentines  Vina del Mar champion Horacio Zeballos looks increasingly like a one-hit wonder whose greatest feat will remain his upset over Nadal there.  In Portugal, this lefty lost for the eighth time in eleven matches following his Vina del Mar title, while Carlos Berlocq also has not translated his solid results on South American clay to its European counterpart.  Injury woes continued to plague some of this nation’s more familiar figures, as Juan Martin del Potro withdrew from the Masters 1000 tournament in Madrid.  Davis Cup stalwart and former Wimbledon finalist David Nalbandian may have played his last competitive tennis before undergoing a six-hour surgical procedure on his shoulder last week, from which few players return.  The aging Argentine at least can look forward to the birth of his daughter this month as consolation.