Gauff Fights Through In Lexington

Sixteen-year-old American tennis sensation Coco Gauff seems like an old soul. Somehow knowing how to win, as if she’s known how to win all her life and in many lives.

Afterward, in her on-court interview, Gauff told the keys to winning the third set: “To be honest, just to stay calm and composed and making her play balls. I think in the second set I started double-faulting more and making more errors, so that resulted in that, so my goal was just to make her play as many balls as possible.”

Though the match was topsy-turvy, Sabalenka, the world No. 11, looked like the better player, with her dazzling power. If Sabalenka could dim that power, and then light it up when she needed it, she could add that variation of surprise. Sabalenka, who is terrifically fun to watch, puts in so much effort, but she could play more efficiently with variation at the right moments. 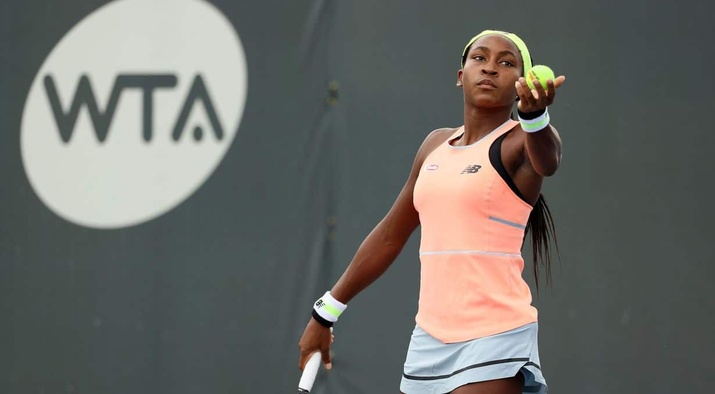 In the first set, Sabalenka got the first break to go up 2-1, but Gauff broke back and held with an ace down the T. Gauff held and broke again for 5-2, racing to a drop shot for a winner. Sabalenka, showing better shot selection, held at love with a piercing backhand up the line, then broke for 4-5 and held for 5-all, and staying patient with the rallies, broke again for 6-5.

At this point, there was a dispute between Gauff’s father, who is her coach, and the umpire. Because of COVID-19, there is no on-court coaching, but coaches are allowed to talk to the player when they’re on the same side and use hand signals when they’re on the opposite side.

Gauff, though, kept her composure and proceeded to break, and in the tiebreaker got up 5-love, yelling “Come on!” Sabalenka responded with an ace, a blistering backhand down the line, an inside-out forehand winner, and a big serve to the backhand, which was netted by Gauff. But that was not enough, and Gauff took the set, showing her incredible movement by once again running down a drop shot for a winner.

In the second set, Sabalenka dominated with her power, blasting a serve and backhand swinging volley winner. Gauff’s service motion looked slightly out of rhythm, resulting in more double faults. Sabalenka, playing beautifully, broke at love and held at love to go up 4-1.

Gauff finally stopped the Sabalenka streak and held at love for 2-4. Sabalenka held for 5-2. Gauff then hit a magical half-volley to hold and then broke for 4-5. Gauff was serving and got down love-30, double-faulting again, giving Sabalenka three break chances. Sabalenka converted.

In the final set, Gauff broke in the first game and held for 2-love. Sabalenka responded with a love hold and a break for 2-all. Gauff then broke by making Sabalenka play that one extra ball, while Sabalenka fired out three easy putaways. Sabalenka broke back for 3-all, as Gauff netted a couple of neutral balls and hit her tenth double fault. Sabalenka saved a break point, getting a big hold to lead 4-3. Gauff held for 4-all, staying poised and positive, shouting another “Come on!” She then broke for 5-4 and held to win the match, advancing to the quarterfinals.

In her wise-beyond-her-years way, Gauff said about her gritty win: “I guess everything was an A except the serving. I definitely served better yesterday than today. But you have good days and bad days, and I guess that comes with it. I like to go for my serves. It’s a give or take.”