The charismatic Francesca Schiavone blossomed late in her career, claiming the title at Roland Garros in 2010 and reaching her first US Open quarterfinal that year.  Ever a tireless competitor, Schiavone appeared in her 53rd consecutive major at the 2013 US Open, among the five longest such streaks currently underway.  The Italian has relished the chance to play on grand stages throughout her career, so the opening night on Arthur Ashe Stadium seemed a situation to inspire her. 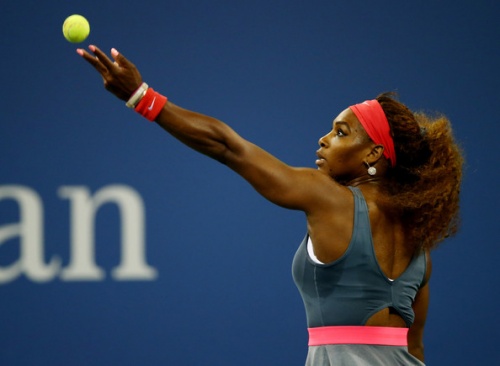 Less inspiring for Schiavone was the sight of a 16-time major champion striding onto the court behind her in a striking red-and-gray ensemble.  World No. 1 Serena Williams had lost just five games when they met at the Rogers Cup this summer, although Serena struggled early in that match.  Still, she never had lost in the first round at a hard-court major, and her serve gives her a massive edge on fast courts over the Italian’s vulnerable delivery.

Schiavone’s experience and fierce competitiveness likely tempered the nerves that a younger, rawer woman might have felt in these circumstances.  Her only chance to trouble Serena consisted of varying her spins and speeds to disrupt the favorite’s rhythm from the baseline.  The world No. 1 looked in no mood to let Schiavone dig into the rallies, however, contemptuously swatting returns of serve off sidelines in the first game.

Serena looked crisper at the outset than she had on the slower courts in Toronto, preparing for her shots with disciplined footwork and efficient movement.  The modest pace on Schiavone’s groundstrokes gave Serena time to line up her targets as she jerked the Italian from side to side.  A 116-mph serve in the second game confirmed her intent.  The resourceful Schiavone tried to test Serena with gambits like moonballs, but the favorite pounced on those for comfortable swing volleys.

In the first-set bagel that she absorbed, Schiavone won just six points.  The main challenge for the world No. 1 now consisted of maintaining her focus against a fellow veteran who has the alertness to exploit any lull.  The first game of the second set saw Serena experiment with some less characteristic tactics, such as a bold net approach and a slice-to-slice exchange.  As one might expect, such tactics played into the hands of the underdog, who won both of those points.  But two double faults prevented Schiavone from capitalizing on her successes and contributed to yet another break.

A dollop of carelessness crept into the ensuing service game before pinpoint first serves erased the threat.  Schiavone responded to the ongoing humiliation with charm, however, wrapping her arms around a ball boy in a whimsical hug.  Never did she earn a game point until she trailed 0-6, 0-4, much too late to be competitive.  Schiavone did avoid the first double bagel of her career, but she succumbed just a few minutes later 6-0 6-1.

Never challenged by the fading Italian veteran, Serena next meets Galina Voskoboeva in the second round of her title defense.  Two more victories could arrange a rematch of her Australian Open loss to compatriot Sloane Stephens, who barely scraped through today.  Tonight, though, Serena fired her first salvo across the bows of her rivals while dazzling the audience at the first Primetime match of 2013.