The sun returned on Saturday after two days befuddled by rain, allowing Wimbledon to set its lineups for Monday’s pivotal fourth-round encounters. 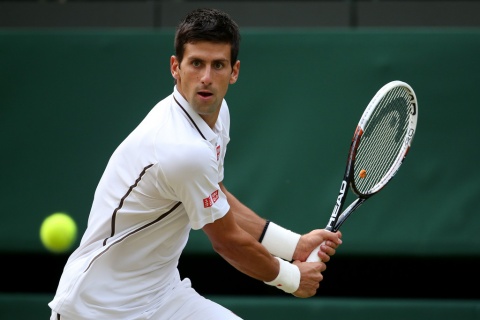 Novak Djokovic:  Perhaps benefited by his opponent’s fatigue, the world No. 1 delivered his strongest statement to date at this Wimbledon.  Jeremy Chardy had played the last two sets of his previous match on Friday, and he won just seven games from Djokovic on Saturday.  The route should grow significantly more intriguing for Djokovic from here, however, for his upcoming opponents have troubled him on grass before.

American women:  Without much ado, Serena Williams recorded the 600th victory of her legendary career as she brushed aside Kimiko Date-Krumm.  The defending champion became one of just three women to reach the second week at every major this year, joining Agnieszka Radwanska and—unexpectedly—Sloane Stephens.  For the second time this year, Stephens won a match in which she lost a 6-0 set.  She recovered overnight from that embarrassment to complete a victory over Petra Cetkovska today that carried her deep into an open draw.

Although Madison Keys could not deliver the upset of the day over world No. 4 Radwanska, this rising star gave last year’s Wimbledon finalist plenty to ponder over the course of three sets.  Keys has vaulted from near-anonymity a year ago to perhaps the greatest hope in the future of American women’s tennis.  Her power evokes Serena, especially on serve, and she has shown signs of developing into a sturdy competitor as well.

Bernard Tomic:  Two rounds after he sent home Sam Querrey, the top-ranked Australian added another, more notable seeded scalp by upsetting world No. 9 Richard Gasquet.  Both men have played some of their best tennis at Wimbledon over the years, so they engaged in an extremely tight four-setter decided by just a handful of points.  Tomic has shown remarkable (and, frankly, uncharacteristic) poise in coping with the controversy surrounding his father while producing his best tennis of the year so far.  Perhaps the maturity gained from that experience will trickle over into improving his on-court discipline.

ATP towers of power:  But Tomic will face a difficult test in the next round against 2010 Wimbledon finalist Tomas Berdych.  The Czech kept his hopes alive by regrouping from a one-set deficit against Kevin Anderson, an opponent whom he has defeated no fewer than nine times in the last 18 months.  Even more impressive than Berdych was Juan Martin Del Potro, into the second week at his worst major without dropping a set.  Much ink has spilled on Del Potro’s grass shortcomings, but he could silence the doubters and build momentum for the US Open with one or two more victories. 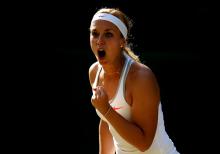 WTA snakes in the grass:  An upset that hardly felt like an upset, Sabine Lisicki’s victory over Samantha Stosur carried the German to the brink of a fourth Wimbledon quarterfinal in five years.  Like Berdych, Lisicki responded courageously to the loss of the first set, and she will need that courage when she faces Serena on Monday.  Also aligned against a top-four seed then is Tsvetana Pironkova, who will meet 2012 runner-up Agnieszka Radwanska after she defeated the resurgent Petra Martic.  Famous for two victories over Venus Williams on these lawns, Pironkova is a different player at Wimbledon than she is anywhere else.

Spanish men:  Dodging the upset bullet by a narrow margin, David Ferrer continued to live dangerously as he needed 13 total sets to survive his first three matches.  The latest wobble came against Alexandr Dolgopolov, an antithesis to the steady Ferrer with his unpredictable, quirky playing style.  Ferrer trailed by two sets to one but showed his resilience by dominating a wearied Dolgopolov in the fourth and fifth sets.  Less eventful was the progress of Fernando Verdasco, nobody’s prediction for the last Spanish lefty left in the draw.  Verdasco also faced a dangerous opponent in Ernests Gulbis, though, so his straight-sets victory ranked among his most notable of the year.  With a quarterfinal berth in sight, he could rehabilitate his ranking from its recent plunge.

Poland:  Not a traditional tennis power, this nation sent three of its players into the second week and can anticipate at least one semifinalist.  Lukas Kubot’s dominant perforrmance against a seeded opponent, Benoit Paire, moves him within one round of an all-Polish quarterfinal against Jerzy Janowicz.  In contrast, Agnieszka Radwanska needed to battle to survive Madison Keys in the women’s draw, and she now faces another potentially thorny assignment against Pironkova.

Monica Puig:  The Puerto Rican talent may be the least expected member of the women’s final sixteen.  After she upset Sara Errani in the first round, Puig capitalized on the breakthrough with two more victories that set up a Monday meeting with Stephens.  She especially impressed with her ability to turn around a third-round match that she trailed by a set and a break when play resumed on Saturday. 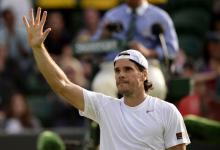 Tommy Haas:  One of Monday’s most intriguing men’s matches will pit Djokovic against a man who has won both of their grass meetings, albeit four years ago.  Tommy Haas aims to rekindle the magic of his Miami victory over the world No. 1, who defeated him at Roland Garros last month.  For the second straight major, the 35-year-old German won best-of-five matches on consecutive days.  He knocked off three-time Wimbledon quarterfinalist and Eastbourne champion Feliciano Lopez in four solid sets, so Djokovic cannot take him lightly.

Laura Robson:  Her victory over Marina Erakovic did not feature her best tennis, but it did feature a strong competitive effort from the British youngster.  Robson lost the first set resoundingly and stared elimination in the eye when Marina Erakovic served for the match in the second set.  Once she escaped that peril, Robson wasted no time in asserting her control over the final set, much as fourth-round opponent Kaia Kanepi had in her previous match.

Andreas Seppi:  Better known for its prowess on clay, Italy has sent four of its warriors into the second week on the Wimbledon grass.  Joining Roberta Vinci, Karin Knapp, and Flavia Pennetta was a man who barely has kept his head above water this year.  Andreas Seppi muddled through the first five months with a winning percentage barely above .500, but an excellent grass season continued with a five-set victory over No. 12 seed Kei Nishikori.  He now will seek his first major quarterfinal against Del Potro, who can expect grittier resistance than he faced in his three previous matches.

2011 women’s major champions:  Neither Li Na nor Petra Kvitova produced their best tennis from start to finish in third-round victories over Klara Zakopalova and Ekaterina Makarova, respectively.  When the finish line loomed, though, both women mustered just enough to edge across it.  Li prevailed 8-6 in the third set, while Kvitova returned from an overnight suspension to erase a third-set deficit.  The Czech, who won the title here two years ago, remains the best hope for an entertaining women’s final as the only real threat to Serena in the bottom half of the draw.