Dodging the raindrops on Friday, a curious assortment of home hopes, rising stars, and underdogs extended their Wimbledon fortnights. 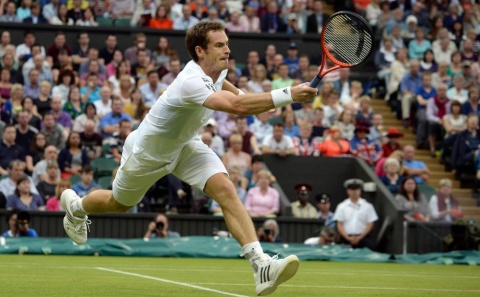 British hopes:  As seeds crash and burn around them, Andy Murray and Laura Robson continue their smooth progress through the draw.  Murray has not lost a set through three matches, dispatching Roland Garros quarterfinalist Tommy Robredo most recently.  He can face no player ranked higher than No. 20 Juan Monaco en route to the final (and probably will not face even that Argentine clay specialist).  The greatest challenges for Murray moving forward will come from the sort of raw, unvarnished power-hitters whom he specializes in disrupting.

A potential route to a first major quarterfinal lies open for Robson, who shone on Centre Court in a second straight routine victory.  The fiery lefty has mastered the moment with maturity so far and used the occasion of playing at her home major as inspiration rather than a burden.

Marion Bartoli:  Six years have passed since Bartoli reached her only major final to date.  The memories of that fortnight at the All England Club may have steadied her game, which has faltered of late.  Bartoli has surpassed expectations by maneuvering into the second week of Wimbledon, where she can face no higher-ranked opponent until at least the semifinals.  With top-ranked man Jo-Wilfried Tsonga gone and men’s No. 2 Richard Gasquet struggling, France still has plenty to watch.

Kaia Kanepi:  Two points from defeat, the burly Estonian snatched five straight points in a second-set tiebreak against world No. 7 Angelique Kerber and never looked back.  Kanepi reached the Wimbledon quarterfinals three years ago and the Roland Garros quarterfinals last year, so she has more experience than her ranking would suggest late in major draws.  Once she seized the upper hand, she never let Kerber back into the match.  This upset came as much less of a surprise than most, considering Kanepi’s history, but it leaves only four top-ten women in the draw.

Grega Zemlja:  A minor upset came from the racket of the unseeded Slovene, who won the longest final set of the tournament so far from Grigor Dimitrov.  Zemlja’s effort spanned two days, for he failed to convert a match point at 7-6 in the final set before the tournament suspended play at 9-8.  The resumption on Friday lasted only  a matter of minutes as the underdog halted Dimitrov with a match-ending break in the 20th game.  Success at majors continues to elude the Bulgarian, gone by the second round in all of his appearances at that level except Roland Garros this year.

Jerzy Janowicz:  The lanky Pole burst onto the tennis scene last fall by reaching the final at the Paris Indoors, suggesting his ability to excel on fast surface.  Janowicz’s shot-making had grown too undisciplined for most of this year, however, as his progress stalled.  At Wimbledon, he has shown greater purpose and focus in reaching the second week at a major for the first time.  Not dropping a set through three rounds, he pounded top-20 opponent Nicolas Almagro into submission with 30 aces across three sets on Centre Court.  We should see him again there soon.

Jurgen Melzer/Karin Knapp:  This pair of players accomplished what Roger Federer and Maria Sharapova could not, dismissing giant-killers Sergiy Stakhovsky and Michelle Larcher de Brito.  A former doubles champion at Wimbledon, Melzer surprises less with his second-week appearance than does Knapp, who never has survived the opening round before.

Flavia Pennetta:  Joining fellow Italian Knapp in the second week is a veteran who had fallen on hard times this year as she floundered in her return from injury.  Pennetta made the most of the walkover fortuitously handed her by Victoria Azarenka, rebounding from losing a 6-0 first set in the next round to upset No. 29 Alize Cornet.  Grass suits her more than it does most of her countrywomen, for Pennetta has defeated such powerful women as Sharapova and Venus Williams on fast surfaces before. 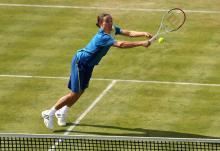 Alexandr Dolgopolov:  It seems fitting that this notably weird Wimbledon welcomes one of the ATP’s most eccentric characters to the second week.  Flying under the radar so far, Dolgopolov actually has advanced less eventfully than many of the familiar names still left in the draw.  He should have an excellent chance to upset David Ferrer in the third round, for the world No. 4 has struggled for both footing and form through his first two matches.

Kirsten Flipkens:  The heiress to Justine Henin and Kim Clijsters, Belgium’s new top-ranked woman has found those shoes often difficult to fill.  But this year has witnessed the best tennis that Flipkens has produced, including second-week appearances at two of three majors.  Her crisp play around the net could propel her even further into the draw, as a recent grass final at the Dutch Open hinted.

Adrian Mannarino:  Yet another player who never had reached the second week of a major before will taste that experience next week.  Virtually nobody would have expected the small, erratic Mannarino to feature on Manic Monday at the All England Club.  Like Janowicz, he has not lost a set in the tournament, although a retirement from John Isner smoothened his path.

Suspense:  As the skies darkened above London on Friday, two of the most notable women left in their half of the draw found themselves under pressure.  World No. 8 Petra Kvitova, a Wimbledon champion two years ago, entered a final set for the 11th time in 15 matches.  Almost simultaneously, American No. 2 Sloane Stephens allowed a hard-earned lead to slip away against qualifier Petra Cetkovska.  When play resumes on Saturday, Stephens at least will have the chance to start with a clean slate.  Kvitova must regroup from a shallow third-set hole that she dug for herself in the waning minutes of Friday.