No fewer than 20 matches reached a final set on Tuesday at Wimbledon, a contrast to the parade of straight-sets decisions on Monday.  On the other hand, no serious contender stumbled amid a drizzle of minor upsets. 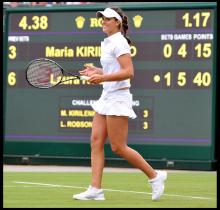 Laura Robson:  Back onto the same court where she lost to Maria Sharapova two years ago, the top British woman made certain not to confuse her Marias.  Robson ousted second-ranked Russian Maria Kirilenko, likely ending the latter’s stay in the top 10.  Her victory came more easily than most British fans must have expected, considering their nation’s tennis history.  But now the expectations will rise with that upset behind Robson and a comfortable draw ahead.

Top seeds:  Novak Djokovic arrived at Wimbledon without contesting a single match on grass this year and with his Roland Garros loss to Rafael Nadal likely still scorched into his memory.  A lesser competitor might have shown significant signs of frailty in that situation, tasked with a quality first-round opponent in Florian Mayer.  To his credit, Djokovic denied this underdog a set and even a tiebreak on a day when projected semifinal opponent David Ferrer struggled.

As expected, defending champion Serena Williams opened proceedings with an uneventful victory that extended her winning streak to 32.  Serena looked the most impressive of the top three women in the first round and should not encounter her first serious test until next week.

Tall men:  Gone in the first round last year to Ernests Gulbis, former Wimbledon finalist Tomas Berdych also had lost to Gael Monfils in the first round of Roland Garros last month.  Whatever nerves he might have felt against Martin Klizan, a less formidable foe, did not forestall a convincing victory.  Also advancing in style was the Tower of Tandil, Juan Martin Del Potro.  The former US Open champion generally plays his least imposing tennis on grass, where he struggles with the low bounce, but this confident start should have boosted his spirits.

Li Na:  Like Berdych, she left Roland Garros much sooner than she would have wished and has not accomplished much on grass recently.  Tasked with a difficult draw, Li still made short work of the powerful Michaella Krajicek as she attempts to reenter the circle of contenders.  She occupies the quarter of the draw without any member of the WTA top three, so opportunity knocks if she can seize it.

Bernard Tomic:  Among the day’s most scintillating action was the five-setter that he won from Sam Querrey, a top-25 opponent.  Tomic always has shown a fondness for rollercoasters at majors, once reaching the second week of the Australian Open after playing 14 sets in three matches.  He stayed true to that trend in declining to close out this match efficiently when he held a two-set lead.  In fact, Querrey bounced back impressively from losing consecutive tiebreaks to dominate the next two sets as he leveled the match.  Tomic then abruptly snuffed out his hopes by regaining control of the proceedings when it mattered most.  This Aussie phenom remains undisciplined, unpredictable, and endlessly entertaining.

Feliciano Lopez:  Winning a tournament the week before a major often means little when projecting a player’s chances at that upcoming major.  Feliciano Lopez played his first match at Wimbledon just three days after he played the final at Eastbourne, so one could not have faulted him for a hangover.  Keeping his elation in check, the three-time Wimbledon quarterfinalist toppled Gilles Simon in straight sets in a statement of intent.  Eastbourne women’s champion Elena Vesnina also reached the second round despite her own hangover potential.

Tsvetana Pironkova:  Some of the WTA’s most notable snakes in the grass fell at the first hurdle, such as Tamira Paszek, Zheng Jie, and Daniela Hantuchova.  Far from following them to the exit, Pironkova reminded onlookers of her quarterfinal and semifinal appearances here by demolishing world No. 21 Anastasia Pavlyuchenkova.  Granted, Pavlyuchenkova has underachieved at majors recently, but losing only one game to an opponent of that quality should raise a red flag for future seeds near Pironkova.

Ivan Dodig:  Another man who shone in Eastbourne, Ivan Dodig did not relent when he lost the first two sets to Philipp Kohlschreiber.  The German had chances to close out the Croat in straight sets, but Dodig hung on by a thread and gradually wrested away the momentum.  When Kohlschreiber retired early in the fifth set, a quarter of the Wimbledon men’s top-16 seeds had fallen in the first round.

Agnieszka Radwanska:  Mirroring the smooth progress of Li Na was a dominant victory by last year’s Wimbledon runner-up.  Radwanska reached the quarterfinals at each of the two previous majors this year, and a glance at her draw suggests that she could make it three straight if she builds on her commanding start.

Kei Nishikori:  Among the greatest threats to Ferrer’s progress might come from the Japanese star who defeated him on grass last year. A dominant performance against Australian serve-volleyer Matthew Ebden started Nishikori’s 2013 effort. His baseline style, honed at the Bolletieri Academy, does not suit grass as well as styles more oriented around attacking the forecourt.  But neither do the playing styles of most seeds around him.