Scanning the men’s draw before the quarterfinals at the BNP Paribas Open, it was tempting to anticipate the first semifinal lineup of the top four seeds at this event since 1987. The first two members of the Big Four moved into that stage uneventfully on Thursday, but Friday promised a sterner test for the two who remained. Roger Federer and Rafael Nadal both faced top-10 opponents in Tomas Berdych and Milos Raonic, respectively.

Federer’s task looked the more daunting at the outset, since Berdych had won five of their last nine meetings. He also had produced consistent tennis in 2015, reaching the semifinals at each event that he had played while stunning Nadal at the Australian Open. However, the Czech could not find a level of form even remotely close to what he had shown in Melbourne. Struggling almost from the outset, Berdych could not rely on either his mighty serve or his almost equally potent forehand. He survived a game with three double faults early in the match, but a pair of meekly netted forehands soon afterward set up Federer’s first break. 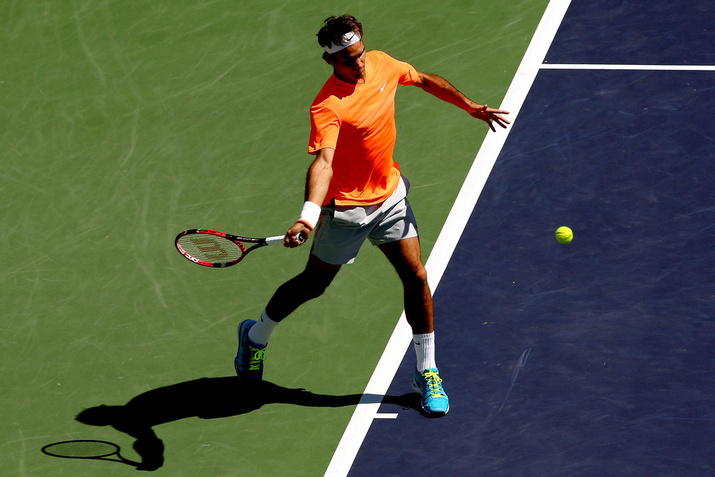 In contrast to Berdych’s futility, Federer dazzled in almost every facet of the game other than his first-serve percentage, which hovered around 50 percent for most of the match. He won his first 11 service points, carved crisp angles at the net, and showed no sluggishness in movement despite the early start time. He did face one uncertain patch when serving for the set. Opening that game with a double fault and a backhand error, Federer faced the prospect of being pegged back to 5-5 with the match still in the balance. A vintage display of clutch serving followed, including three straight first serves (two unreturned) and a pair of reflex volleys at the net.

That was the last real chance that Berdych would have to make a match of it. He did not win a game in the second set as Federer struck for a quick break in the first game and raced toward the finish line from there. Passive in ball-striking and subdued in body language, Berdych later admitted that he felt that he had no chance once he saw how well the world No. 2 was playing. Despite his respectable recent results against Federer, he put too much pressure on himself during the match. That pressure surfaced again with two more double faults in the third game of the second set.

Free from any hint of tension, Federer began to showcase his mastery of every aspect of the game. Its most fallible components, his return of serve and backhand, produced clean winners during one last break of serve. Just eight minutes past the one-hour mark, Federer served out the match at love. He has dropped just one service game en route to the semifinals and has not faced a break point in any of his afternoon matches. (He will not play at night again in the desert, since the semifinals and final are played in the afternoon.)

For most of the first two sets of the latter quarterfinal, it looked as though the 34th meeting between Nadal and Federer lay straight ahead in the desert. Nadal largely cruised on his serve, facing break points in only one game. He broke Raonic at love early in the first set, using his electric speed along the baseline to extend points and force the Canadian to play extra balls. Inconsistent during rallies, the younger man paid the price for his limited mobility on a slow surface and struggled to finish points. 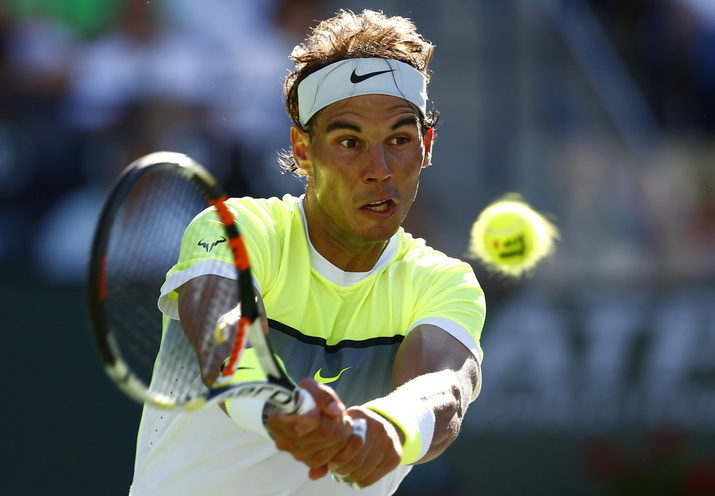 After a routine 6-4 first set, Nadal continued to pile on the pressure in the second frame. To his credit, Raonic dug into the trenches and found clutch first serves when he needed them to fend off break points. Nadal did put the serve back into play on a critical break point at 4-4, only to see the Canadian club an inside-out forehand. He then built on the momentum shift to earn two set points on Nadal’s serve in the following game. Finally putting more returns in the court and making the world No. 3 work harder to hold, Raonic constructed a rally that left him with a mid-court forehand that he could pound toward a corner. He drilled it into the net instead, and an ace bailed Nadal out of trouble.

The Spaniard soon guided the set into a tiebreak, where the two men traded more minibreaks than the preceding march of service holds would have suggested. Nadal held the match on his racket after a breathtaking forehand pass cleaned the corner. Serving at 5-4 in the tiebreak, he buried a forehand in the net. From there, the suspense mounted as neither man could gain separation. Raonic erased three match points, two with massive strikes. The third may be a moment that Nadal will regret. Gifted a look at a second serve, he retreated far behind the baseline and floated the return into the net. Two points later, the match stood even as the world No. 3 again found the net on a groundstroke.

No stranger to long matches, Raonic had mounted eight comebacks from losing the first set in the previous 12 months. Nadal still looked the more dominant of the pair on serve, not facing a break point through his first five service games. By contrast, Raonic shanked a handful of forehands and donated sporadic double faults that kept the Spaniard alive in return games. To the frustration of Nadal, however, he swiped away half-chance after half-chance with thunderous serves. Nadal’s consistency from the baseline started to wear down as the match progressed. He began to miss a few more routine shots after having been rock-solid earlier, whereas Raonic grew steadier.

Nevertheless, the Canadian stood on the brink of defeat once again when he served at 4-5. Nadal twice more stood within two points of the finish line, but three aces and a successful challenge kept Raonic alive. A long service game then unfolded on the Spaniard's serve, which had been unbroken to this stage. Raonic squandered one break point with an errant forehand, but he used that shot to craft audacious angles in the next rally and secure another chance. When the breakthrough came, it was largely fortuitous. Rather than cut off a floating Raonic retrieval in the air, Nadal let it go with the expectation that it would sail over the baseline. The ball landed in, forcing Nadal to attempt an extremely challenging shot on the full run with his back to the net. 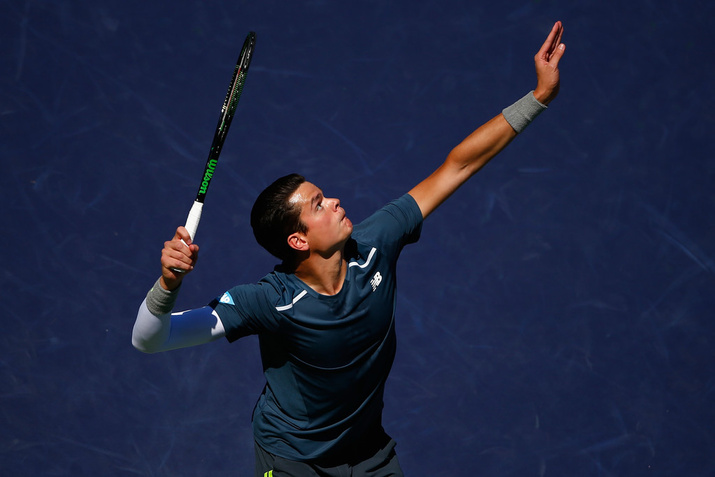 When it failed, the match was essentially over. Raonic pounded out two more aces in a comfortable service hold, capturing his first victory over the Spaniard in six attempts with a 4-6 7-6(10) 7-5 marathon that lasted two minutes under three hours. This weekend also will mark his debut in the Indian Wells semifinals, where he will face Roger Federer. Each man has dropped serve just once through four matches in the tournament, although Federer’s much shorter time on court may play a key role with a one-day turnaround.

Although Nadal will look forward to the clay season on the other side of Miami, he has plenty of missed opportunities to rue from this match. His passive positioning on returns in the tiebreak, the loose forehand that threw Raonic a lifeline during it, and the decision to let the ball drop down break point in the final set were the most notable of the lapses that derailed his Indian Wells fortnight. As Nadal pointed out afterward, however, battles involving a huge server like Raonic usually hinge on a handful of points. In areas such as the second-serve return, his timing and confidence will improve as he accumulates more matches and builds the rhythm that he needs. In the larger picture of the long tennis season, his sustained effort and physical resilience during the course of a three-hour slugfest with an elite opponent should stand him in good stead.