At the midpoint of Roland Garros, Saturday determined the last group of survivors who earned the right to reach the second week. 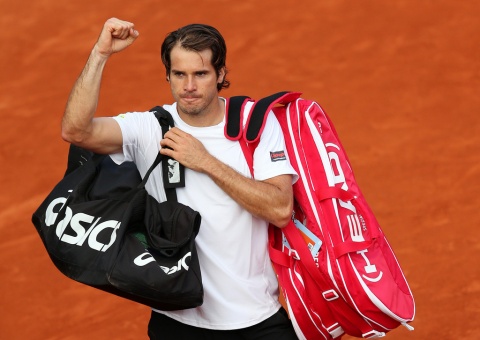 Tommy Haas:  At the age of 35, the evergreen German bounced back from playing three sets on the previous day to weather one of John Isner’s classic marathons.  Haas squandered a two-set lead against the American serving leviathan, never a wise idea, and let a staggering twelve match points escape him in the fourth set.  One of those came on a double fault in the fourth-set tiebreak, which could have crushed his spirits.  Instead, Haas patiently rallied back from a 1-4 deficit in the fifth set, saving a match point against him, and finally cracked Isner in the 17th game for the decisive break.  His gallant opponent, the last American man to exit Paris, also deserves credit for coming within two service holds from a second comeback in two days after losing the first two sets.  Isner’s fitness must be the envy of other men his size.

American women:  Three compatriots of Serena Williams joined the world No. 1 in the second week, a surprising development in view of their clay-averse reputation.  Sloane Stephens exploited an easy draw to reach the second week for the second straight major, breaking free from a recent slump.  More surprising were the feats achieved by Jamie Hampton and Bethanie Mattek-Sands.  Hampton stunned last year’s semifinalist and world No. 7 Petra Kvitova in the day’s most significant upset, while Mattek-Sands built on her earlier upset of world No. 6 Li Na with another three-set comeback.  All three of these less heralded Americans face tall tasks against seeded opponents in the fourth round, but all will bring the confidence to make those matches competitive.

Top men’s seeds:  Both Novak Djokovic and Rafael Nadal advanced in straight sets, although the Serb won much more convincingly than the Spaniard did.  Perhaps a little weary after playing four sets the day before, Nadal flirted with losing the first set for the third straight match before regrouping to finish strong against Fabio Fognini.  For his part, Djokovic emphatically dispatched Grigor Dimitrov to avenge his loss when they met in Madrid.  With the first week complete, he looks much the sharper of the two rivals atop the men’s game. 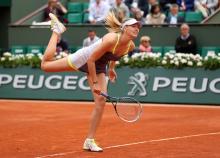 Top women’s seeds:  Overcoming fallible sequences, Victoria Azarenka and Maria Sharapova booked their places in the second week with strong finishes.  Azarenka encountered unexpected resistance from Alize Cornet, hardly known for her tenacity, and needed to rally after dropping a dismal first set.  Sharapova appeared likely to enjoy an uneventful afternoon when she cruised through her opening set, but some serving struggles and a general dip in form early in the second required her to rally from a double-break deficit, which she did.

Men’s one-handed backhands:  Other than Dimitrov, wielders of these weapons fared especially well as the first week concluded.  Swiss No. 2 Stanislas Wawrinka continued his scorching clay campaign by defeating a weary Jerzy Janowicz in four sets, while Mikhail Youzhny feasted on a similarly fatigued world No. 10 Janko Tipsarevic to score a straight-sets upset.  Joining them in the second week was Philipp Kohlschreiber, who eliminated fellow artist of the one-hander Victor Hanescu routinely.

Francesca Schiavone:  Many of us had given up on Schiavone after she started the season on a long losing streak.  Paris always brings out the best in her, though, and she has done her best to recapture the magic of 2010 and 2011 with an unexpected run into the second week, upsetting two seeded opponents so far.  Schiavone next will face Azarenka in a fourth-round clash of styles, just one of several fourth-round women’s matches that pit clay specialists against top-eight opponents.

Kei Nishikori:  The quietly composed Japanese star stayed steady through the ebbs and flows of mercurial French opponent Benoit Paire.  In this contrast of personalities, Nishikori weathered a second-set surge from Paire and regained control to win a four-setter filled with long service games.  Paire’s flurry of winners late in the second set may have sprung in part from his frustration with chair umpire Enric Molina, who (rightly, it appeared) denied him a set point because of a coaching code violation.