Only a handful of men’s matches unfolded on a day blighted by rain, while the women’s draw produced more results.  An avalanche of matches will cascade down Friday’s schedule of play, but here is a look at the limited events that unfolded on Thursday. 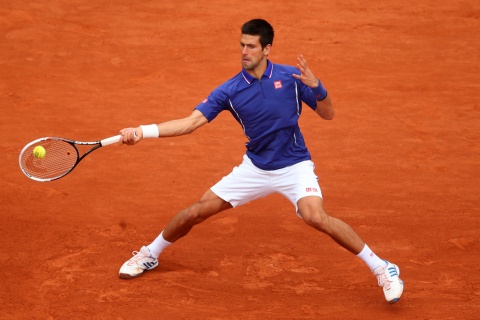 Novak Djokovic:  The world No. 1 showed no mercy to second-round opponent Guido Pella, losing just four games in a performance more emphatic than his first match.  Djokovic may have wrapped up this victory with elevated efficiency to avoid the rain that set back most of the other men, including archrival Rafael Nadal.

Bethanie Mattek-Sands:  Notching the most significant upset in the women’s draw so far, this revitalized veteran knocked off world No. 6 Li Na.  The 2011 champion here had produced mixed results this clay season, so the result did not astonish as much as it could have. Mattek-Sands weathered two rain delays and a fast start by Li to reverse the momentum midway through the match and finish it with ease.

Grigor Dimitrov:  This rising star set up a rematch of his Madrid thriller against Djokovic, whom he upset there in three sets.  More importantly, Dimitrov finally reached the third round of a major for the first time.  An accommodating draw helpd his progress, including an anonymous Frenchman in the second round.  Since Dimitrov also beat the rain, he will enter the Djokovic clash on full rest.

Samantha Stosur:  Dominant in the first round, the 2010 finalist  advanced routinely through a dangerous second-round match against a Frenchwoman on Court Philippe Chatrier.  Stosur has displayed traces of frailty in situations such as these that test a favorite’s nerves, but she never permitted Kristina Mladenovic a flicker of real hope. 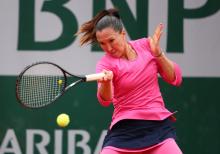 Jelena Jankovic:  The former No. 1 has reached three Roland Garros semifinals, like Stosur, and brings encouraging form to their third-round rematch of a 2010 semifinal.  Jankovic conceded just three games to young Spanish talent Garbine Muguruza, playing with more purpose than she often has during her decline.  Successes at small tournaments earlier in the clay season may have meant something after all.

Benoit Paire:  Among the many Frenchmen who have shone this week, Paire has built on the momentum from his Rome semifinal to reach the third round.  After he trailed Marcos Baghdatis by a set and a break since then, he has won six consecutive sets with uncharacteristically disciplined play.

Jamie Hampton:  Bouncing back from a marathon victory that reached 9-7 in the third set, she withstood any lingering fatigue with a more comfortable second-round win.  Outside Melanie Oudin’s first loss, in fact, American women have enjoyed their visits to Roland Garros more than most would have expected. 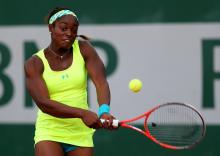 Sloane Stephens:  The Australian Open semifinalist and American No. 2 has shown signs of emerging from her recent slump this month.  A straight-sets win over Vania King moved Stephens within range of reaching the second week at Roland Garros, the site of her major breakthrough last year.

Paula Ormaechea:  Defeating last year’s quarterfinalist Yaroslava Shvedova, the Argentine qualifier echoed the form that she showed in reaching a clay final earlier this spring.  An intriguing contrast of styles in a third-round meeting with Mattek-Sands awaits.