As Roland Garros prepares to host the first group of quarterfinals, here is a look back at the survivors of Monday’s fourth-round action in Paris. 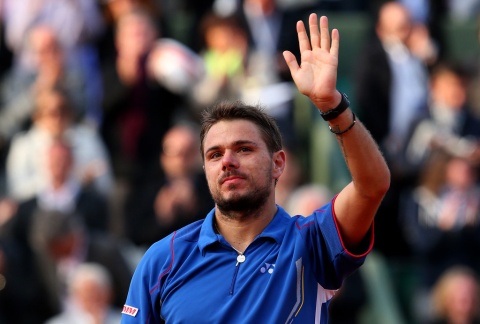 Stanislas Wawrinka:  Pushed to the brink by an inspired Richard Gasquet, Wawrinka nearly let his emotions unravel in the third set after losing the first two.  The Swiss No. 2 managed to contain himself just as his opponent’s dominance started to fray, enabling him to gain a toehold in the match.  Much improved this year against elite opponents, Wawrinka battled all the way back to his first Roland Garros quarterfinal by winning an 8-6 fifth set.  For Gasquet, the loss continued a career-long trend of commanding leads let slip away at majors. 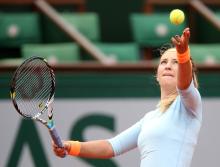 Third seeds:  Rafael Nadal continued his ascent back toward his familiar clay attitude after an ominous start to the tournament, brushing aside Kei Nishikori in straight sets.  Turning 27 on Monday, the birthday boy received a cake on Court Philippe Chatrier after his victory.  Although it was not her birthday, Victoria Azarenka created nearly as much cause to celebrate when she too rebounded from a pair of unimpressive efforts.  Reaching her third Roland Garros quarterfinal here, Azarenka soared past former champion Francesca Schiavone while losing only three games.  She will seek her first semifinal here against…

Russian Marias: …Maria Kirilenko, a mildly surprising quarterfinalist who emerged from Li Na’s section of the draw.  The less famous of the two Marias has compiled a quietly solid season, and she weathered the charge of dark horse Bethanie Mattek-Sands with her usual consistency.  A semifinalist at Indian Wells, Kirilenko will look to arrange a rematch of that semifinal against Maria Sharapova.  The defending champion has not lost a set through her first four rounds, despite a few shaky passages of play.  Her serving efficiency rose a notch in her victory over Sloane Stephens, excellent news for the future.

Serbs:  Saddened by the death of his former coach, Novak Djokovic did just enough to halt Philipp Kohlschreiber in four muted sets.  Djokovic resisted recurrent pressure on his serve, probably a product of his diminished intensity.  His compatriot Jelena Jankovic dismissed rising American Jamie Hampton for the loss of just two games.  Seeking her fourth Roland Garros semifinal against Sharapova, Jankovic has regained some of the form that once ranked her among the world’s best clay players.  Her efficiency here has contrasted with her recent struggles and allows her to conserve energy for later rounds.

Tommy Haas:  His victory could not have differed much more strikingly from the epic that he played against John Isner in the round before.  On Monday, Haas wasted little time in dispatching fellow veteran Mikhail Youzhny to set up an intriguing quarterfinal with Djokovic.  He will look to repeat his stunning upset over the Serb in Miami.