A rainy Tuesday meant a full schedule of play on Wednesday as the first round ended and the second round began. 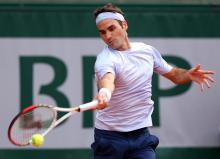 Men’s seeds:  All fifteen of those in action today advanced, the majority of them comfortably.   Leading the charge was Roger Federer, who has lost just twelve games through his first two matches.  Federer has faced unimpressive competition so far in two qualifiers, though, whereas top Frenchman Jo-Wilfried Tsonga defeated a more creditable in Jarkko Nieminen.  Fourth-seeded David Ferrer cruised for the second straight match, this time dismissing last week’s Nice champion Albert Montanes.

Victoria Azarenka:  Unable to start her Roland Garros 2013 campaign until Wednesday, Azarenka came onto Court Philippe Chatrier intent on delaying her progress no longer.  Her victory over Elena Vesnina continued a streak of six wins by the top four women’s seeds in which each has lost five or fewer games.  A healthy and determined Azarenka should plow through her next few opponents ruthlessly as well.

American women:  From the overpowering to the thrilling, they continue to leave their mark on the major least suited to them.  Top seed Serena Williams suffocated promising teenage talent Caroline Garcia, extending a stretch in which she has lost just eighteen games over her last seven matches.  The longest winning streak of Serena’s career shows no sign of ending, nor does the Roland Garros run of Varvara Lepchenko.  This lefty who has notched quality clay wins before reached the third round with minimal ado.  Of much greater drama was Jamie Hampton’s upset over 25th seed Lucie Safarova, which culminated in a 16-game final set.  USTA reciprocal wildcard Shelby Rogers also acquitted herself well in winning a set from Spanish clay specialist Carla Suarez Navarro.

Gael Monfils:  The beloved “La Monf” managed to rebound from a physically and emotionally exhausting marathon against Tomas Berdych.  Returning to Court Philippe Chatrier against Ernests Gulbis, Monfils caused his compatriots more angst by dropping a first-set tiebreak.  But he finished the match more comfortably than he did against Berdych, sweeping the next three sets from a dangerous shot-maker.  The draw has opened for Monfils to advance deeper than anyone would have thought after his dismal start to 2013.

Virginie Razzano:  A second-round comeback has positioned the woman who stopped Serena last year within range of the second week.  Razzano had accomplished almost nothing between these last two editions of Roland Garros, but Paris seems to have become a special tournament for her.  Up next is former champion Ana Ivanovic.

Sam Querrey:  The top American man had exited Roland Garros in the first round of five previous appearances while reaching the second round once.  This year, Querrey has recorded his best performance ever here, built upon consecutive straight-sets victories in which his opponents never threatened him.

Ashleigh Barty:  Playing her first main-draw match at Roland Garros, the Australian teenager notched her first career victory at a major.  It came against an opponent of note, moreover, for Lucie Hradecka had reached the final in Strasbourg last week.  Despite her lesser experience and ball-striking capacity, Barty outlasted the Czech veteran in three tightly contested sets.

Tommy Robredo:  The Spanish veteran rallied from a two-set deficit to win the last three sets emphatically, conceding just five games.  Robredo will battle Monfils in a fascinating contrast of styles for a slot in the second week.

Serbs:  The only notable upset on Wednesday belonged to Bojana Jovanovski, who ended the disastrous clay campaign of world No. 10 Caroline Wozniacki.  Jovanovski also defeated Wozniacki in Rome, so two of her three victories this spring have come in this matchup.  Floundering almost as much as she has this year, second-ranked Serbian man Janko Tipsarevic avoided a first-round disappointment by advancing in straight sets.  The unseeded Viktor Troicki joined him there with a five-set rollercoaster against clay specialist Daniel Gimeno-Traver, and Ana Ivanovic cruised into the third round with form much improved from her shaky opener.

Kaia Kanepi:  Last year’s quarterfinalist took a convincing step toward defending some of her points by defeating seeded opponent Klara Zakopalova.  Kanepi has established herself as one of the most notable dark horses in the women’s draw with increasingly impressive clay results, culminating with a Premier title in Brussels last weekend.

Andreas Seppi:  Halfway to repeating his fourth-round effort last year, Seppi has raised his level from tournaments earlier this clay season.  Slogging through consecutive five-set victories, he continues to create opportunities for himself.  What doesn’t kill you makes you stronger.